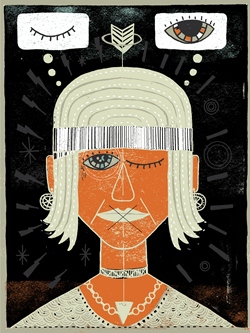 In 2011, performer Tannis Kowalchuk suffered a stroke. As she struggled with recovery and the profound shock to her sense of self, Tannis decided to do what she does best - collaborate with other artists to make a play. struck is an exploration of neuroscience and brain trauma. It is a poetic dance on the razor-edge of mortality, as the brain and body look for meaning and struggle to communicate, recover and re-discover the sense of "self" after a crisis. WORLD PREMIERE/DEVISED WORK. Coproduced by Cleveland Public Theatre and NACL Theatre this project has been funded by a widely successful Kickstarter campaign and represents CPT’s commitment to launching extraordinary works of theatre that will have an impact locally and nationally. struck will go on to perform a full run at the prestigious HERE Arts Center in New York City December, 2013.

Directed by Ker Wells, this moving tale of one woman and the journey into her own mind and its recovery features CPT favorite Brett Keyser (Darwinii, Open Mind Firmament) and Tannis Kowalchuk. Ker and Tannis were last seen at CPT in The Confessions of Punch and Judy. 7:30 PM
Opening Night Reception – mingle with the cast and crew after the show with free food and drink

In partnership with Cleveland Clinic Department of Physical Medicine and Rehabilitation.

“Keyser and Kowalchuk are arresting performers who are fascinating to watch…”
Andrea Simakis, The Plain Dealer

“If theater can be truly immersive-employing light, sound and movement in continually surprising ways-then “Struck” is the perfect example.”
Christine Howey, RaveandPan

“CPT’s production of ‘Struck’ is a blitzkrieg on your senses”
Mark Horning, Examiner.com