There Is a Happiness That Morning Is 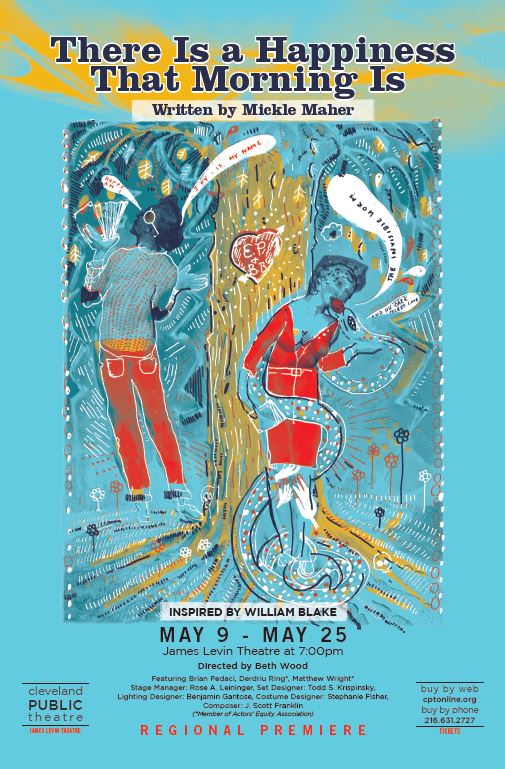 This contemporary comedy in rhymed verse about the difficulties and miracles of love is told via two lectures on the poetry of William Blake given by professors at a small, rural New England college. One lecture is given in the morning by Bernard, a middle-aged, barely published poet of scant scholarship, on the Songs of Innocence, and the other in the afternoon by his lover, Ellen, a reputable Ph.D., on the Songs of Experience. Having engaged the evening before in a highly inappropriate display of public affection on the main lawn of the college's campus, the two undergraduate lecturers must now, in class, either apologize for their behavior or lose their jobs. REGIONAL PREMIERE. Opening Night – Stay after the performance on May 10th to celebrate the opening of There Is a Happiness That Is with the cast and crew.

FREE BEER FRIDAY – Stay after the performance on any Friday performance to mingle with the artists and enjoy a FREE drink on CPT. Ellen and Bernard have been lecturing on the beauty of William Blake’s poetry at a rural New England college for the past 15 years and have been happily in love the whole time. But last night, something changed in an instant when Dean interrupted their moment of beauty – the moment when they were engaged in intercourse on the college’s lawn while reciting Blake’s poetry.

Now, in the light of day, they have a choice; apologize for the public display of affection in their classes or lose their jobs. Each use Blake’s Songs of Innocence and Songs of Experience in their lectures, but they go in opposite directions; questioning the validity of their 20 year love affair, life and the benefit of partnership in the midst of crisis.

Will their love survive? Will they keep their jobs? Or can one man save the day?

I first saw Mickle Maher’s work at Theatre Oobleck in 1993, when I went to visit the incomparable performer Lisa Black in Chicago. The show was called Gone, an imagined purgatory-like afterlife in which you could drink and eat, but there were no holes in your body to urinate or defecate. It was a crazy show and had that frenetic, half-mad quality that so many of the Oobleck shows had back then. Later, I saw Mickle perform an amazing one person show about a theatre company doing a musical biography of Spiro T. Agnew. More recently I sawSpirits to Enforce, an uncanny play about a group of super heroes that are doing a telethon to raise money to underwrite their crime fighting-the center piece of their fundraising appeal: a staged production of The Tempest which they are producing themselves. In this wild and moving play that takes place entirely at long tables with phones, Mickle delivered the best opening of The Tempest I have ever seen on stage. So, I have been watching for some time for the right project to do here at CPT and thrilled to be bringingThere Is a Happiness That Morning Is to stage.

We all have moments in our lives that when reflected upon, we can see how that moment transformed us. The collection of these moments make us who we are-ever-evolving, conscious and loving human beings. But sometimes those moments are so soul-shaking that they make us question everything we believed to be true.

This play is about one of those moments. When their moment of beauty, poetry and love is abruptly interrupted, Ellen and Bernard are flung to two extremes. Ellen is thrust into darkness, devoid of everything she once loved and held dear; Bernard floats into a heightened sense of joy, where everything he loves is raised to an almost ethereal level.

Existing in an extreme, even for a moment, prevents us from finding truth and meaning, because there is a duality to reality that is undeniable. Whether it is the duality of sadness and joy, hatred and love, or experience and innocence, truth is most easily found when we strike a balance between the two. It is a beautiful, human quality to bounce between extremes, but what happens when you get stuck?

The journeys of Bernard and Ellen reflect a common struggle we all experience – finding our way to a balanced duality. Few succeed in finding the perfect balance, but it is during the search that we make the most important discoveries about ourselves and the world around us.

Thank you for joining us for these lectures on the poetry of William Blake and our search for balance.
– Beth Wood

Click here to listen to the full hour of Around Noon

There is a duality to reality that is undeniable. From innocence to experience. From paradise to the fall. William Blake (1757-1827) encompasses this dialectic as one of the most prolific Romantic poets to write, to paint, engrave, etch and love. A mystic who saw supernatural visions from boyhood, Blake was largely unrecognized during his time due to his certain “madness” – as deemed by his contemporaries for his unique views. Two hundred years later, his genius is recognized and celebrated.

Going against common conventions of the time, Blake believed in sexual and racial equality, justice for all, and abhorred oppression in all its forms. Blake is heralded as a prophet for the free love movement; known to entertain nude, Blake was a free-spirit who spurned the stricture of institutionalized religion in favor of his own sincere spirituality rooted in the Christian mythos. This profound faith bleeds through in all aspects of Blake’s work.

The Songs of Innocence and Experience is an illustrated collection of poems by William Blake. “Innocence” and “Experience” are definitions of consciousness that rethink Milton’s existential-mythic states of “Paradise” and the “Fall.” Blake’s categories are modes of perception that tend to coordinate with a chronology that would become standard in Romanticism: childhood is a time and a state of protected “innocence,” but not immune to the fallen world and its institutions. This world sometimes impinges on childhood itself, and in any event becomes known through “experience,” a state of being marked by the loss of childhood vitality, by fear and inhibition, by social and political corruption, and by the manifold oppression of Church, State, and the ruling classes.

We want you to join in the conversation about this show by video-taping yourself reading your favorite William Blake poem or quote and post it on CPT’s Facebook page.

Need help finding a Blake poem? Go herehttp://www.poemhunter.com/william-blake, then grab your webcam, phone or flipcam and record yourself (doesn’t need to be fancy), post it on youtube and share the link on CPT’s Facebook wall or upload directly onto our event page.

Check out the Facebook Event Page for more information!