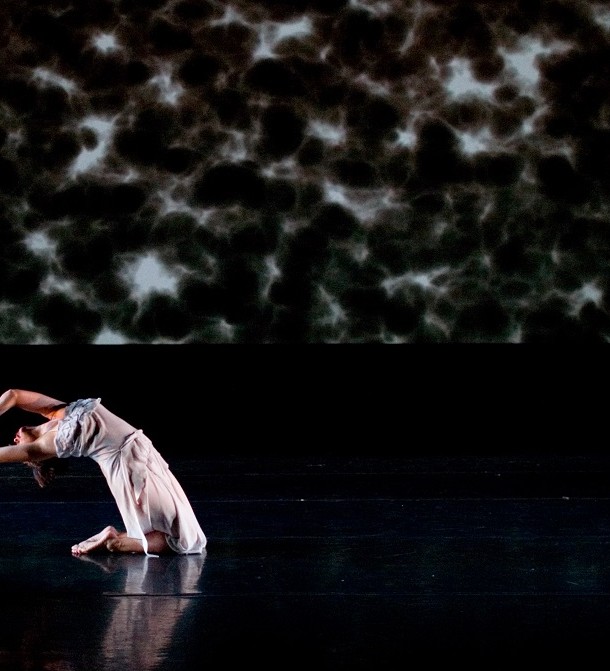 *cloud elegy will be performed by Sarah Lass Thursday and Saturday night and by Jackie Pitts on Friday night. Double-Edge Dance presents works of vigor and fragility in their split bill at DanceWorks 2013. Cry-i-i-ing, a quintet that was performed at Kennedy Center May 2012, will be a gem amongst other gems in this body of work. Other works showing in this program are the powerful duet Boomerang that combines daring physical intensity with vulnerability and intimacy and was recently performed in NYC. Three new solos, including ieyeyou and cloud elegywill premiere at CPT Danceworks 2013 along with other works. Double-Edge Dance is a contemporary dance and music company co-founded in 1993 by choreographer/dancer Kora Radella and composer/saxophonist Ross Feller. They have performed their work throughout the U.S.A. and in the Netherlands, Switzerland, Spain, Belgium, England and Scotland. Double-Edge Dance has been based in Ohio for the last eight years and has performed at Cleveland Public Theatre, PlayhouseSquare, Ingenuity Festival, Columbus Dance Theatre, OhioDance Festival Showcase, Kenyon College, Kent State University and Oberlin College, as well as at the Intermedia Festival in Indianapolis, North Carolina Music Festival, Ball State New Music Festival and the American College Dance Festival among others. Double-Edge Dance works with contradiction and juxtaposition, layering materials and images including idiosyncratic movement invention, unpredictable phrasing and disorientation paired with point-on precision. Artist Bio:
Kora Radella is the artistic director of Double-Edge Dance. Radella also recently formed boomerang to promote the work she choreographs in collaboration with Matty Davis and Adrian Galvin. She is an assistant professor of dance at Kenyon College and holds a B.F.A. and M.F.A. from the University of Illinois at Urbana-Champaign as well as a two-year advanced diploma from the School for New Dance Development (SNDD) in Amsterdam, The Netherlands. She studied choreography at Jacob’s Pillow under full scholarship with Bessie Schonberg, for whom the dance awards, the Bessies, are named. Radella has an extensive repertoire of work that has been performed, well received and reviewed, in Belgium, England, The Netherlands, Scotland, Spain and Switzerland and the USA. She has received numerous choreographic grants and was honored with the Ineke Sluiter Prize for choreography in Amsterdam. Radella’s work focuses on the resources, the memories and sensations, within the body. Her specialty is what she calls ‘awkward grace’ – the integration of idiosyncratic motion with musical phrasing, compositional form, and performance depth. Her movement research often spirals around the edge of being out-of-control to emphasize physical necessity and a psychologically precarious balance. Other areas of her research include improvisation in performance, work with theatre, somatic principles applied to modern dance technique, contact improvisation as a practice for 3-dimensional body awareness and yoga that integrates her skills as a dance educator through embodied practice. “A natural experimenter, with relationships on and off stage, Kora is thoroughly equipped to carry out the expedition she proposes and arrive at the destination, having mapped the entire journey. And we could all make use of her maps.” (Christina Svane, Choreographer, Performer, and Teacher). Join Marquez Dance Project as they explore life’s moments through an artistic scope and tries to recapture moments that are compelling to the human spirit both physically and emotionally. Phrases such as “fall and recover,” “falling off,” “fall over laughing”, “fall from grace” and “fall in love,” are all different examples of its use. This simple word is utilized to describe varying actions, while the meanings are completely different.

Marquez Dance Project‘s ( MDP) creative process involves a theatrical and often surreal interpretation through dance. In developing choreography, it is essential to explore beyond the realm of dance for inspiration, and collaborate with multiple artists’ genres to facilitate in producing meaningful and provoking works.

Creating a strong foundation within the community is also an essential component to the groups work. They have focused on bridging performers and community members together in workshops and master classes. During these opportunities, community members experience what happens behind the scenes and they develop an understanding of the creative process and intensive work ethic of artists. Additionally, MDP’s hope that through these shared experiences and exchanges, they will become strong advocates for the arts. Artist Bio:
Jennifer Sandoval has presented her choreography nationally in the cities of Cleveland, Cinncinati and Chicago through T.J. & Company Dance Theatre, Dance Chicago, Around the Coyote, Full Circle, Ruth Page Center for Arts, Galaxie Gallery, OhioDance, Cleveland Public Theatre, Morrison Dance Company and MamLuft Dance Company. Her work has taken her abroad to Avignon, France where it was performed at the International American Dance Choreographers Showcase. Her work has been described as beautiful and fierce. Jennifer continues to redefine her movement style always pushing herself to move outside the box.