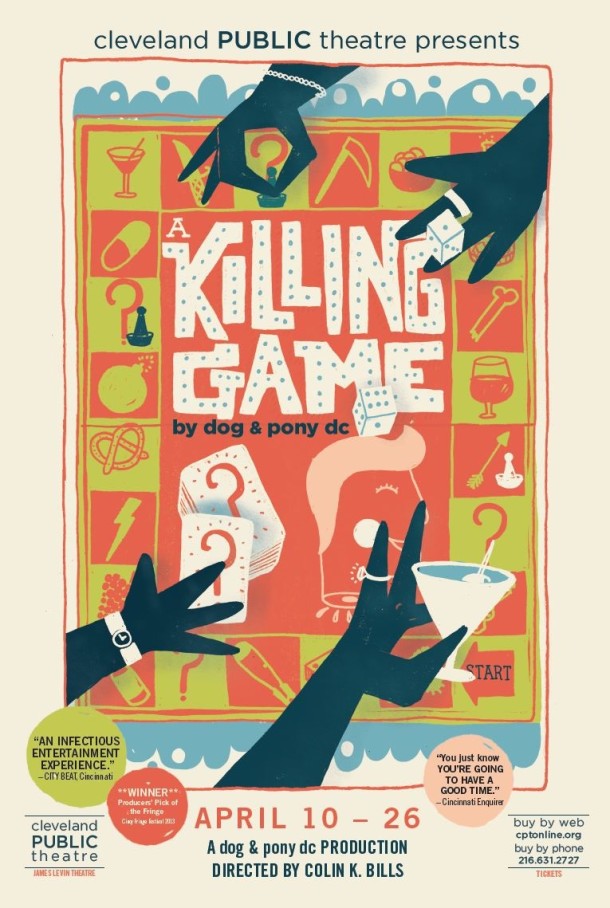 "A Killing Game" is a theatre-meets-party-game in an evening of laugh-out-loud fun! Actors and audience work together to combat a mysterious plague that is killing all the citizens— inexplicably, indiscriminately, and fast! Styled after game shows and fashion from the 1960s, "A Killing Game" arrives in Cleveland via dog & pony dc, a quickly rising ensemble known for their quirky productions that involve everyone in the fun. What to Know Before the Show!
A Killing Game, as the name suggests, incorporates some game-play. The fun dying-repeatedly kind. You can play as actively and enthusiastically as you want, or taken in the kooky chaos unfold about you. But remember: points are awarded not only for successful completion of each round but for demonstrations of excitement, creativity, and fearless play.

A Killing Game weaves smartphone-based media—Twitter, texts & good old-fashioned calls—into the narrative. Therefore, we highly encourage you bring a smartdevice or cell phone when you attend. For insight into the show’s creation, visit dogandponydc.tumblr.com or #killinggame or @dogandponydc on Twitter.

Inside scoops about the social media in A Killing Game is available here. You can find all the character Twitter handles here; following them now will make the Twitter-game-play easier at the show.

The show runs approximately 1 hour and 20 minutes with no intermission. You’re invited to come early and stay late, as the CPT bar will be open before, during and after the show!

dog & pony dc wishes you the best of luck and see you at the theatre!

Bored? Take a Look at Interesting Board Game Lists Your Favorite Classic Board Games, Then and Now

What Your Favorite Childhood Board Game Says About You

Reviews from Past Performances
“Anchored by seven spirited and hilarious performers, A Killing Game constantly finds humor in the everyday… Perhaps the only thing more enjoyable to watch than the actor (and this is a big perhaps) is the audience. Watching audience members ham it up is an absolute treat, and it’s a testament to the performers that they coax the inner grandstander out of so many.”
-Washington City Paper Fringe & Purge (July 2013)

“You know a performance is good when all the crazy, seemingly out-of-control moving parts add up to an infectious entertainment experience.”
-Cincinnati’s CityBeat (Cincy Fringe, June 2013)

“Sometimes you walk into a theater and by the time you get to your seat, you just know you’re going to have a good time… A Killing Game is tight and sharp… zippy and chaotic and manages to be both cynical and optimistic.”
-Cincinnati Enquirer (Cincy Fringe, June 2013)