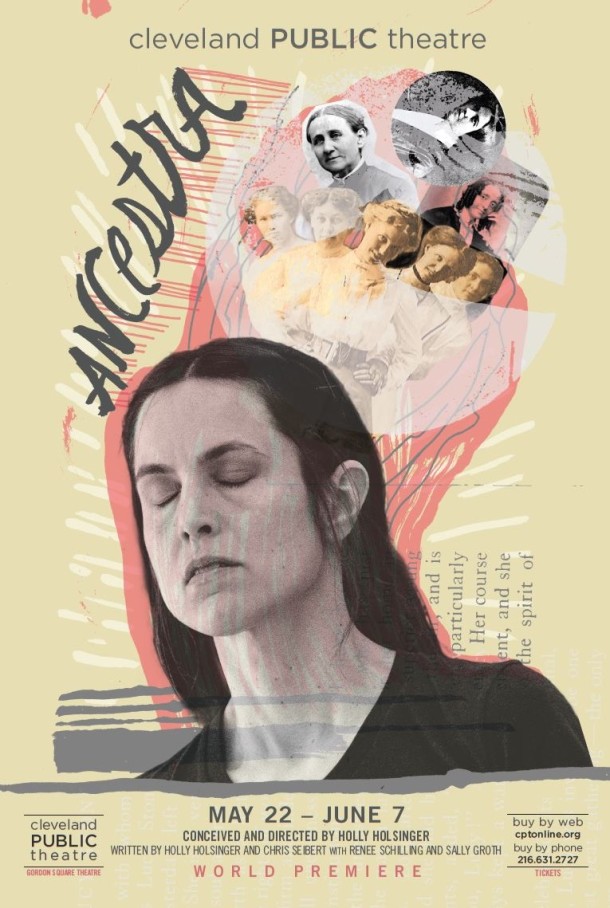 2 hours with a 15 minute intermission

Inspired by the 1853 National Women's Rights Convention in Cleveland, Ohio, "Ancestra" weaves a historical account with the intimate biography of a contemporary woman. "Ancestra's" compelling story provides a forum for intellectual engagement with important issues of our time: gender equity, women's health care and reproductive rights. Featuring a multi-generational, multicultural cast, this emotionally-charged performance celebrates those who came before and champions current efforts to achieve dignity and justice. WORLD PREMIERE/NORTHEAST OHIO CREATORS. An Excerpt from an Interview with Holly Holsinger and Chris Seibert

CHRIS
The Ancestra team is researching and debating women’s rights issues today amongst ourselves in order to figure out what the play should contain, in order to best represent the different sides so it feels like a true discussion on and off the stage. Ancestra is metamorphosing.

CHRIS
That and the research each individual actor will do on these historical characters will help inform the script as well. We have an incredible amount of research but you get 10 or 12 more people in a room, they’re going to unearth things that we couldn’t find. And that’s going to be amazing. And of course that will change the play. We’re still discovering things and we only have a little play. And that’s what’s frustrating- we can’t put everything in there!

CHRIS
Yes, there’s just so much! There are many interesting women who we’ve never read about in our history classes! Who are SO important.

CHRIS
Who are so incredibly cool.

HOLLY
Right. And everything that happens in our historical story is based on true things that happened. We might have just massaged time or place.

CHRIS
And the show will feature actors cast as some of the women who were at the convention, based on a whole chunk of information about how they lived their lives leading up to the convention and what came after. These women were extraordinary

HOLLY
And they come from all different places CHRIS
and they risked their lives to be there. They were risking their lives.

A Note from Sally Groth about Research

“I currently have out 20 books out from the library for Ancestra research.
The best books have to stay in the library. You have to find them, then order them from restricted areas or somewhere off-site (one librarian called it their Area 51, and then chuckled) and they come to you in little grey or blue boxes and seem to cause a good deal of excitement. The librarians at the Cleveland Main Library have been very helpful. century. Another one, well, it is likely I am the only person still alive who has opened that book. There are all sorts of rabbit holes one can fall into doing research there.
I’ll scan some portraits of a few of my friends from 1853 for you later today.
-Sally”

Links from Holly and Chris Two articles recommended by Holly Holsinger:
The Media Has a Woman Problem and A Feminist Kant

A Map recommended by Chris Seibert:
Mapping the State of Women in America

The State of Women in America Article
How is our state faring? (Check out the Ohio Article Here) “Ancestra is a well written play that gets an excellent production at Cleveland Public Theatre. It is a story that needs to be told.”Roy Berko, Cool Cleveland