can i touch it? Shay Solomon’s got a lot going on between trying to find funding for her daughter to go to college, trying not to fire an opinionated rogue employee who happens to be her niece, and dealing with the white banker who’s trying to touch her hair—that is, her Black beauty supply store which is on the brink of foreclosure in the midst of ongoing neighborhood gentrification.

can i touch it? takes an often-humorous look at the politics of the Black hair care industry while prompting a dialogue about the inequities that entrepreneurs face within a community on the verge of forced change. NNPN Rolling World Premiere.

The James Levin Theatre is ADA-compliant featuring a patron elevator and an all-gender, wheelchair-accessible restroom.

About the DIRECTor: INDIA NICOLE BURTON 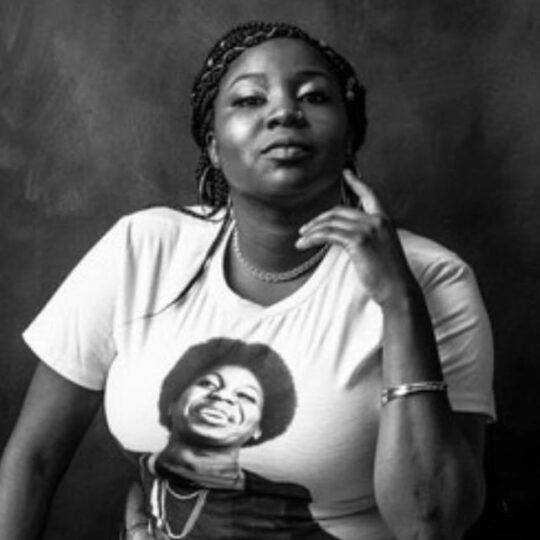 India Nicole Burton is an actress, director, playwright, devisor, and producer. She is a native of Akron, OH, and graduated from The University of Akron in 2011 with a BA in Theatre Arts with an emphasis on performance. Upon graduating, India founded Ma’Sue Productions, an African American theatre company located in Akron. She has directed, produced, and performed in several of Ma’Sue’s plays and was co-artistic director until 2015. India recently ended a virtual national tour of American Dreams by Leila Buck in 2020, where she played the role of Briana Coffman. She originated this character when it had its world premiere at Cleveland Public Theatre in 2018.  India’s directing credits include for colored girls who have considered suicide / when the rainbow is enuf (Heads Up Productions), The Laramie Project (Heads Up Productions), Daybreak’s Children (Ma’Sue Productions), A Happening on Imperial (Ma’Sue Productions), Fire on the Water (Cleveland Public Theatre, co-directed); Panther Women: An Army for the Liberation (in development at Cleveland Public Theatre), “inside out” by Francisca Da Silveira (Company One, as part of their C1: Inauguration project), Welcome to the Taj Mahal (Motel) by Riti Sachdeva at The Playwrights Center (Workshop). India’s assistant directing credits include the 2014 production of The Color Purple at Karamu House, A brownsville song (b-side for tray) at Dobama Theatre, and Cleveland Public Theatre’s Barbecue and Good at Heart, featured in BorderLight International Theatre + Fringe Festival. India is a board member for New World Performance Lab, a two-year recipient of the NNPN Producer in Residence program for Cleveland Public Theatre, and a 2021 recipient of the NNPN Bridge Program grant. She was also a cast member of American Dreams, which was nominated for a Drama League Award in 2021. India is currently receiving her MFA in playwriting from The University of Nebraska’s Creative writing program.

In partnership with the National New Play Network (NNPN), can i touch it? is produced at Cleveland Public Theatre as part of a NNPN Rolling World Premiere. For more information, please visit www.nnpn.org.

NNPN is an alliance of professional theatres that collaborate in innovative ways to develop, produce, and extend the life of new plays. NNPN’s Rolling World Premiere Program supports three or more theatres that choose to mount the same new play within a 12-month period, allowing the playwright to develop a new work with multiple creative teams in multiple communities. The playwright is part of the process, working on the script and making adjustments based on what is learned from each production. Click here for more information.