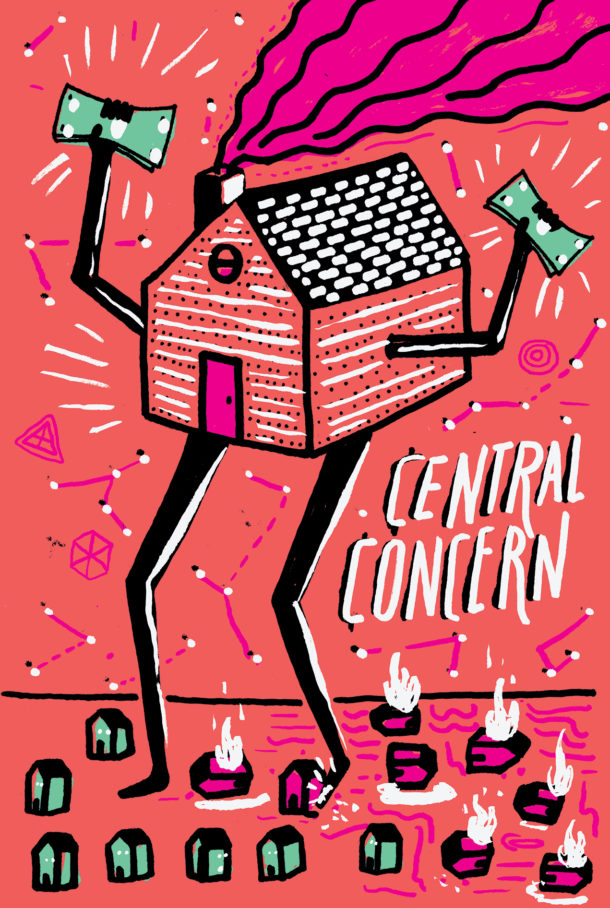 Using music, humor, and bizarre bouffon theatricality, Central Concern is delightfully depraved and entertaining. Central Concern takes a satirical look at the history of the American real estate profession and how it championed property values at the expense of civil rights. World Premiere.

Please note: this show is highly interactive! Read more below to get a sense of what the Central Concern experience is like.

You, the Audience Member

The Central Concern experience is like… stepping onto the pages of a comic strip. Get ready to be entertained by a band of bouffons who break the barrier of the fourth wall—allowing (and encouraging) audience members to be active participants in their experience. Bouffon theatricality, which uses distorted body shapes, costumes, humor, and mockery to make fact-based comments about society as a whole, is a modern French theatre term re-invented in the early 1960s by Jacques Lecoq at his L’École Internationale de Théâtre Jacques Lecoq in Paris. Read more about bouffon theatricality here and here. The word “bouffon” comes from the Latin verb buffare: to puff, to fill the cheeks with air, to deform oneself, to swell in order to provoke laughter. While the audience laughs at your typical clown, a bouffon laughs at (and is constantly fascinated by) the audience. And that means: you are part of the cast! Your presence is what will make Central Concern come alive.

Every performance of Central Concern will be followed by a post-show discussion. Join us for these important conversations after the performance. 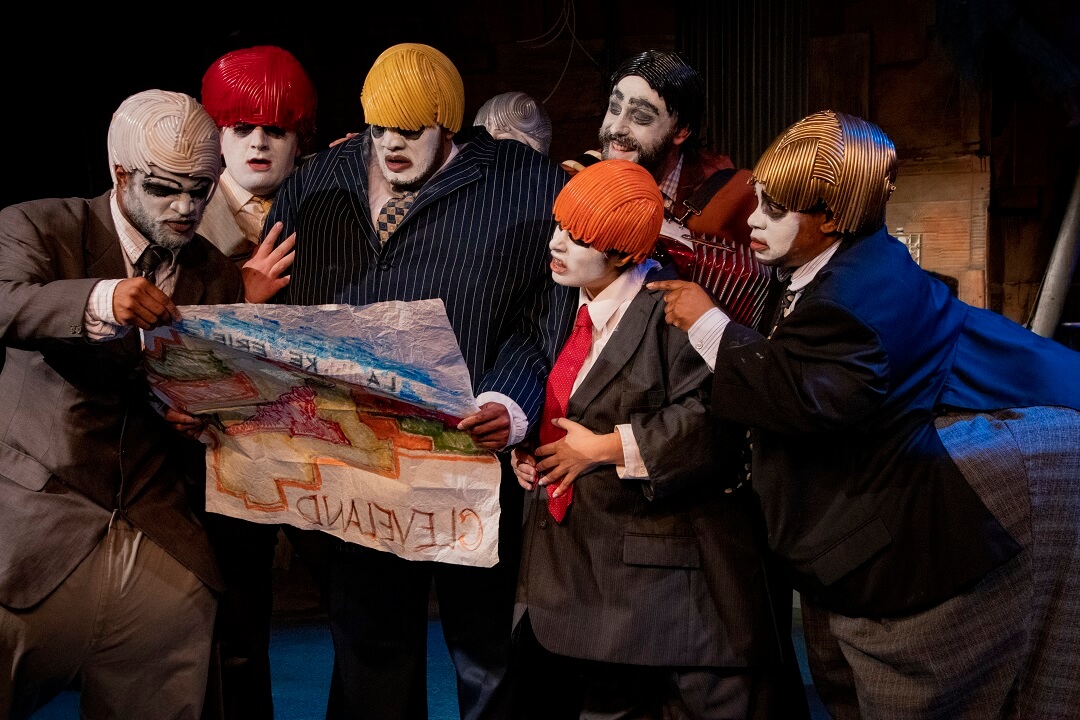 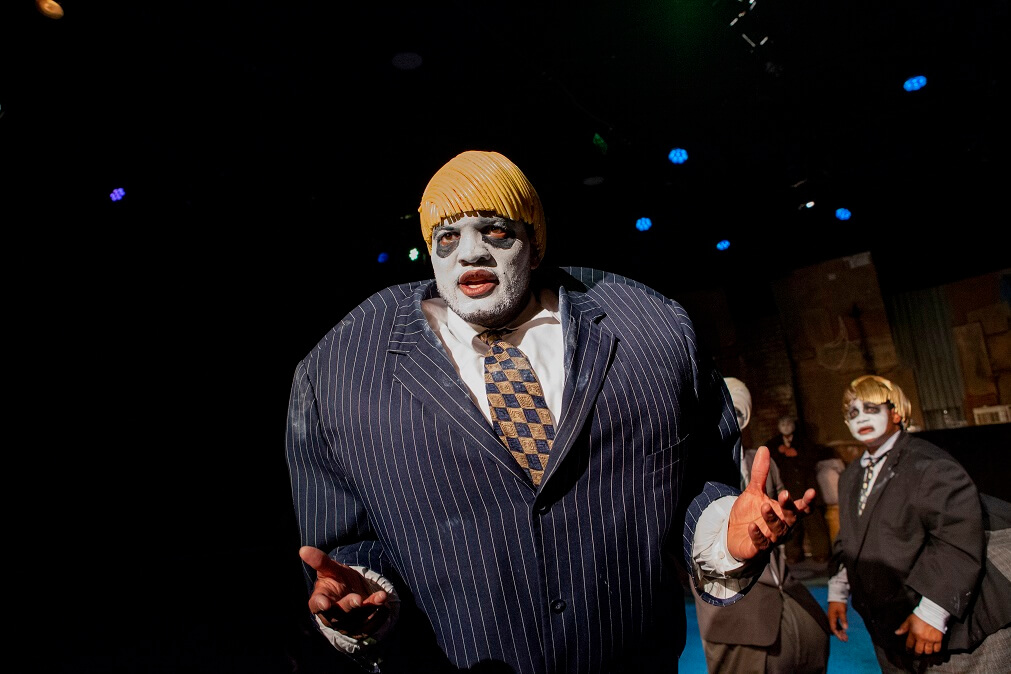 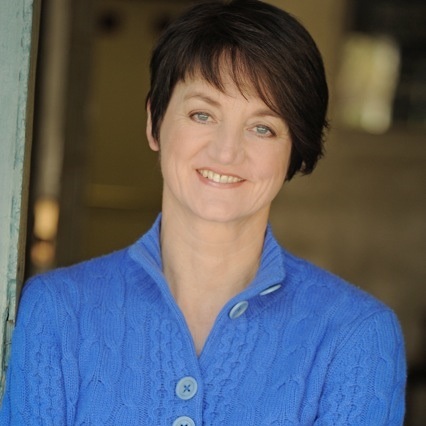 Ohio City Theatre Project is committed to pursuing excellence and building community through creative innovation, mentoring, and civic involvement. OCTP strives to create visceral theatrical experiences that are not just thought about, but are deeply felt. OCTP takes on important contemporary issues that are hard to grapple with and provides opportunities for transformative exchange where we can converse and feel through these issues collectively with our community. www.ohiocitytheatreproject.com

“Imagine if Bertolt Brecht and Kurt Weill’s political satire Three Penny Opera told the story of how the real estate industry impacted segregation in Cleveland. Then picture this musical play living inside the delightfully grotesque world of a Hieronymus Bosch painting. Central Concern aims to be edgy, funny, and entertaining.”

A co-production with Ohio City Theatre Project, Central Concern is inspired by the madcap boom, bust cycles, and Cleveland’s real estate industry, taking us from Moses Cleaveland and the Connecticut Land Company to the present day “great inversion.” Through a playful exploration of history, this world premiere production finds parallels and influences shaping our current political culture and leadership. 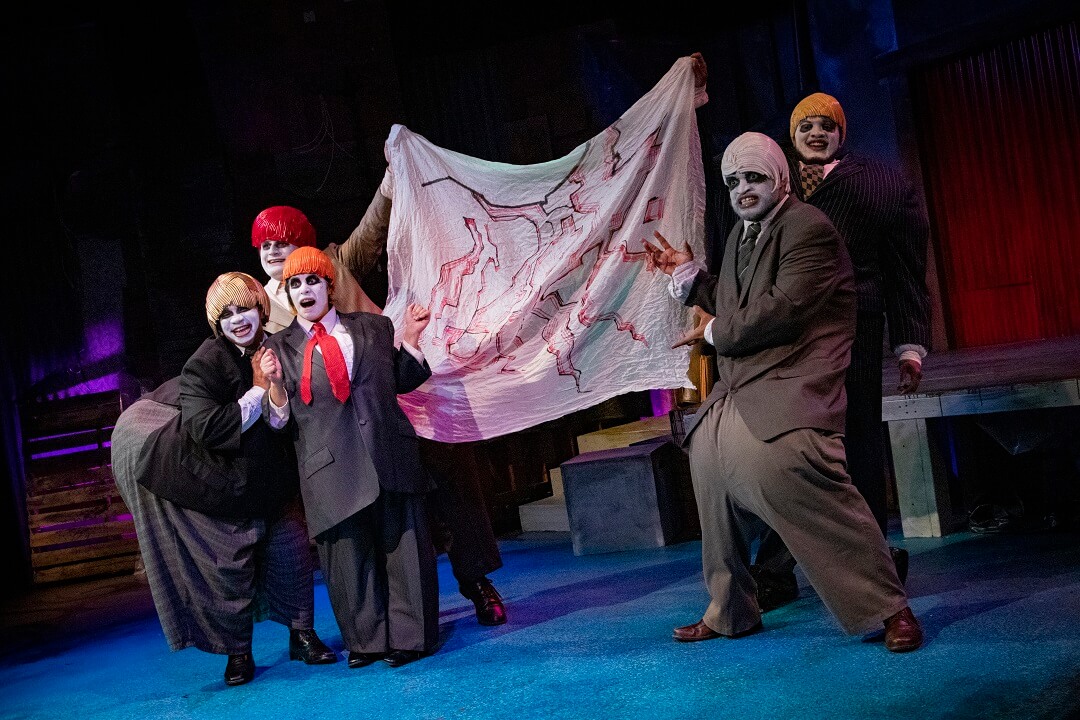 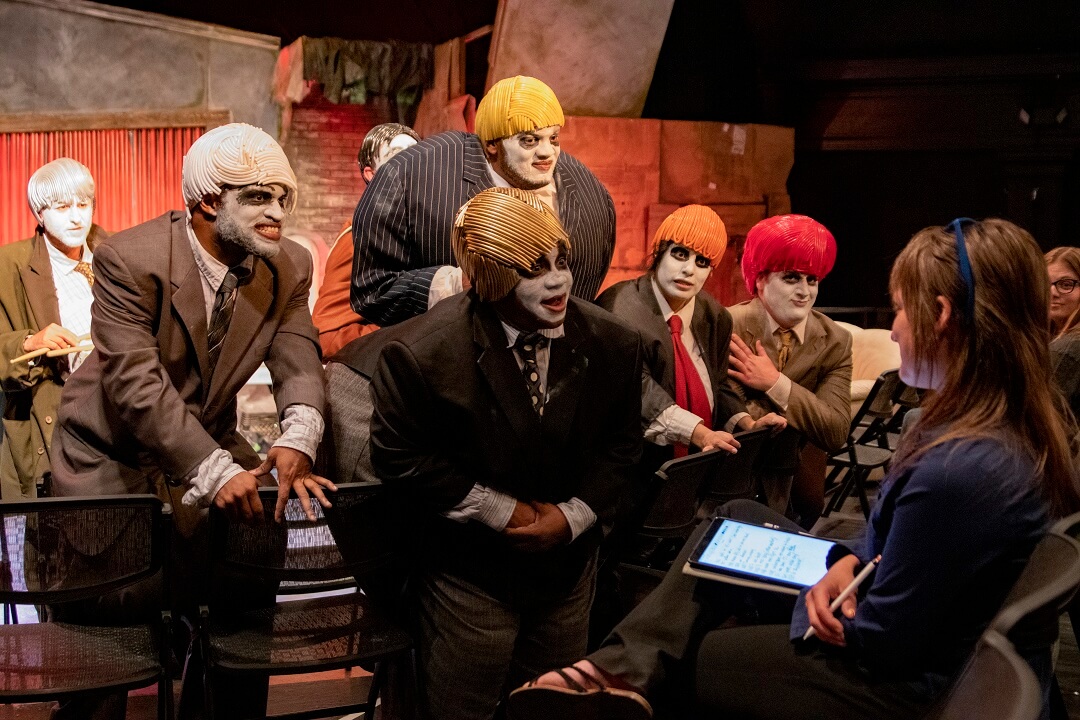 A Message from Pandora

In early 2016 after we finished Incendiaries, a co-production with CPT based on the race riots that tore through Cleveland’s Hough neighborhood in the late 1960s, it felt like the area of Cleveland history in relationship to segregation, and social justice, had momentum and it needed to continue. I just didn’t want to leave it alone. Incendiaries is about a particular 6 days of history… well, what was the history before that 6 days? It didn’t happen in a vacuum.

Originally, I was going to explore the history of Cleveland’s Central neighborhood (which is where the name Central Concern came from), or the idea of gentrification. And then I read Richard Rothstein’s essay “The Making of Ferguson,” and I thought: this has to have happened in Cleveland. I wanted to create a piece about institutionalized racism… how do you make that theatrical without lecturing people? Institutionalized racism is the water we swim in. So I focused on the real estate industry in Cleveland.

Social justice really speaks to my heart. It’s a way for me, and I truly believe for many artists, to get outside of our own bubble and look at yourself and our community from the field. Exploring issues of social justice has this ability to expand your emotional life, and your spiritual life—and not without its vulnerability and pain, of course. Instead of your heart being as big as your fist, it can become as big as a lake. 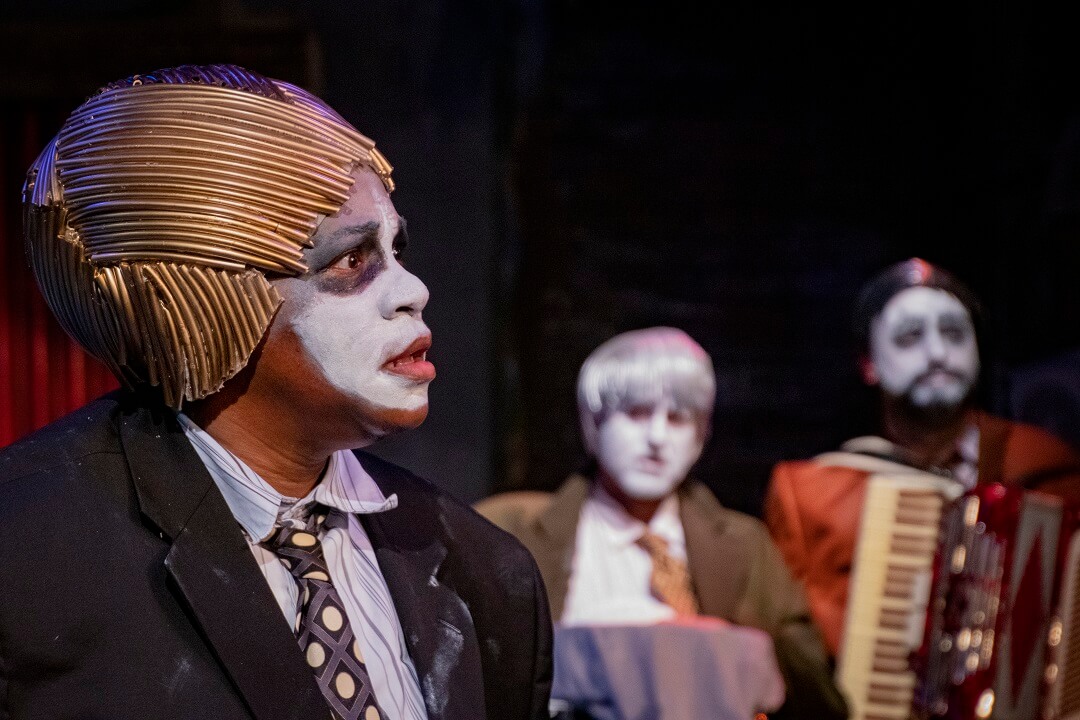 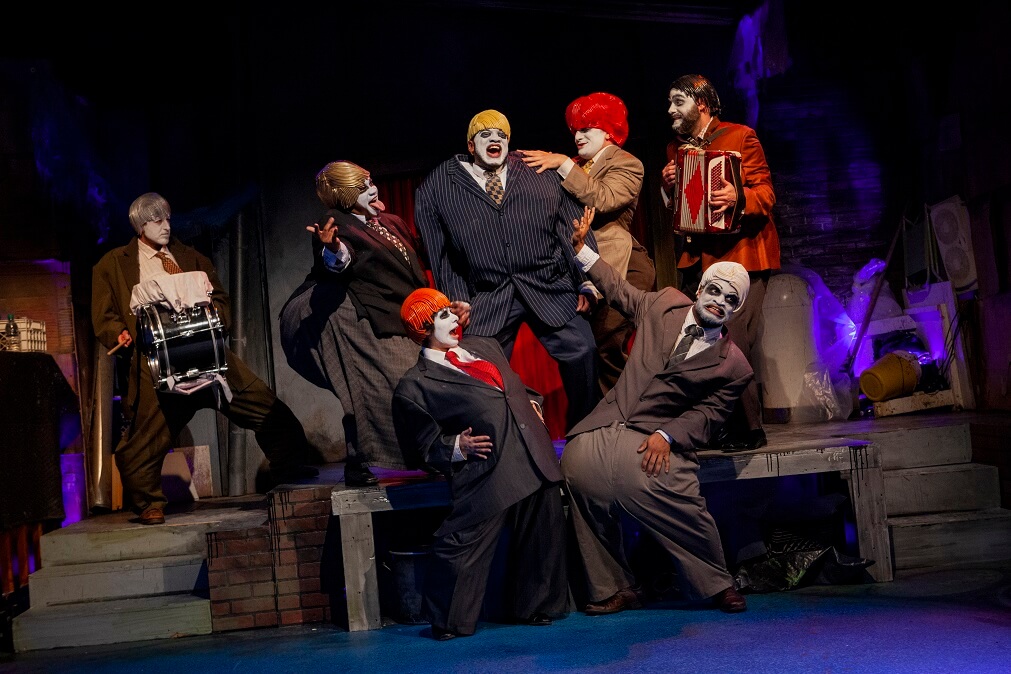 An introduction to bouffon theatricality

“At the heart of the bouffon is mockery pushed to the point of parody.” -Jacques Lecoq

Central Concern lives in the dramatic territory of bouffon, which uses distorted body shapes, costumes, humor, and mockery to make fact-based comments about society as a whole. Bouffon is a modern French theatre term re-invented in the early 1960s by Jacques Lecoq at his L’École Internationale de Théâtre Jacques Lecoq in Paris. 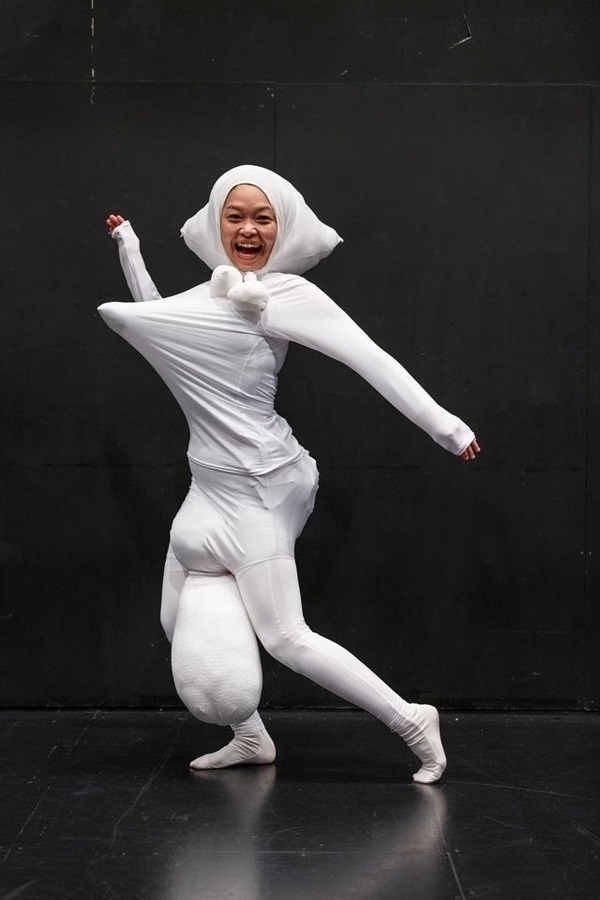 “Bouffons are not human, they are grotesque, immortal shapeshifters who live somewhere between humans and the gods. Nothing is sacred to them; they are endlessly entertained and fascinated by human fallibility. And as such, they live in a state of ecstasy in mocking.

The dramatic territory of bouffons and the grotesque is well-suited to take on big social themes and issues… In looking at the real estate industry’s boom and bust wealth creation cycle, we could say that it creates so much it destroys, and destroys so much it creates. Central Concern‘s band of bouffons disguise themselves as real estate men and take us through the madness and absurdity in this history.”
-Pandora Robertson, Conceiver/Director of Central Concern

Art you can feel

Like Central Concern, these works aim to provoke visceral sensations

“I’ve always been interested in art that was very visceral, like the work of sculptor Louise Bourgeois, or painter Hieronymus Bosch, who is one of the inspirations for Central Concern. How does a visual like that work? You look at it and go ‘Ughhhhh.’ I think putting that kind of very visceral, feel-it-in-your-body feeling together with social justice, which I think are the most pressing issues of our time, has the potential to be very powerful. 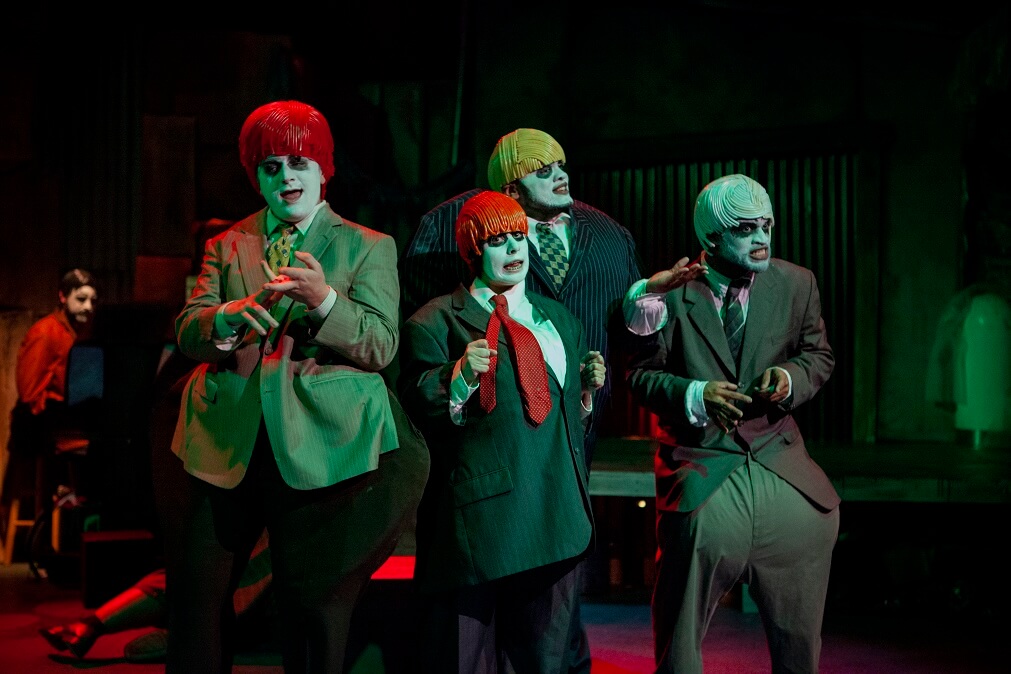 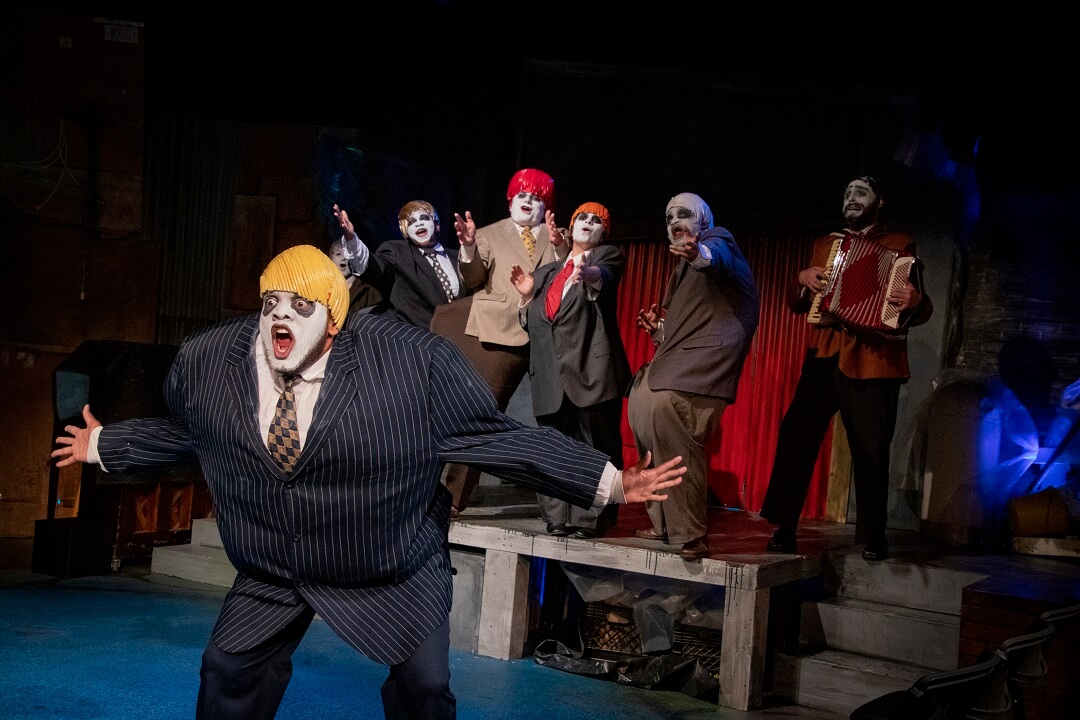 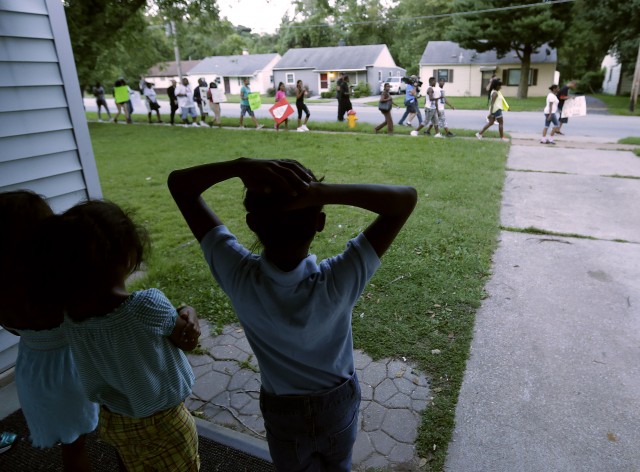 “That government, not private prejudice, was responsible for segregating greater St. Louis was once widely recognized. In 1974, a federal appeals court concluded, ‘Segregated housing in the St. Louis metropolitan area was… in large measure the result of deliberate racial discrimination in the housing market by the real estate industry and by agencies of the federal, state, and local governments.’ The Department of Justice stipulated to this truth but took no action in response. In 1980, a federal court ordered the state, county, and city governments to devise plans to integrate schools by integrating housing. Public officials ignored the order, devising only a voluntary busing plan to integrate schools, but not housing.

Although policies to impose segregation are no longer explicit, their effect endures. When we blame private prejudice and snobbishness for contemporary segregation, we not only whitewash history but avoid considering whether new policies might instead promote an integrated community.”

Click here or on the image to read the article that helped inspire the creation of Central Concern.

Brush up on your real estate terminology

Blockbusting is a method used by U.S. real estate agents of introducing African American homeowners into previously all-white neighborhoods and then using aggressive, racist scare tactics to panic the white property owners into selling their homes well below market value… and then selling those homes at a substantial markup to African Americans, whose alternate housing options were so grim, many buyers had no choice but to pay the inflated costs. Click here to read more.

Redlining is a discriminatory practice by which lenders refuse loans to borrowers living in specific neighborhoods. Lenders would literally draw a red line around geographic regions on a map—regions typically with a high concentration of people of color—and then deny loans to people living in those areas. Click here to read about the origin of redlining, spearheaded in the 1930s by the Federal Housing Administration (FHA) and the Home Owners’ Loan Corporation (HOLC), and click here or on the image to discover the reverberating effects of redlining in Cleveland today. 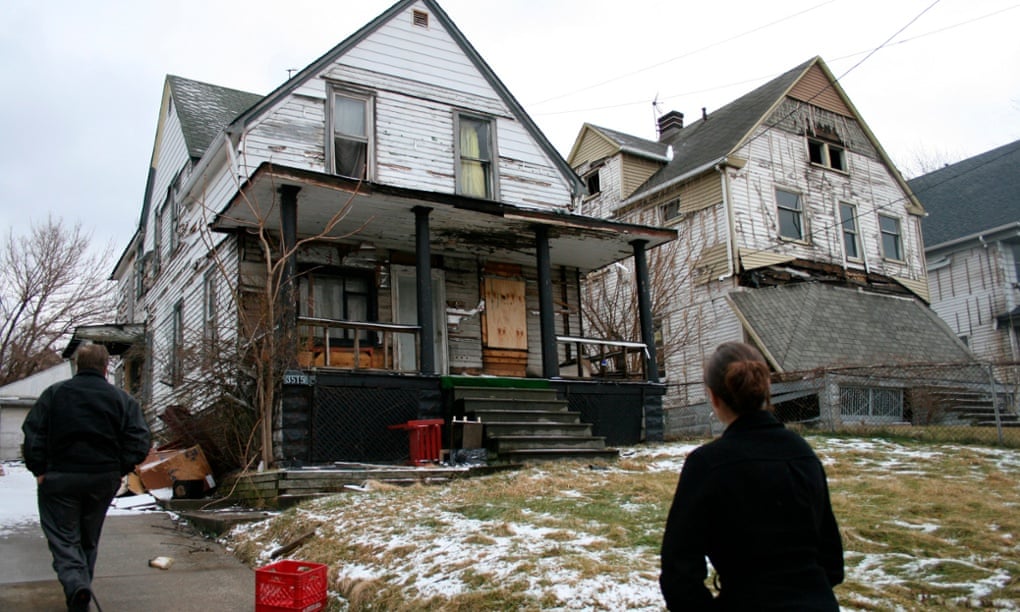 When the recession hit in the late 2000s, Cleveland’s Slavic Village was at the epicenter of the foreclosure crisis, thanks to a rise in subprime loans. Lenders would intentionally offer mortgages with high interest rates to people with low income or poor credit history, with the understanding that the borrower would likely default on the loan.

“Until the mid-1990s banks only lent to borrowers with more or less sterling credit. Now, with a quick spreadsheet calculation, lenders can find a loan to suit almost any customer—at the right interest rate, and often with outsize fees. Even if a few borrowers fail to keep up, banks will still make money since they can repossess and resell those properties.” -Alyssa Katz, Mother Jones

Subprime loans were responsible for 84% of the foreclosure lawsuits filed in Cuyahoga County from 2005-2006, according to a study by the Center on Urban Poverty and Community Development at Case Western Reserve University. Click here to read more on cleveland.com. 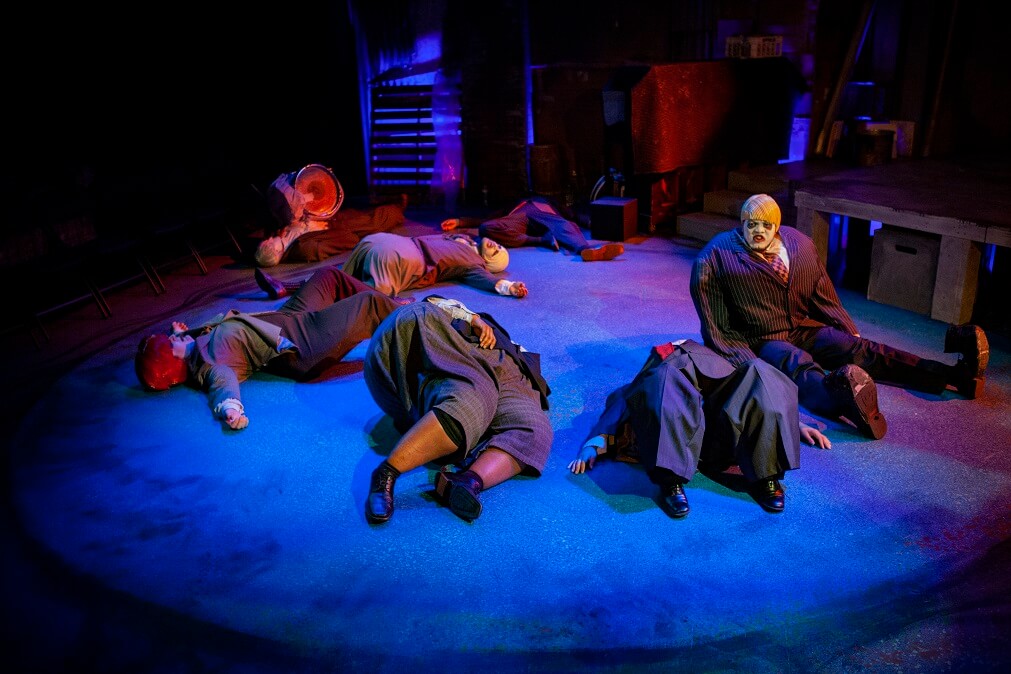 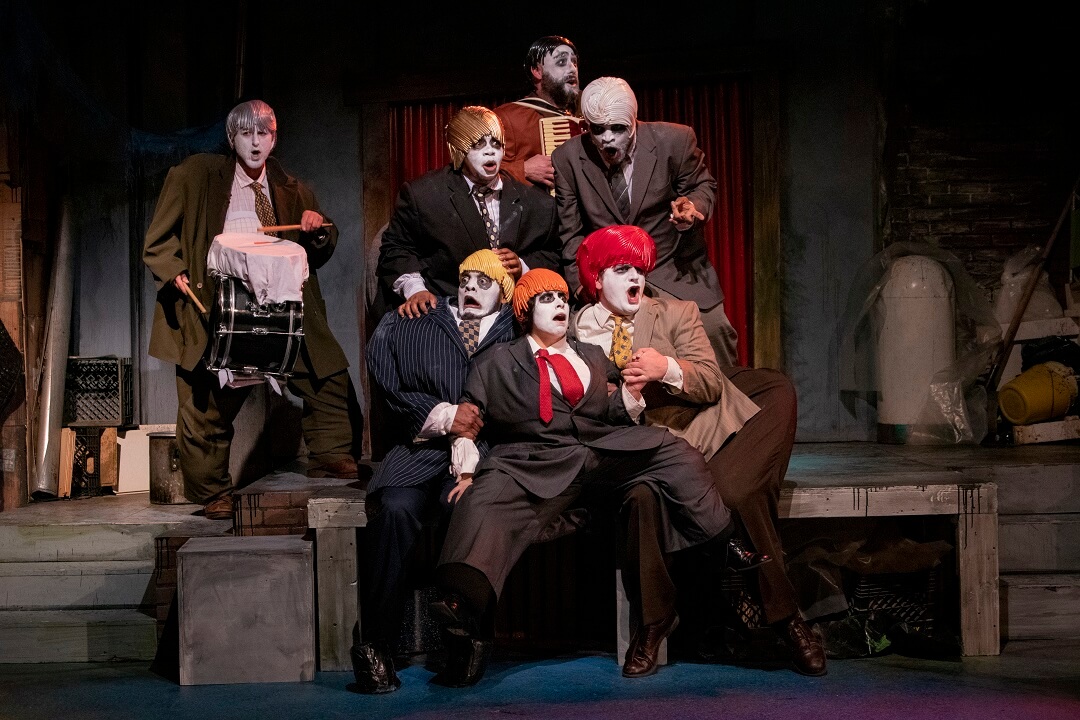 CENTRAL CONCERN is made possible through the generous support of 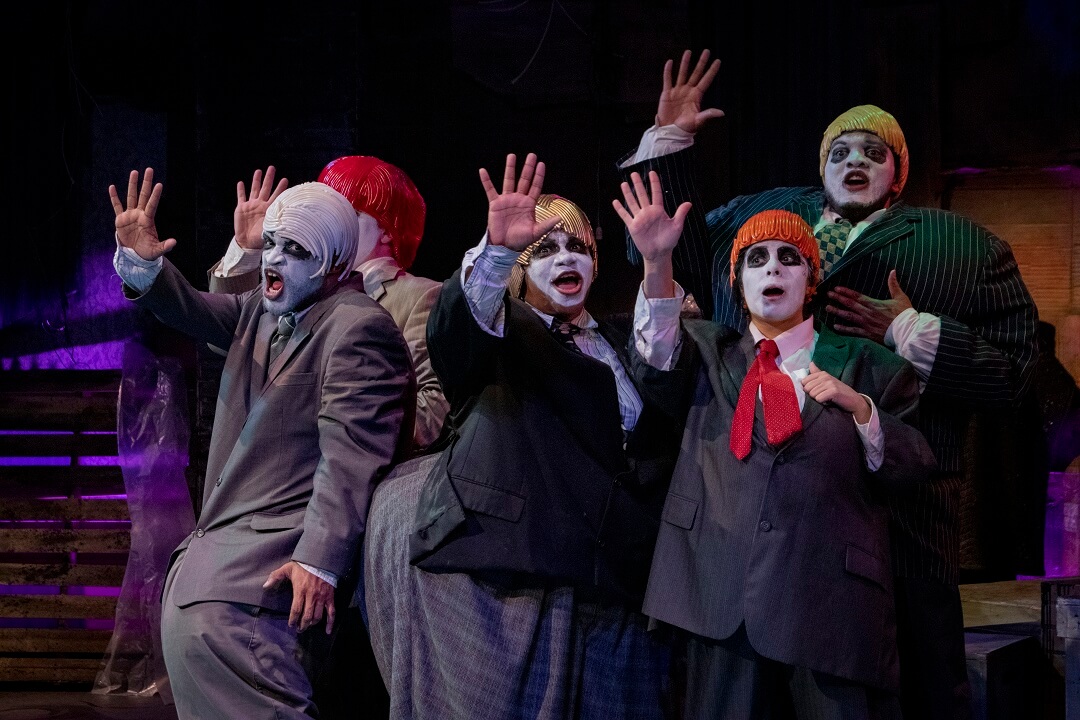 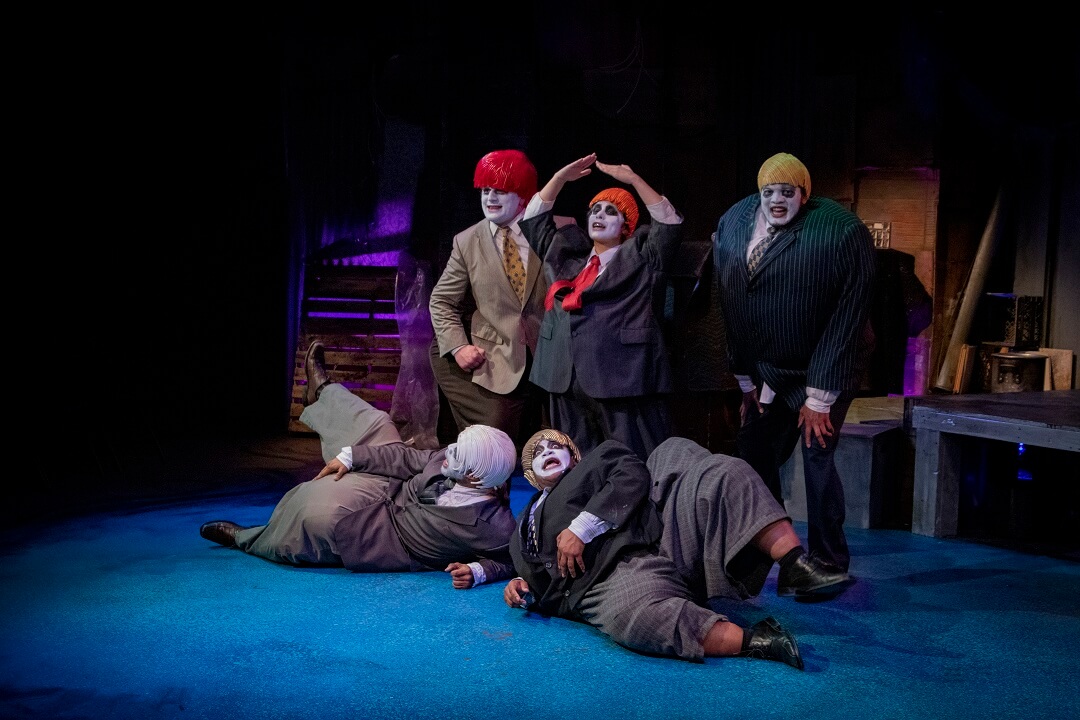 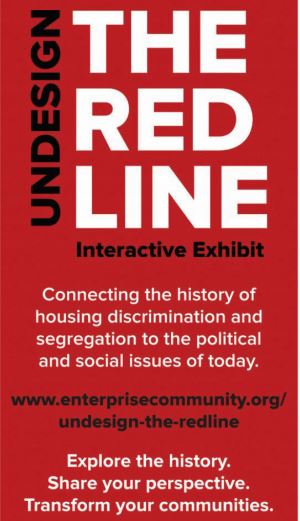 Undesign the Redline – AN interactive exhibit

Enterprise Community Partners, Cleveland Neighborhood Progress, and Detroit Shoreway Community Development Organization and Cudell Improvement Inc., are hosting Undesign the Redline, an interactive exhibit exploring the history of race, class, and U.S. housing policy, and how this legacy of inequity and exclusion continues to shape our communities. The exhibit seeks to spark public discourse on how discriminatory federal policies from the 1930’s continue to impact Cleveland neighborhoods today. 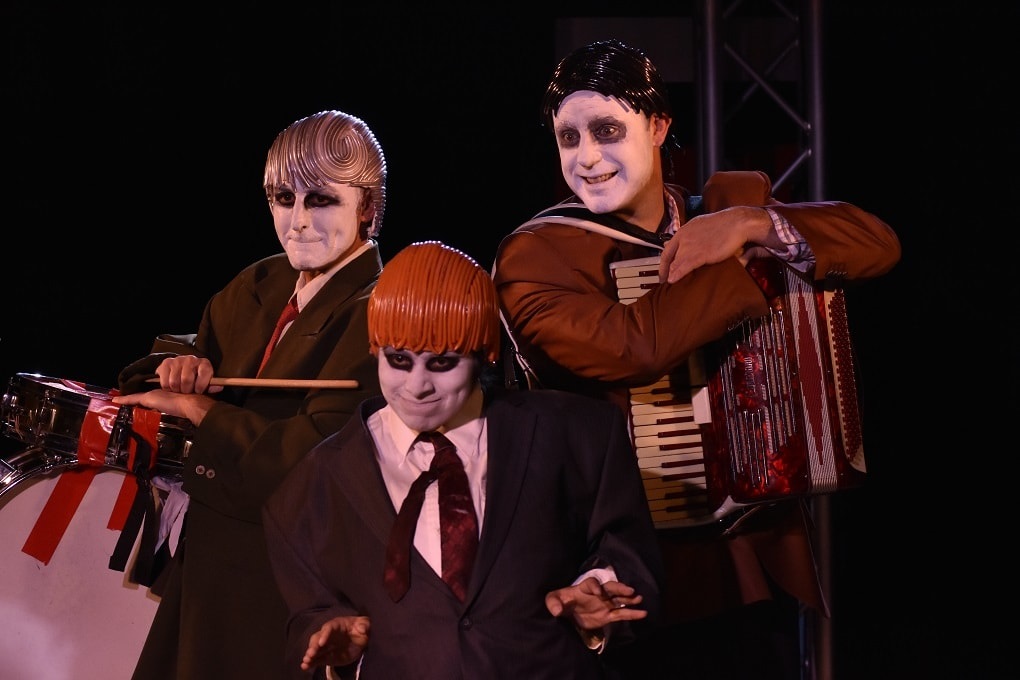 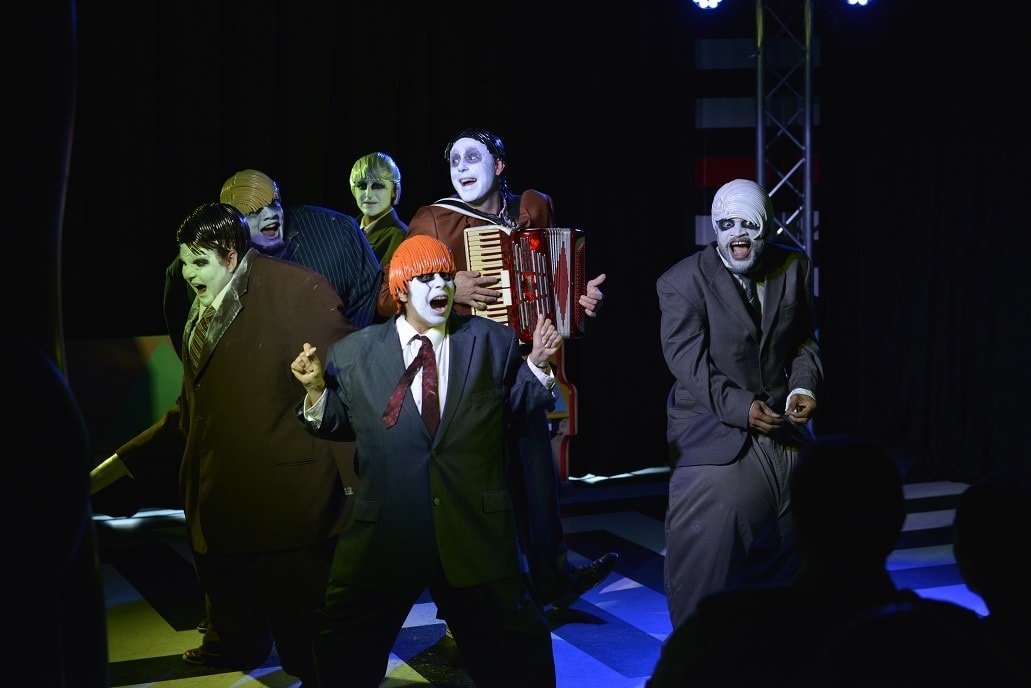 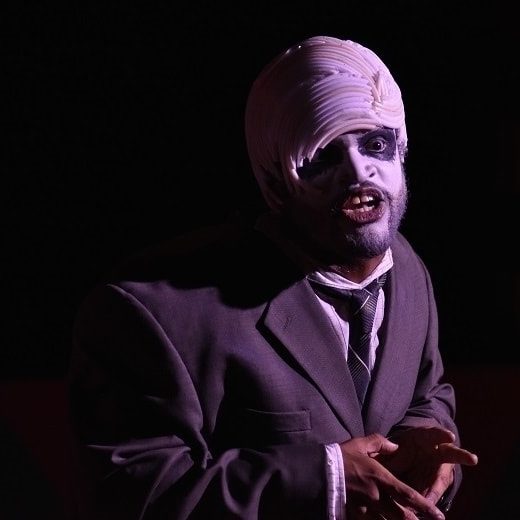 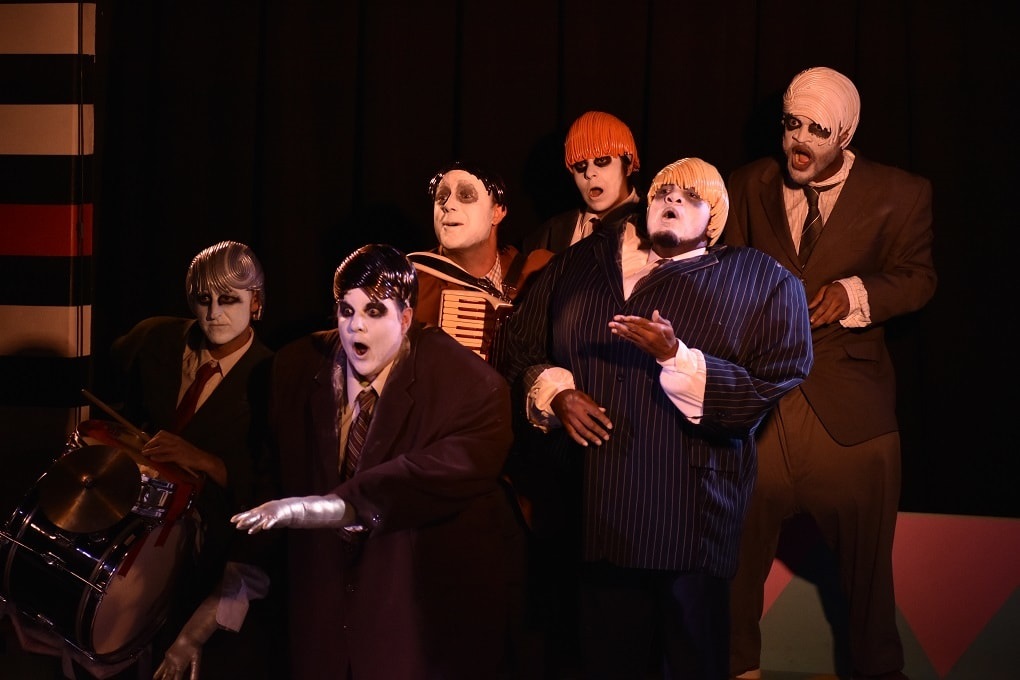