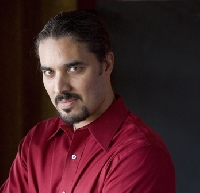 Cleveland Public Theatre is the place for bold, new, adventurous and relevant works of performance. The 10-11 season includes 4 World Premieres, another production straight from the New York Public, three Midwest Premieres, and a remount of one of CPT’s original works. CPT continues its ground breaking development series with 8 weeks of Big [BOX], the return of Little Box and the 11th anniversary of CPT’s acclaimed performance series DanceWorks.

CPT’s philosophy – that the arts can literally change the world – is actualized through strategic programming and investing resources in new plays and emerging artists that deal directly with relevant issues of our times. The mission of CPT is to raise consciousness and nurture compassion through ground-breaking performances and life changing educational programs.

Executive Artistic Director Raymond Bobgan says, “This season CPT is taking risks on new works that we believe are important and grapple with critical issues – and you won’t be bored. Theatre should never be boring. These are engaging performances that will make you think, laugh, cry, and ask for a second helping. Some will change your mind about what theatre can be. Did I say theatre? Maybe I meant to say, ‘dinner theatre.'”

Pandemonium 10: The Wild Side
The Book of Grace by Suzan-Lori Parks
Don’t Call Me Fat by Ozen Yula
Kill Will by Josh Brown and Kelly Elliott
Opera Per Tutti: Il Tabaro by Giacomo Puccini
Little Box
Y-Haven Theatre Project
Connie’s Avant Garde Restaurant by Miss Conni Convergence and the Avantgardists
Big [BOX] ’11
Darwinii by Glen Berger and Brett Keyser
NEOMFA Playwrights Festival
Women’s Voices
FEVER/DREAM by Sheila Callaghan
I Hate This and And Then You Die in repertory by David Hansen
Insomnia by Holly Holsinger, Karin Randoja, and Chris Seibert
DanceWorks 11
My Barking Dog by Eric Coble
Cut to Pieces by Raymond Bobgan and Chris Seibert