Cleveland Public Theatre Executive Artistic Director Raymond Bobgan is proud to announce the participating artists for the 2011 Big [BOX] series. Big [BOX] is an award-winning residency program produced by Cleveland Public Theatre that focuses on the independent creative artist and the exciting things that can happen when one is given the space and time to create. Now in its nineth successful year, Cleveland Public Theatre is proud to support and foster the work of area artists in this unique program. Over eight weekends, thirteen artists are given keys to The James Levin Theatre and the freedom to transform the space for the presentation of their work. 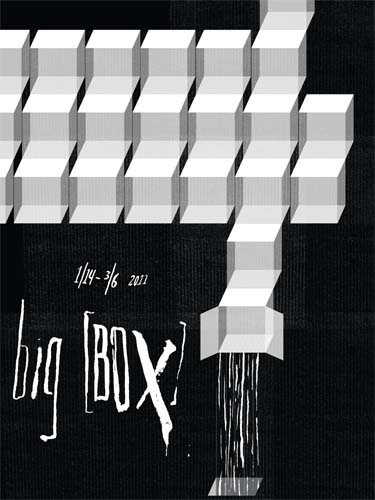 The goal of Big [BOX] is to support new work and local artists.

The writers, directors, actors, and designers selected for Big [BOX] dedicate themselves to creating new and original work, or stretching their artistic powers by working in new disciplines. The resulting performances are always amazing and well attended. Big [BOX] performances and artists often go on to receive larger exposure and production at CPT.

Experimental Orchestra, FiveOne Music aims to deliver an unforgettable night of sights and sounds when local visionary directors and composers unite. Sonic Cinema is a fusion of world premiere pieces and films accompanied by the music ensemble that Donald Rosenberg hailed as, “bursting with inventive, energetic spirit.”

Sonic Cinema will feature the world premiere of “Chronicles of Laughing Yesterday” by award-winning filmmaker and video artist Kasumi, a recent recipient of a Creative Workforce Fellowship, and one of Cleveland Magazine’s Most Interesting People of 2011.

Artist Bio:
FiveOne Music is a Cleveland-based group of sixteen composers and performers with a ‘no-boundaries’ approach to music. Our vision is to create a diverse stream of fresh, new-perspective musical works and to bring an intriguing meld of genres, styles, and artistic disciplines to usual and unusual spaces. Toward that end, we often position players around or within the audience, blend art music with rock, digital sounds or world music, and collaborate with other artists to produce innovative multimedia performances.

Kasumi is internationally celebrated as a leading innovator of a new art form synthesizing film, sound, video and emerging technologies. She has won global acclaim for her experimental films and video art in venues worldwide, from her Lincoln Center appearance with Pinchas Zukerman and The New York Philharmonic to live performances with Grandmaster Flash and DJ Spooky, and has performed and exhibited work at Württembergischen Kunstverein Stuttgart and at the Chroma Festival de Arte Audiovisual in Guadalajara, Mexico.

Kasumi’s recent premieres include “BREAKDOWN,” that debuted at Carnegie Hall with the American Composers Orchestra and later won the Vimeo Best Remix award; “Quadrascope,” performed with The Cleveland Orchestra at the Cleveland Play House’s 2010 Fusion Fest; and MO-SO an installation funded by a 2009-10 EMPAC Dance Movies Commission through The Jaffe Fund for Experimental Media and Performing Arts, Troy, New York. Her videoart installation, “Panoptical Delusions” debuted at the Ingenuity Festival 2010.