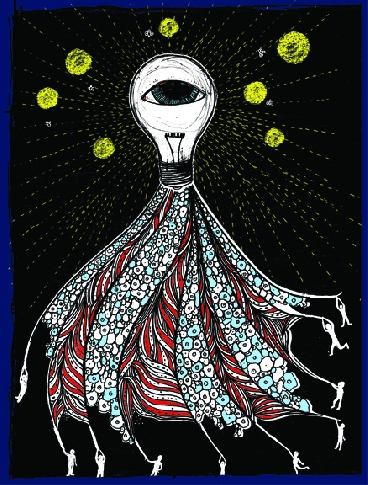 “I serve as a blank screen on which people of vastly different political stripes project their own views.” – Barack Obama, The Audacity of Hope

“I am an invisible man…simply because people refuse to see me.” – Ralph Ellison, Invisible Man

Black identity in America is complex. As poet Paul Laurence Dunbar suggested, we wear a mask to hide our true selves. And, in our struggle to live authentic lives, we often find ourselves invisible to others who thrust identities upon us. Never has this been more vividly brought to light than in President Barack Obama’s 2008 campaign. InCogNegro is a satirical look at Black invisibility on the national stage.

The parallels between President Obama’s political rise and Ralph Ellison’s classic 1953 novel about an unnamed African American’s search for self,Invisible Man, are striking. The purpose of this piece is not to provide a biographical look at President Obama; nor is it a theatrical adaptation of Ellison’s novel. The play explores what happens to one’s soul when others refuse to see one’s authentic self.

In a country founded on principles of equality, it is ironic that race remains a significant marker of social mobility, privilege, and identity; and retains the power to invite discrimination, condescension, and invisibility. During the campaign, pundits and voters alike viewed Obama through the prism of race while refusing to publicly acknowledge the impact of race. Like Ellison’s nameless protagonist, Obama became Messiah and Menace, Token and Terrorist, The One and The Other – his true self, invisible to the world.

UMOJA Arts (Umoja is the Swahili word for unity) is a company whose mission is to creatively build and maintain unity through the arts, education and business communities, with a particular emphasis on the development, preservation and celebration of the African American arts heritage.