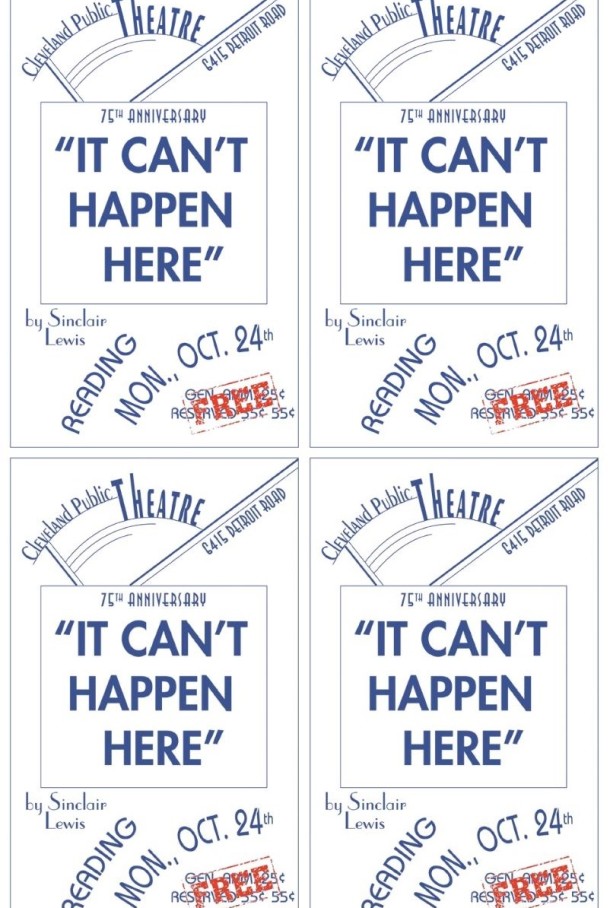 It Can’t Happen Here in 2011
The synopsis is simple enough; the good people of the United States, in dire economic straits, elect an attractive, populist senator as President of the United States, who immediately begins a number of social programs which we might recognize as Fascist: Newspapers are closed and unions are centralized by the federal government. The entire story is told from the perspective of a small town, and how these changes affect the citizens there.

The History of It Can’t Happen Here
The Federal Theatre Project, established under the Works Progress Administration (WPA), was the largest and most ambitious effort mounted by the Federal Government to organize and produce theatre events. To prove the scope of what the Federal Theatre was capable of, it was suggested that a large number of participating theaters across the nation open the exact same play on the exact same night.

Presented in 21 different theaters in 18 cities across the nation, each theater was encouraged to adapt It Can’t Happen Here to their locale, so long as the design did not strain to emulate specific persons or political parties. Adapted to take place in central Ohio, with references to Akron and Canton, It Can’t Happen Here opened on October 27, 1936 in Cleveland at the Carter Theatre (redubbed “Federal Theatre”) at East 9th and Prospect in downtown Cleveland. The run was so successful it was sold out for three weeks and only closed because a children’s puppet show was scheduled to take its place in December. Photo from the original New York production of It Can’t Happen Here in 1936.