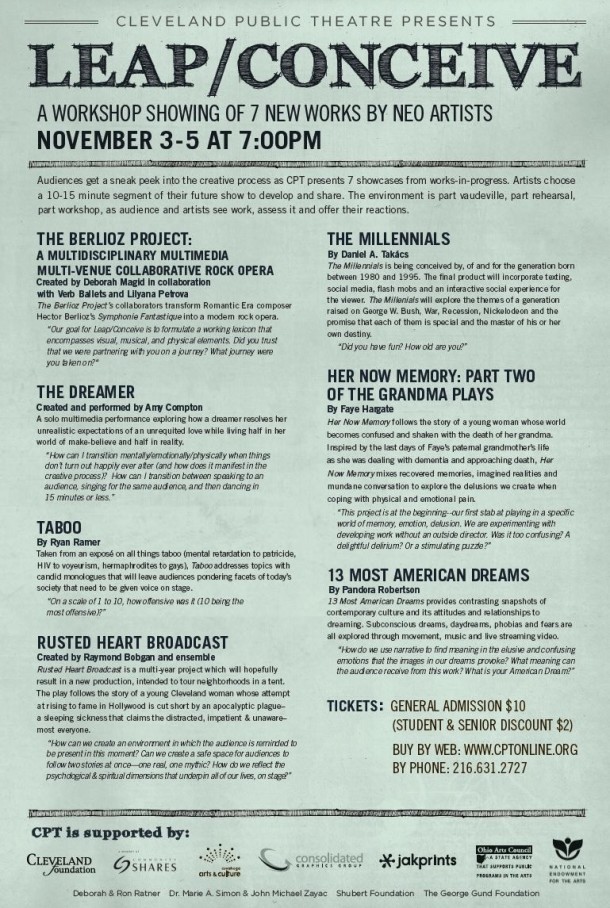 Leap/Conceive is a new development series meant to support work at the midpoint in the creation process. Leap/Conceive fosters the development of new performance and places a special emphasis on serving work that may not benefit from conventional staged readings or script workshops. Audiences get a sneak peek into the creative process as CPT presents 7 showcases from performances that are being developed by Northeast Ohio creators. Artists choose a 10-15 minute segment of their future production to develop and share. The environment is part vaudeville, part rehearsal, part workshop as audience and artists see the work together, assess it and offer their reactions.

Created and performed by Amy Compton
A solo multimedia performance exploring how a dreamer resolves her unrealistic expectations of an unrequited love while living half in her world of make-believe and half in reality.

Created by Ryan Ramer
This monologue is taken from a larger work called ‘Taboo’, an expose on all things taboo (mental retardation to patricide, HIV to voyeurism, hermaphrodites to child serial-killers). This selection addresses topics that will leave audiences pondering facets of today’s society that need to be given voice on stage.

Created by Raymond Bobgan and ensemble
Rusted Heart Broadcast is a multi-year project which will hopefully result in a new production, intended to tour neighborhoods in a tent. The play follows the story of a young Cleveland woman whose attempt at rising to fame in Hollywood is cut short by an apocalyptic plague-a sleeping sickness that claims the distracted, impatient and unaware-most everyone.

Created by Daniel A. Takacs
The Millennials is being conceived by, of and for the generation born between 1980 and 1995. The final product will incorporate texting, social media, flash mobs and an interactive social experience for the viewer. The Millenials will explore the themes of a generation raised on George W. Bush, War, Recession, Nickelodeon and the promise that each of them is special and the master of his or her own destiny.

Her Now Memory: part two of the Grandma Plays

Created by Faye Hargate
Her Now Memory follows the story of a young woman whose world becomes confused and shaken with the death of her grandma. Inspired by the last days of Faye’s paternal grandmother’s life as she was dealing with dementia and approaching death, Her Now Memory mixes recovered memories, imagined realities and mundane conversation to explore the delusions we create when coping with physical and emotional pain.

Created by Pandora Robertson
13 Most American Dreams provides contrasting snapshots of contemporary culture and its attitudes and relationships to dreaming. Subconscious dreams, daydreams, phobias and fears are all explored through movement, music and live streaming video.