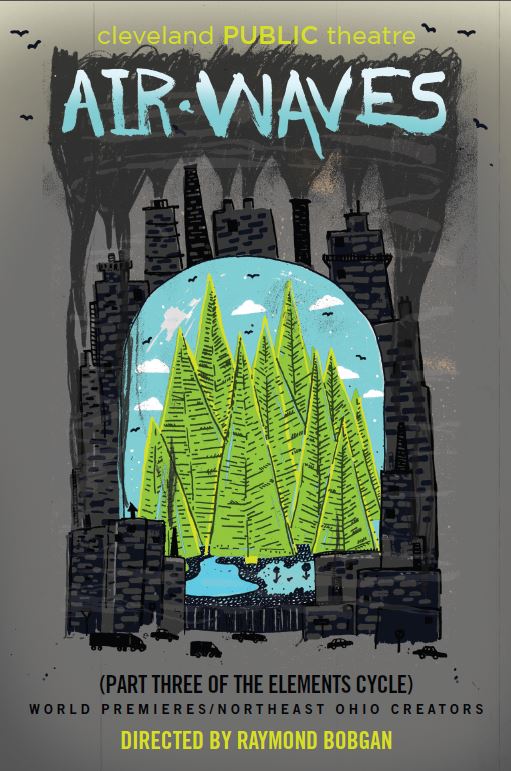 Directed by Raymond Bobgan
With Music Composed by Sean Hussey

"Air Waves" is a fantastical journey of wish-fulfillment that weaves sustainability themes into a uniquely theatrical experience. The lives of George, Jeannette and Kim (the spirited young women behind a city-wide initiative to buy the air over people's houses) intersect in this deeply moving new play, which features whimsical vignettes, original music and bold performances by Northeast Ohio's most adventurous theatre artists. Part Three of CPT's multi-year "Elements Cycle," "Air Waves" is designed to inspire new ways of thinking and provoke conversation that will continue long after audience members leave the theatre. WORLD PREMIERES/NORTHEAST OHIO CREATORS.

Scene 1: At the Tables and Into the House
Scene 2: Interlude Connecting, Created by Molly Andrews-Hinders
Scene 3: Airplane
Scene 4: Interlude: Air Pool
Scene 5: Walking Around:
a) Daryl and the Queen
b) Meditation
c) Subway, Created by Dylan Winter Dwyer and Raymond Bobgan
d) Interlude: Lost a Sense of Self, Created by Melissa Crum with Renee Schilling, Lauren Joy Fraley, and Nick Riley

Scene 1: At the Tables and Into the Mind
Scene 2: Interlude: Edison and Ford, Created by Caitlin Lewins with Stuart Hoffman, Lauren Joy Fraley, Cathleen O’Malley and Renee Schilling
Scene 3: This Is It

**Air Waves is generously sponsored by The National Endowment for the Arts and Cleveland’s own Great Lakes Brewing Company. Enjoy your favorite GLBC brews throughout the run!**

Other Artists Inspired by Air “Harmonic Fields” is an ensemble of 500 instruments, played by the wind. Harnessing this natural energy, life is breathed into the orchestra, creating a symphonic soundscape,unique to each visitor.”
Watch a video here. respond to the forces of nature – wind, water and light – and become inviting focal points for civic life. Exploring the potential of unlikely materials, from fishing net to atomized water particles, Echelman combines ancient craft with cutting-edge technology to create her permanent sculpture at the scale of buildings.”

What’s the State of Your Air? The American Lung Association has been analyzing data from air quality monitors for the last 14 years compiling a State of the Air report. Enter your zip code and see what your grade your air gets on the State of the Air Report Card.

Here you can read about the effects of Ozone and Particle Pollution (how does your grade affect your health?)

Check out the Clean Air Timeline to view facts and statistics surrounding the battle for clean air throughout the world, starting in 1948.

Infographic: Are You at Risk from Air Pollution? I: So, Raymond you mentioned in rehearsals the other day that the Air Forum were sort of like superheroes. Are you a graphic novel fan? Did you read comic books as a kid?

RB: Well, when I started collecting comic books, it was at the beginning of the Dark Phoenix saga, so it’s no wonder I’m sort of an old school X- men fan. Even though I was always wondering what’s up with x-MEN? Why not x-heroes or something? Especially since Storm and Phoenix were the most powerful of the lot.

I: Did you have a favorite?

RB: I think my favorite was Cyclops- because he had such a lame/limited superpower that was also a disability and super dangerous, and he was burdened by leadership and a tragic love. Plus, the whole “super-powered eyes” thing and I figured he was no one else’s favorite, so I could relate to that, too.

(for those of you who are saying “what is he talking about?”… you could start here: Dark Phoenix Saga orCyclops)

I: How does the graphic novel world impact your work?

And Air Waves has turned out to be a kind of graphic novel. I did not expect that! There is something about it flowing from normal to weird so quickly that you would never believe in a novel, but you kinda expect in a Marvel or DC universe. People have super powers, they go into magical places, and they try to bend time. There is a weird club called the Air Forum and they sort of have uniforms.

And it affects my work life, too. Sometimes, I feel like I live in a comic book because I am surrounded by superheroes. And that has been more clear than ever in the past month. Really, I should get the staff hero uniforms, because they are breaking laws of gravity and the time/space continuum.

I: (Plus your staff would look totally awesome).

RB: Yeah, but I’m not going to wear tights.

RB: Yeah, and honestly, the Air Waves cast members are superheroes- not only because they are all doing such amazing work on stage- but they also helped write the play. Plus some of the best parts are created by our Joan Yellen Horvitz directing fellows Melissa Crum and Caitlin Lewins, and Molly Andrews-Hinders. Just thinking about this, I start going through the cast- and I’m like- oh yeah, definitely superhero material. And the Air Forum sort of has uniforms.

I: Can you tell me more about the Air Forum?

RB: There is definitely some influence from Zoroastrianism. Actually, I don’t want to say more about this because it relates to my ongoing work- there are a series of through-lines that connect my different plays together, sort of motifs, but something very core, something I don’t understand myself.

Happy Valentine’s Day from the Air Waves Cast! from Raymond Bobgan on Vimeo.

“With song, creative movement, nightmarish poetry and imagery, we swirl around the theme in fascinating ways, bypassing language with experiences that drive straight into our dreams… This is a must-see, not just for environmentalists, but for caring people anywhere.”
Tom Fulton, SCENE

“[Director Raymond Bobgan’s] site-specific approach to the show’s staging keep[s] everyone on their toes as actors and audience alike are led through a series of escalating interludes that riff on the main theme. Kudos to the fearlessly phenomenal ensemble.”
Rich Stimac, inthelandofcleve