Doug is a D-Bag 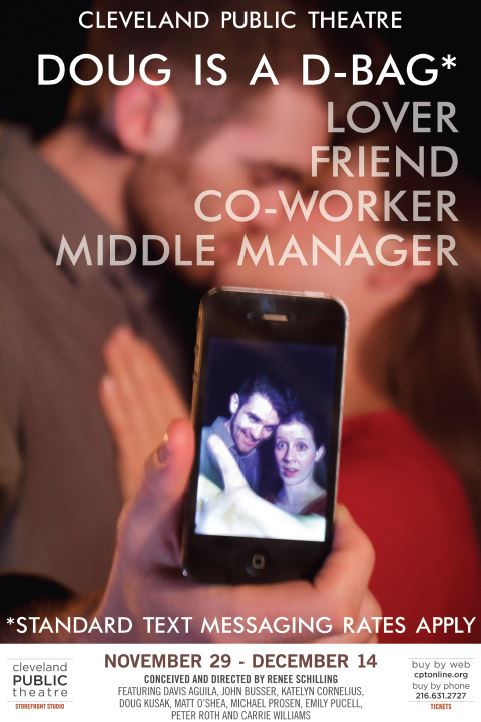 Conceived and Directed by Renee Schilling

Rules are made to be broken! This highly interactive devised work asks the audience to tune in and turn ON their cell phones. Set in an HR Company on an extraordinary Tuesday; join Lorie and Doug as they fall out of love and into a heap of trouble. Can they create a new rule book for cell phone technology and love in the workplace? (Audiences will keep their phones on and interact with the actors and each other through their phones. Standard text messaging rates apply). WORLD PREMIERE/NORTHEAST OHIO CREATORS.

There is a late night performance on Saturday, December 7th at 10:30pm. Patrons will receive one complimentary beverage before the show.

Songs to Listen to When Your Heart Has Been Broken We began collecting favorite break up songs from our friends on facebook and received an overwhelming response (I mean… who hasn’t dumped or been dumped…). Click Here to wallow in break up depression or relish an angry cathartic release.

All by Myself- Eric Carmen
Idiot Wind- Bob Dylan
Song For The Dumped- Ben Folds Five
Smoke Gets In Your Eyes- The Platters
For My Next Trick, I’ll Need A Volunteer- Warren Zevon
Friday I’m In Love- The Cure
Midnight City- M83
King of Pain- The Police
Selfless, Cold and Composed- Ben Folds Five

There are 114 songs and you better believe Alanis Morissette and Barenaked Ladies are on there.

If you have favorite (or not so favorite) break up song’s that you’d like to be added to the playlist, Click Here! People sure don’t like sharing their break up stories when they know they’ll be published online! We invited a few CPT artists to share memorable relationship blunders with us and a few brave souls responded to the call.

“My break ups are either extremely civil or extremely heart breaking. Not much of a grey area…

With the exception of the first one:

I was a wee naive thing, and it was my first serious relationship. I would bend over backwards to make this big ignorant low-ride-truck driving (his truck seriously had “No Fat Chicks, Truck Will Scrape” etched on the back windshield) moron happy, with stars in my eyes the entire time.

He cheated on me. With one of my best friends.

I was an idiot. It took me less than two weeks to forgive him and act like absolutely nothing had happened. (With full intention of writing my friend off forever, because that’s the kind of stupid I was, we’re friends to this day).

He cheated on my again. With another one of my best friends. (You’re probably thinking I needed new friends as well as a new boyfriend, but that isn’t part of this break up story).

He drops off a box on my front steps of all the pictures of us, letters, and gifts I’d ever given him. One particularly provocative picture I’d taken as a surprise for him was neatly ripped into pieces and placed in a pile in the box. And there was a picture I’d never seen before of this MORON and the scantily clad blonde chick he started dating a week after I dumped his cheating a**. (He started dating her because he just “needed to have someone to take care of”. His words not mine. Puke.)

Now it’s my turn. I, in a completely civil manner, pack up the things on my end. No picture ripping. No surprise additions. Although, I did purposely keep his NYC Monopoly set. I still have it. Suck it.

He comes to pick up the box, we meet on my front porch. A few words are said, nothing too fancy. Remember, I’m being civil. Then, we go to say goodbye and he decides to make a far too familiar move and lean in to kiss me on the mouth with his grubby hand creeping around my left hip. That would be the first time I ever full on slapped someone in the face.

He now has two illegitimate children, has gained about 30 pounds, and has a disgusting neck tattoo. I. Win.”

Here are two stories from one artist:

“1. We were freshmen in college and weren’t technically dating so much as messing around. After a few weeks of this, in the middle of a semi-clothed make out session, the topic of dating came up and the young man casually informed me that he had a girlfriend still in high school. Not an ex, a girlfriend. Which he said was totally OK because ‘she doesn’t have any idea about this, so it’s not cheating’. That put a stop to our encounters, although the young man continued to contact me for weeks, utterly baffled as to why that was a problem.

2. Towards the end of college, I grew smitten with a young man I met at a party. He had recently moved to town and we began seeing each other with increasing seriousness. Then all of a sudden one night he came over and tearfully explained that he couldn’t be in a relationship right now, there were too many problems in his life, it wasn’t fair to me, etc. I discovered THE NEXT MORNING that he’d left my house, gone to the house of another girl, and as of that morning they were ‘official’.”