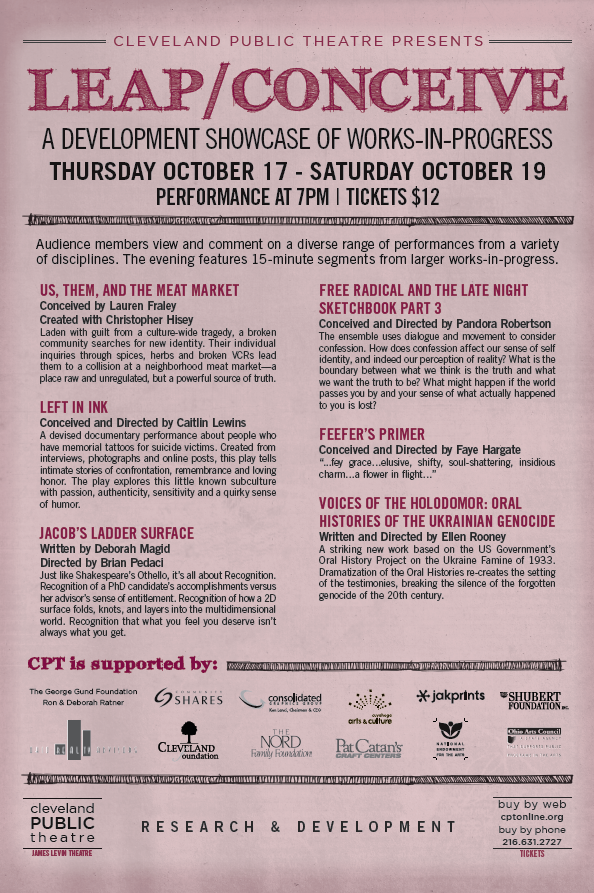 Leap/Conceive is a development series intended to support work that is at the midpoint in the creation process. This showcase includes works from a variety of disciplines and approaches, featuring 15-minute segments from larger works-in-progress. RESEARCH & DEVELOPMENT.

This Season’s Leap/Conceive line-up is: Us, Them, and The Meat Market

Conceived by Lauren Fraley
Created with Christopher Hisey
Laden with guilt from a culture-wide tragedy, a broken community searches for new identity. Their individual inquiries through spices, herbs, and broken VCRs lead them to a collision at a neighborhood meat market- a place raw and unregulated, but a powerful source of truth.

Lauren Fraley has been seen on the following CPT projects: Earth Plays (ensemble), The Secret Social in collaboration with Conni’s Avant Garde Restaurant (Etude), a Big Box production of Free Radical and The Late Night Sketchbook (Marina/ensemble), and at Pandemonium in The Reverie Oracle and the outdoor installation, Cultivated, which she co-created. She has worked as an actor-educator with CLIMB Theatre, a teaching artist at Karamu House and Children’s Theatre of Charlotte (NC), and currently at PlayhouseSquare. She has trained at LaMama Umbria in Spoleto, Italy and NaCl Theatre. She will next be performing with Theater Ninjas in Black Cat Lost, presented in various locations in Northeast Ohio. Conceived and Directed by Caitlin Lewins
A devised documentary performance about people who have memorial tattoos for suicide victims. Created from interviews, photographs, and online posts, this play tells intimate stories of confrontation, remembrance, and loving honor. Lewins brings authenticity, sensitivity, a quirky sense of humor, and passionate storytelling to this deep exploration of an entire subculture.

Caitlin Lewins is currently one of the 2013-2014 Joan Yellen Horvitz Director Fellows, as well as the Story Connecter at Cleveland Public Theatre. Ms. Lewins studied Theatre, Philosophy, and Music at Baldwin-Wallace College and graduated Magna Cum Laude in 2010. In the fall of 2012, she completed the devised directing class at CPT and made her writing/directing debut with “The Environmented” in Earth Plays (Part Two of the Elements Cycle). Ms. Lewins interned in the Education Department and Artistic Department at Cleveland Play House, as well as the Education Department at Great Lakes Theater. Ms. Lewins was previously a Grant Program Coordinator at the YMCA and organized and ran a grant funded after school program at Brooklyn Middle School that served 70 students. She’s also taught theatre, music, and visual arts at several camps including Shaker Summer Theatre, SmArt in the City and Camp Mendocino, a Boys and Girls Club Camp in Northern California.

Written by Deborah Magid
Directed by Brian Pedaci
Just like Shakespeare’s OTHELLO, it’s all about Recognition. Recognition of a PhD candidate’s accomplishments versus her advisor’s sense of entitlement. Recognition of how a 2D surface folds, knots, and layers into the multidimensional world. Recognition that what you feel you deserve isn’t always what you get.

Playwright/composer and lyricist since 2008, Deborah Magid is also a director, actor, singer, tech writer-editor, journalist, blogger, and all-round energetic type. She is attached to five Cleveland theaters including the Cleveland Play House’s Playwrights’ Unit, is a member of Dramatists’ Guild, and serves on the Board of the International Centre for Women Playwrights. Deborah’s works are not genre-identifiable as they include drama, comedy, SciFi, short, long, straight, musical, rock opera, and RICHARD WAGNER’S ENTIRE RING CYCLE IN 10 MINUTES’ a one-woman play that she performs with sock puppets.

Conceived and Directed by Pandora Robertson
The ensemble uses dialogue and movement to consider confession. How does confession affect our sense of self identity, and indeed our perception of reality? What is the boundary between what we think is the truth and what we want the truth to be? What might happen if the world passes you by and your sense of what actually happened to you is lost?

Voices of the Holodomor: Oral Histories of the Ukrainian Genocide