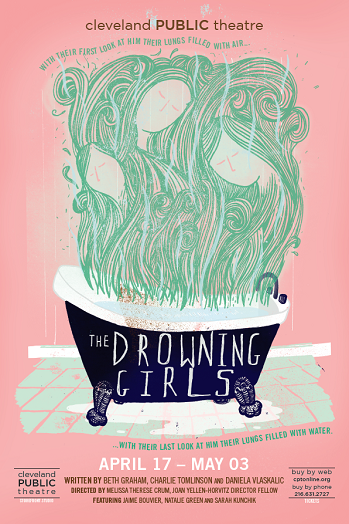 With their first look at him their lungs filled with air; their hearts began to beat. With their last look at him their lungs filled with water; their hearts would beat no more. Alice, Bessie and Margaret surface from the still waters of their bathtubs to deliver their post-mortem testimony and tell how they were wooed, wed, insured, and murdered. Based on the "Brides in the Bath" murders in England at the beginning of the 20th Century, "The Drowning Girls" is a touching and hauntingly beautiful script. In 1915, George Joseph Smith was convicted and hanged for the murder of three woman. Using different names, he would target lonely women with just enough money to make his efforts worthwhile, but not so much that they’d already found a suitor.

What makes this case remarkable is how he was caught. An newspaper article in 1914 about a newly married bride who had been found dead in her bath was enough to trigger the interest of a man who was curious about a similar occurrence a year earlier in the boarding house he owned. He sent a clipping of the article from his local newspaper to Scotland Yard and an investigation started. As stories of The Bathtub Brides started to appear in newspapers, police in Kent produced information about a third drowned wife that they felt might be related. coincidence, the lack of signs of struggle made it difficult to prove that Smith had indeed drowned the woman. Finally, one of the investigators was able to demonstrate a theory of pulling the women up by their feet– as their heads went under, the water rushing up the nose and into the mouth would render them unconscious. George Smith was brought to trial, found guilty and sentenced to hang.