This is Not the Play 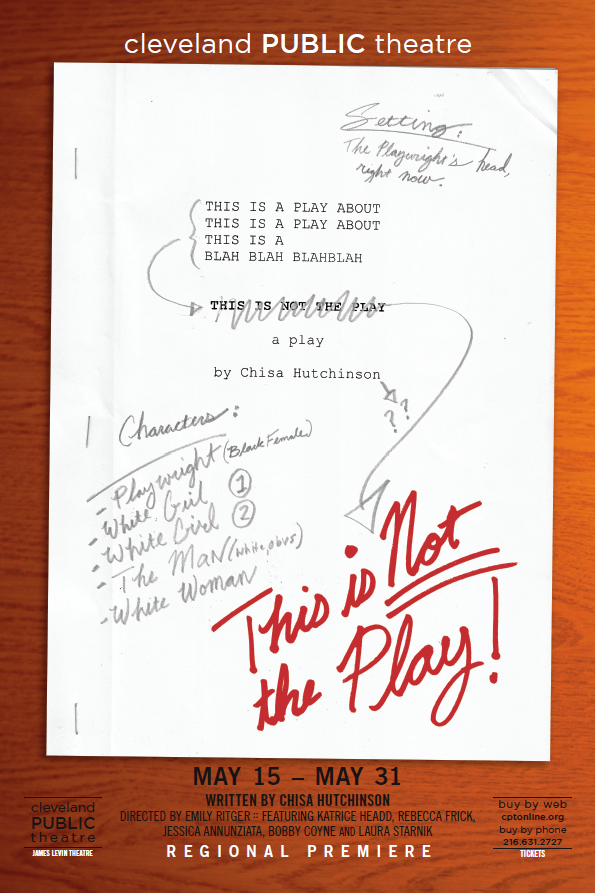 A gritty, in-your-face comedy that digs into what we naturally turn away from, racism. "This Is Not the Play" imagines a black playwright trying to write a play about white people. The problem is that the characters seem to have minds of their own. The playwright sends in her agent to interrogate the characters and then she tries to intervene as they expose their pathetically racist and patently disempowered viewpoints. Is this the playwright's reflection on racism, or on her own prejudice? SECOND US PRODUCTION. Join us for $12 Monday and Thursday performances and FREE BEER FRIDAY– mingle with the artists after the show while enjoying a FREE drink on us!

The Origins of This is Not the Play

With an incredible voice and fiery spirit, Chisa Hutchinson, playwright of This is Not the Play, says she “write[s] plays about people who don’t ordinarily get plays written about them.” Chisa explained to me that she always knew that she wanted to write something. When asked about inspiration, she said one of her favorite Radiohead songs, “Dollars and Cents” has a lyric, “be constructive with your blues”. She said, “You know? Shit happens, what are you gonna do with it? I really dig that. Make something.”

On the origins of This is Not the Play, Chisa was commissioned to write a play for Mad Dog Theatre Company (NYC) for their company of actors. She realized the entire company is white and she explains, “I started writing this play about the process of writing a play about white people, as a black person. I didn’t think anything was going to come of it really, it’s kinda dark. I tried to write it so that you never see the playwright, but by the time I got to the end of it, I was like, no, the playwright has to make an appearance. For the production I got to play the playwright, I got to play ‘myself.’ Even when you’re trying to create something different, when you’re trying to write something that isn’t you, it’s still completely you. In a weird way, you’re the reference point. We try to invent things outside of ourselves but even those are us.”

“Chisa was born in Queens, New York to young, irresponsible parents. She spent majority of her formative years under the care of a much more responsible, but chronically broke woman who was technically her godfather’s mother, but who would later- in the fine, it-takes-a-village tradition of the broken family- simply become ‘Ma.’ Chisa grew up in the company of what seemed like hundreds of unofficially adopted brothers and sisters in Newark, New Jersey, where she excelled in school and philosophized with cockroaches about the ultimate merits of poverty. Her favorite six-legged pest, who called himself Swifty on account of his uncanny ability to elude the bottom of any shoe, once told her with a wistful chuckle, ‘One day, you will be able to look back and romanticize all this shit.'” Chisa Hutchinson earned a B.A. from Vassar College and an M.F.A from NYU’s Tisch School of the Arts. Her plays, which include Dirt Rich, She Like Girls, This Is Not the Play, Sex on Sunday, Tunde’s Trumpet (a musical with puppets), The Subject, Mama’s Gonna Buy You, Somebody’s Daughter, Alondra Was Here and Dead & Breathing have been presented by such venues as the Lark Play Development Center, SummerStage, Atlantic Theater Co, Working Man’s Clothes Productions, the BE Company, Partial Comfort Productions,

Mad Dog Theater Co. and the Wild Project. In addition to having been a member playwright of New Dramatists (2013), Chisa is a Lark Fellow (2012), Dramatists Guild Fellow (2011), a resident at the William Inge Center for the Arts (2010), a New York NeoFuturist and a finalist for the highly coveted PONY Fellowship, she’s won a GLAAD Award, the John Golden Award for Excellence in Playwriting, a Lilly Award, a New York Innovative Theatre Award, the Paul Green Award and a Helen Merrill Award. Her foray into screenwriting won her Best Narrative Short at the Sonoma International Film Festival, and is looking forward to the adaptation of her play, The Subject, into a feature film.

“…the play beautifully merges the provocative with the funny and soars. Director Emily Ritger’s consistently interesting staging keeps all the action upfront and personal, and Headd and Starnik responded with some

“★★★★★ Although billed as a comedy there is a deep undercurrent of serious drama that is food for thought… See this for the laughs but stay for the thought.”
Mark Horning, examiner.com

“The format is quite inventive. Ritger choreographs the characters well within the small playing space.”
Christine Howey, SCENE