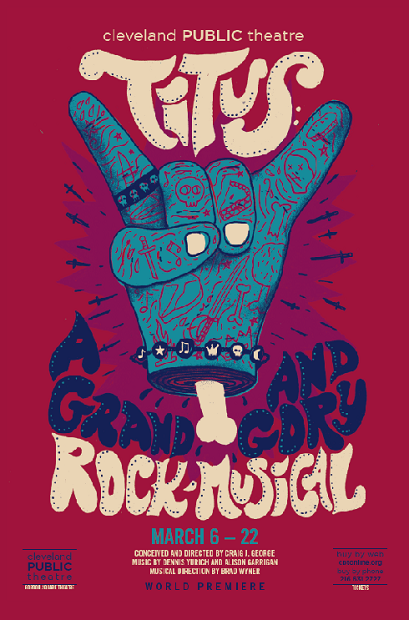 Shakespeare rolls over in his grave as his bloodiest, most horrifying script— "Titus Andronicus"— gets a total makeover as a rock musical. In this story of revenge, limbs are torn off, tongues are cut out... and everybody sings. WORLD PREMIERE. Join us for $12 Monday and Thursday performances and FREE BEER FRIDAY– mingle with the artists after the show while enjoying a FREE drink on us!

An Interview with Craig George

What is the worst experience you’ve had as an audience member at a Shakespeare performance?
Being bored. That’s easy. I can say I’ve been bored many times in productions. I recently saw Macbeth with a star studded cast and one of the most brilliant directors right now. There was surprisingly, a lack of attention to the text so it was all about atmospherics and a big overbearing set; it was very glossy, the whole thing. I couldn’t wait to get out of there. When I’m bored most in Shakespeare it’s not because of concept; it’s because the actors are not believing what they’re saying, basically. They’re not investing in it so it’s hard for me to invest in them.

Does the Bard bore?
I would say, unequivocally, no. He does not bore. It’s bad directors and actors that bore. There’s so many layers. Not only does he not bore audiences if he’s done correctly but you can be infinitely entertained and amused as an artist working on Shakespeare (which is why I’m constantly drawn back to it). I love new works and there’s a lot of very talented playwrights out there but at the end of the day, nothing can interest you on a daily basis and keep you discovering new layer after layer in a piece like a Shakespeare piece. There’s just so much that you can find and you never get bored.

What about Titus is exciting to you?
Everything. Everything about the play has always been of great interest to me. The combination of comedy and tragedy, and the plot line itself, is so bizarre, but in some ways, very relatable. These kinds of things are still happening-revenge cycles-and they were happening back then, almost 1500 or 2000 years ago, all the way to ancient Rome. The revenge cycle, once it gets started, just feeds itself. That is ultimately what this play is about; the origins of violence. And yet, the way it’s written-but not often performed-is an entertaining play. There is comedy that Shakespeare intentionally wrote into it; bad puns, word play used in bad taste. We’re embracing that quality from the very first moments of the play. I think people are going to be laughing and know that this is something to be enjoyed.

Design concept?
I’d say Roman Antiquity mashed up with a rock concert. Those kind of two distant worlds smashed together. But we’ve also incorporated this Romanesque kind of architecture that’s crumbling and revealing beneath it rusted metal beams, corrugated metal. Kind of ancient Rome mashed up with Rust-Belt Chic.

How did this whole project come about?
I’ve been kind of badgering Raymond about doing another Shakespeare, and I think this play in particular really caught his attention. It’s been at the top of my list for a while and finally it felt like the right time. I think, I can’t remember, it must have been Raymond who suggested turning it into a musical.

What will people who loved M4M love in Titus?
We do have one cross dressing character. And there was lot of that happening in M4M. We do have a lot of actors playing multiple roles, constantly changing hats in the blink of an eye. Even though we have a cast of 12, it’s still not big enough; there’s a lot of characters. We also had this kind of raucous house music for M4M that would happen in scene shifts or in a scene. Combining again the old and the new, mashing it up.

Quotes/inspiration/superstitions?
I saw a quote the day I was about to open a new musical which had pieces that were not fitting together. I was feeling a little frustrated that I didn’t have more time to work on it; that I couldn’t grab it and hold it and shape it more and this quote really kind of struck home. It was, “if you try to control your play or your story, it will only stay as big as you. But if you let it be bigger than who you are and live in that, then it’ll go to places you never imagined”. That’s a really bad paraphrasing of it but the idea is that you need to be open to where the story might take you and don’t try to control it so tightly. See what people are bringing into the room, see what inspires you in the room and be open to it all.

Tell me about the blood.
We’re embracing the gore and the guts and the blood. I made a choice very early on, and Raymond and I talked about this, that it would be gory. And we put it in the title so we’re going to go for it! I believe firmly the way we’re performing Titus is how Shakespeare intended it to be. (And that’s minus the music) but Shakespeare had a lot of music in his plays, and so I don’t think that he would object to this approach. I believe, firmly, we are capturing the spirit of the way the play was originally written; which was to be entertaining and bloody and funny and tragic, all those things.People can expect to enjoy the music and to have a very clear story told. They can expect interesting colorful characters and a lot of blood. A lot of blood. It will be gruesome but also fun, in that slasher-film kind of way. They can expect to laugh.It’s a deadly serious story, but it’s fun, too.

Anything else?
I would encourage people not to be afraid of the language. I think that when acted properly, and it will be in this production, it’s all illuminated for you. You don’t have to come with any pre-knowledge or have studied the story or the text and not to be afraid of weird words. Once you let go of this idea that you have to let go of every single word, you can really enjoy it more. And watch and listen for intonations and emotions rather than try to intellectually say, “well, now what does ‘sith’ mean?” Your brain will figure it out if you just let it. If you relax into it. Did I tell you the story of the six hour Russian piece that I saw which kind of really drove that point home to me like never before? Epic story about a family, six hours long, all in Russian, it came to the United States. They had ear pieces so you could have a translation in your ear while they’re speaking. So you know of course I’m like, “this is in Russian, I’m going to put the thing in!” I’m listening and the acting was so amazing and so clear that after about 20 minutes I just took it out. I didn’t need it. You understood what they were saying even though it was a foreign language. And Shakespeare’s not that extreme in terms of some of the language but it does seem foreign when you first hear it. You don’t have to understand every word. You just have to let go and just soak up what the actors are giving you.

52 Famous Actors who took on Shakespeare