Week #2: Unintended Consequences and Into Pieces 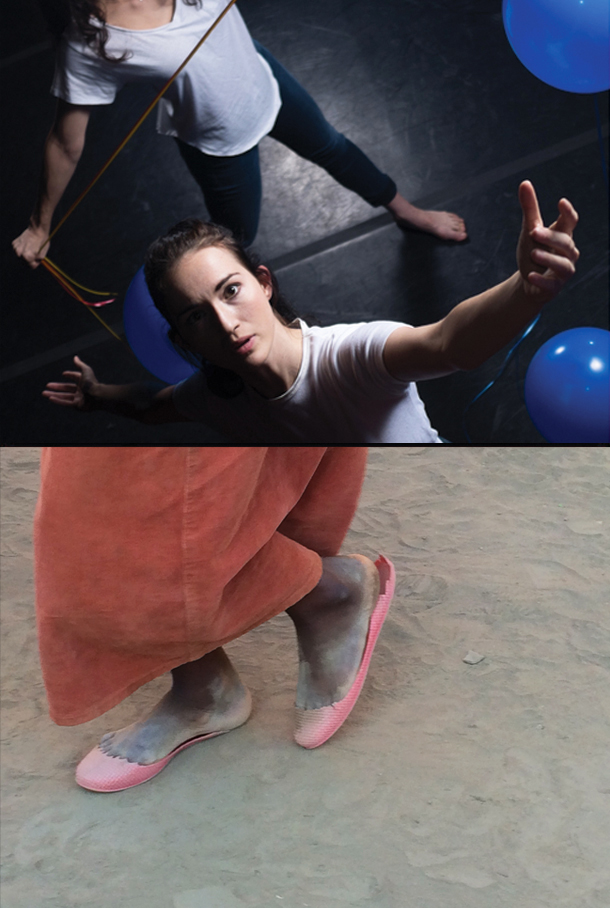 A dance exploration of daily life, vulnerability and the act of noticing, driven by research of Chaos Theory and “The Law of Unintended Consequences.” Five dancers embark on a journey to illuminate the invisible world surrounding them, highlighting how their actions and decisions influence others.

Erin Craig grew up in Ohio, studying ballet under Cassandra Macino. While earning her B.A. in mathematics from New College of Florida, she studied at the San Francisco Conservatory of Dance under Summer Lee Rhatigan, where she worked with Alex Ketley and Christian Burns, and she practiced William Forsythe’s improvisational technologies and Ohad Naharin’s movement language, Gaga. Erin has performed professionally with Fuzion Dance Artists and Urbanity Dance Project, and she has shared her own work at the Boston Contemporary Dance Festival. Erin teaches at Barre Pose Studio, manages educational software technologies at Wolfram Research, and is an associate director and dancer with The Movement Project in Cleveland, Ohio.

Falon Baltzell, a native Mississippian, is a dance artist who enjoys the challenge of minimalistic design and movement limitations. Baltzell is the recipient of a 2014 Teacher Fellowship at Bates Dance Festival. She has also been honored with a 2013 Graduate Assistant Fellowship and five consecutive summer-study scholarship for the Bill Evans Teachers’ Intensive. Baltzell has studied with Bill Evans, Maura Keefe, Karl Rogers, David Dorfman, and former Trisha Brown dancer Mariah Maloney, among others. She has performed for James Hansen Assemblage Dance, Bill Evans Company, The Movement Project, and her own work in FB Dance. Baltzell is a certified Evans Teacher, holds a K-12 Teacher Licensure, received her BFA in Dance Education and MFA in Performance and Choreography. She has taught choreography and modern dance technique during American College Dance Festivals at Penn State and Hofstra University. Baltzell has presented scholarly research in Mississippi and Western NY, including recent research: Theoretical Negotiations: Spatial Landscape as an Elaborate Illusion or Distilled Vision. Baltzell currently divides her time as the artistic director of FB Dance, and the Director of Upper School Dance at Hathaway Brown School where she designs curriculum, develops projects for community outreach, and educates high school students in modern dance technique and choreography.

Into Pieces is a collection of dance works exploring a world falling to pieces, yet rising in the midst. Having recently returned from Malawi, Africa, Without Words Movement responds to what they saw, felt and experienced in this land of wild harsh beauty.

Both Mikaela Clark and Mackenzie Valley moved to Cleveland from out of state to train and perform with Cleveland’s renowned Inlet Dance Theatre. There they worked under artistic director Bill Wade and honed their performance, teaching and choreographic abilities. Whilst dancing with the company, Clark and Valley began their choreographic collaborations in 2008, when playful and honest improvisations resulted in the creation of “Umbrellas and Rain Catchers”. Upon the success of this premiere, they were prompted to create a second piece, this time involving the collaboration of Cleveland artists Mark Sugiuchi, Chuck Karnak, and Jeremy Allen for Ingenuity Festival in 2009. These two works led Mikaela Clark to be awarded a Cleveland Workforce Fellowship in 2010 through Cleveland Partnership for Arts and Culture. This enabled both Clark and Valley to focus their attention on researching and creating new work on an injustice very close to their hearts: the global sex trade. Traveling to Thailand and Cambodia, they performed for and created with dozens of at-risk children while investigating the effects of the sex trade within these countries.

Their research continued upon returning to Cleveland, thus inspiring their first evening- length work. Collaborating with several local artists, this work “Without Words…moving against the sex trade” was birthed, speaking on the atrocious realities of the sex trade they had witnessed throughout the year. “Without Words” premiered at Cleveland Public Theatre’s 2011 DanceWorks Series. Creating and performing this work, instead of bringing closure to the issue, only stirred something deeper within their hearts and made them even more acutely aware of the fact that more action must be taken against this atrocity. A second Cleveland Workforce Fellowship Grant was awarded to Mackenzie Valley through CPAC in 2012, for their work “Without Words”. This generous fellowship allowed Clark and Valley to shift their focus to pursue this work on a more full-time basis, thus their retirement from Inlet DanceTheatre and the birth of Without Words Movement (WWM) in 2012.

Since that time, Clark and Valley have been choreographing and performing on the topic of human slavery and more broadly, the need for justice and freedom. In October 2013, their work took them to Romania and Italy where they performed for a broad audience–from Italian theaters to Romanian metro stations. They also collaborated with an anti-trafficking team in Bucharest, activating the youth in Romania to use their own voice in dance. 2014 brought more local performances in Cleveland and NE Ohio, often in non-traditional spaces, such as a collaboration with HEDGE Gallery to present an evening of new work entitled “Then Comes Life”. During this year, Clark and Valley also embarked on several collaborations with the Cleveland-based arts and compassion organization, Ancient Path (AP). In July 2014, Ancient Path and WWM partnered to direct the arts portion for “Camp Heroes”, a camp put on by Cornerstone of Hope for grieving children in their community. Over the course of the week they worked with the kids to create a production in which they boldly sang, drummed, acted and danced their universal story of grief for the local community. Clark and Valley’s most recent collaboration with Ancient Path took them to Malawi, Africa, where AP provides basic life necessities, along with tutoring, play and training in the arts, to 200 children in the impoverished township of Kalieka. During their time in Malawi, Clark and Valley worked with the dance group within the AP program, creating a new dance on them that they proudly performed for the entire township at the end of two weeks. Clark and Valley also performed in different townships and villages, often on red dirt and dodging rocks or glass shards or tent poles. Each new experience brings greater depth of understanding of the human struggle, Divine Nature, and the universal ache for freedom. Clark and Valley continue to pursue creating, inspired by life and these experiences, work that reclaims freedom through dance.