Week #4: Orphan Kiss (Left) and Turning Toward the Other 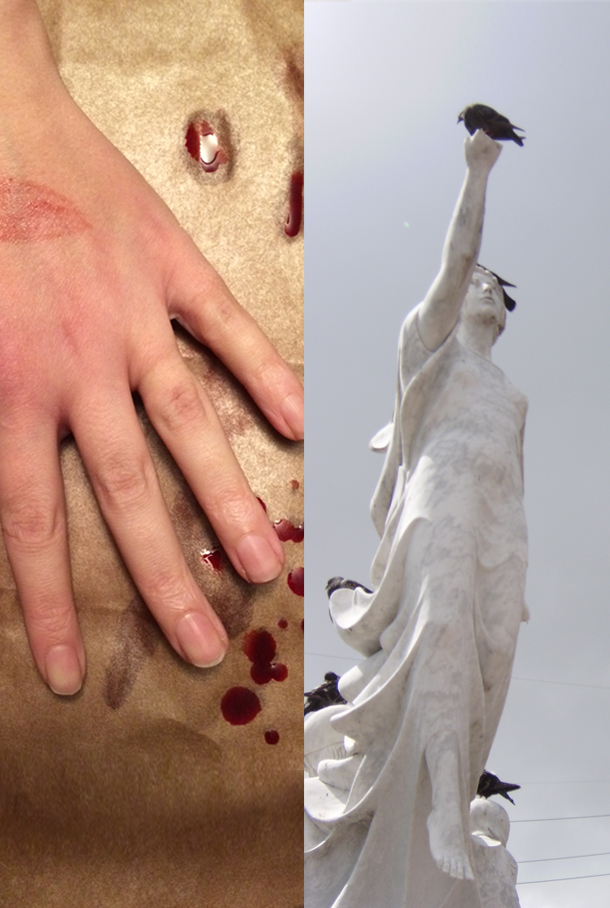 What happens to love in a world beyond feeling? In this love story from the gut, five people—stuck with themselves, by themselves, to themselves—search for connection and await the ultimate endgame. Where there is no hope, there is no home.

Jeff Glover is a local writer and actor. His work has appeared at CPT previously as part of the Big Box Series: Claus for a Moment, Jeff’s one-man take on the Santa Claus legend, and She Cried at the Circus, a modern day horror story as seen through the eyes of a peculiarly gifted woman. As a performer, Jeff was most recently seen in August: Osage County at Lakeland Civic Theatre and Next Fall at Blank Canvas Theatre.

Dale Heinen is an award-winning director and dramaturg who lived in London from 2000 – 2014. Now based in Cleveland, Dale is a Teaching Artist for the Cleveland Play House and an adjunct at Lake Erie College. Earlier in her career she lived in Chicago, where she was the Artistic Director of an off-Loop equity theatre, and then in Dublin, Ireland, where she worked as assistant director to Sir Alan Stanford at the Gate. A former Associate at Soho Theatre in London’s West End, Dale develops plays on a freelance basis with writers and producers in the UK/US, and has been a frequent panelist for playwriting awards such as the Verity Bargate Award (London) and the Oxford University New Play Festival. She has directed new work in Chicago, Cleveland, New York, London and Glasgow, and has also taught playwriting and acting at universities in London and Brazil. Dale has a BA from Northwestern University (Evanston, IL) and an MFA in theatre directing from Middlesex University (London, UK).

Turning Toward the Other

Truth is variable. At what point does the protagonist become the antagonist or the victim become the perpetrator? Turning Toward the Other features three original dances by choreographer Story Rhinehart that explore the shifting nature of reality, transitioning from real to surreal on topics ranging from fairy tales to abduction to war.

Story Lee Rhinehart is an artist and choreographer.  In 2000 Story graduated from Hathaway Brown School where she received the Emerging Choreographer award as well as the Strnad award for her evening length work, Sitting on the Edge of Humanity.  Story went on to major in dance at Wesleyan University.  There she worked closely with her mentor, Pedro Alejandro.  Since graduating Story has created works for The Cleveland Playhouse’s Fusion Fest, the Cleveland Arts Prize, the Ingenuity Festival, and for various events at the Cleveland Museum of Art.  Story initially came to dance from the perspective of a visual artist and poet.  Imagery and language, therefore, serve as inspiration for her work.  She lives in Ohio City with her husband and two daughters.