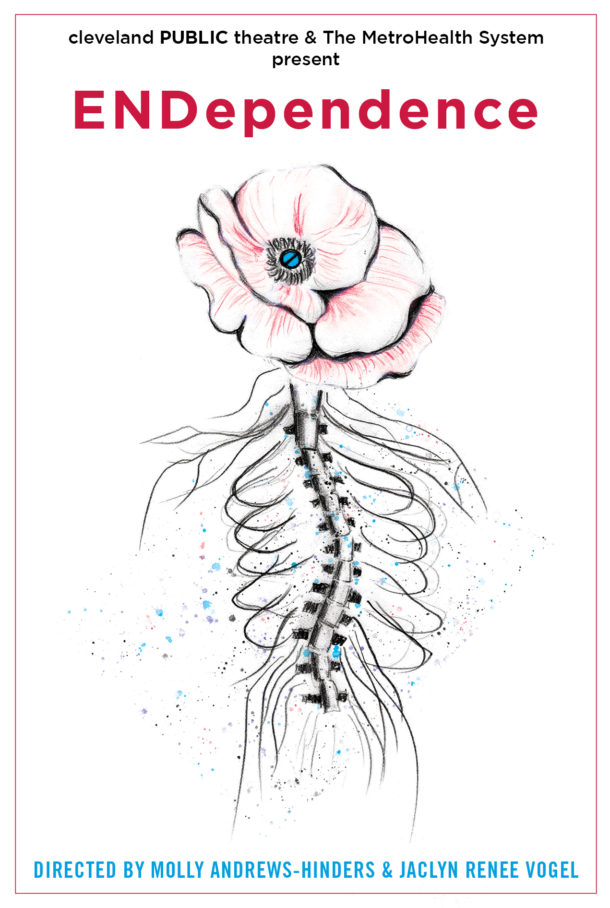 Presented by Cleveland Public Theatre and The MetroHealth System

How are we addressing the opioid epidemic now, and how do we move forward? ENDependence explores the story of pain management in this country, the kinds of treatment available for those struggling with opioid use disorder, and best methods for responding to the epidemic. Infused with both humor and gravity, and featuring songs and scenes, ENDependence highlights those in our community who are affected by opioid use disorder—from doctors to patients to family members. Interactive in form, ENDependence calls on our community to investigate how we respond on a personal and systemic level to our oldest companion: pain.

The James Levin Theatre is ADA compliant featuring a patron elevator and an all gender, wheelchair accessible restroom. If you have any accessibility concerns please contact the Box Office.

The one-weekend production at CPT will be followed by free performances in the community. See below for more information.

ENDependence contains discussions about many of the things that surround opioid use disorder. A few examples include discussions of drug use and overdose, addiction, loss, trauma, and emotions associated with personal use, or use by a loved one.

Tickets: Free. We invite donations to support this intensive project. 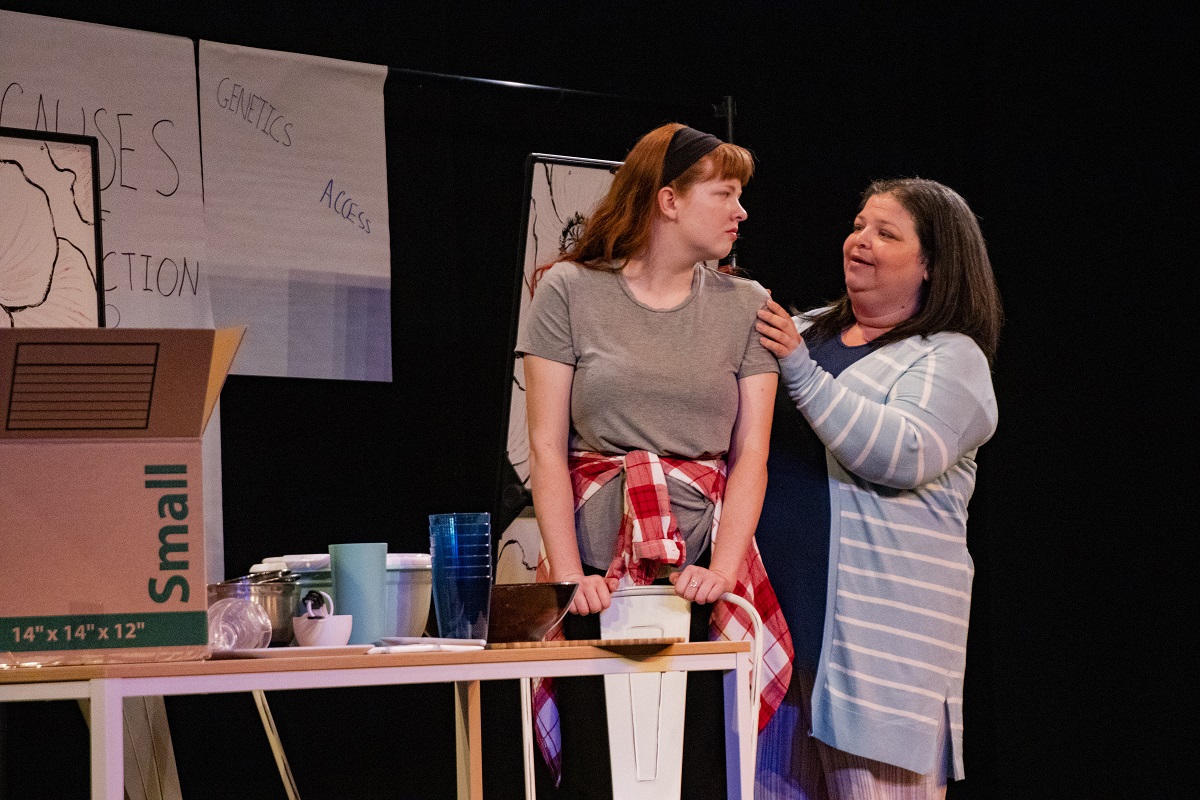 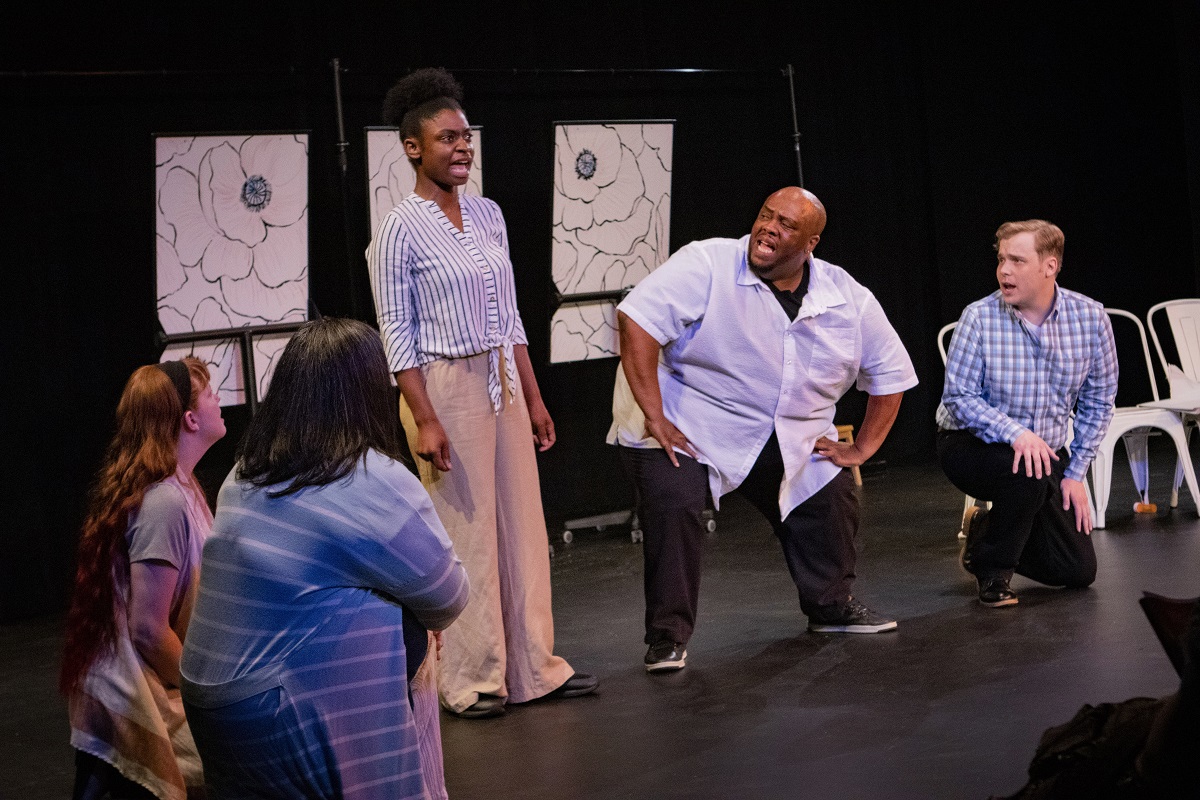 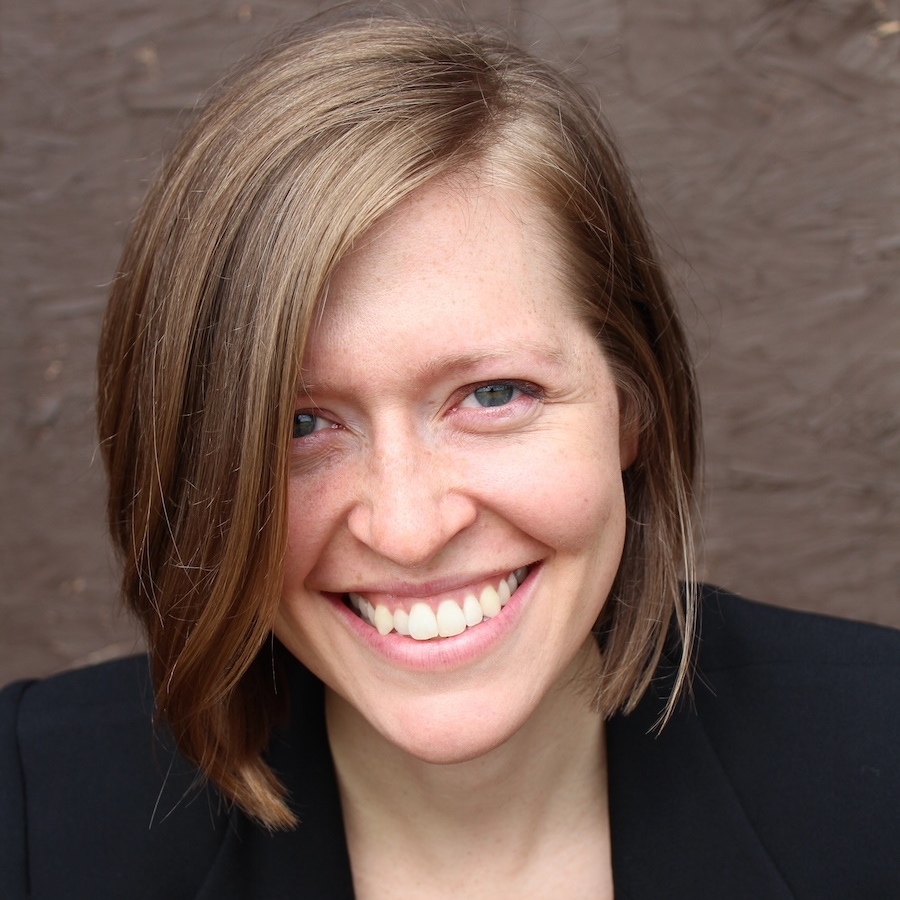 Molly Andrews-Hinders is a performer, composer, educator, and activist. She has been performing and teaching as an independent artist at CPT since 2011. She has taught in CPT’s Brick City Theatre Program, Global Teen Performance Project, and the Student Theatre Enrichment Program (STEP). Molly has also taught with the Musical Theater Project, Near West Theatre, and Talespinner Children’s Theatre. In addition to her work as a theatre educator, Molly is a certified Pilates instructor and has worked at several studios in Cleveland. Molly has created many original works for CPT shows. Her original compositions were featured in Test Flight (2019), Entry Point (2018), Station Hope (2019, 2017); Light the Lights, Ol’ Moses CLE! (A Wild Holiday Romp); Air Waves (Part Three of the Elements Cycle); Earth Plays (Part Two of the Elements Cycle); When the Moon Was Green Cheese, The Cracker Maker Was King (Big Box 2013); and Soliciting for Change (Big Box 2011), as well as numerous STEP shows. As an actor, Molly has been featured in 44 Plays For 44 Presidents, Standing on Ceremony: The Gay Marriage Plays, Rusted Heart Broadcast, and Akarui. She is a proud graduate from Wright State University where she earned a BFA. 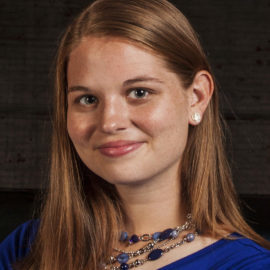 Jaclyn was a writer, performer, and artist cohort member for the ENDependence Project in January 2018. Since moving to Cleveland in 2014 from Indianapolis, CPT has been her creative home away from home, where she has acted as both a theatre artist and administrator. As a theatre creator, Jaclyn’s pieces have been performed at Pandemonium, Ohio City Street Festival, Station Hope, Entry Point, and Test Flight. She was a Joan Yellen Horvitz Assistant Directing Fellow in CPT’s 2014/2015 Season, and her assistant directing credits include: Fire on the Water (Part Four of the Elements Cycle) and Lines in the Dust. This season she costume designed Everything is Okay (and other helpful lies) and workshopped her play, To Be Healthy, as part of Test Flight. Jaclyn holds a Bachelor’s degree with high honors in Theatre from Butler University and is currently CPT’s Director of Patron Services.

get to know the full team of ENDependence creators

FREE TOUR PERFORMANCES IN THE COMMUNITY

We invite donations to support this intensive project.

A partnership between MetroHealth’s Department of Arts in Medicine and Cleveland Public Theatre.

“Pain is something every human experiences—it’s part of life… How can we move forward into a place that really deals with holistic care and not just this for-profit, easy, quick-fix road?” 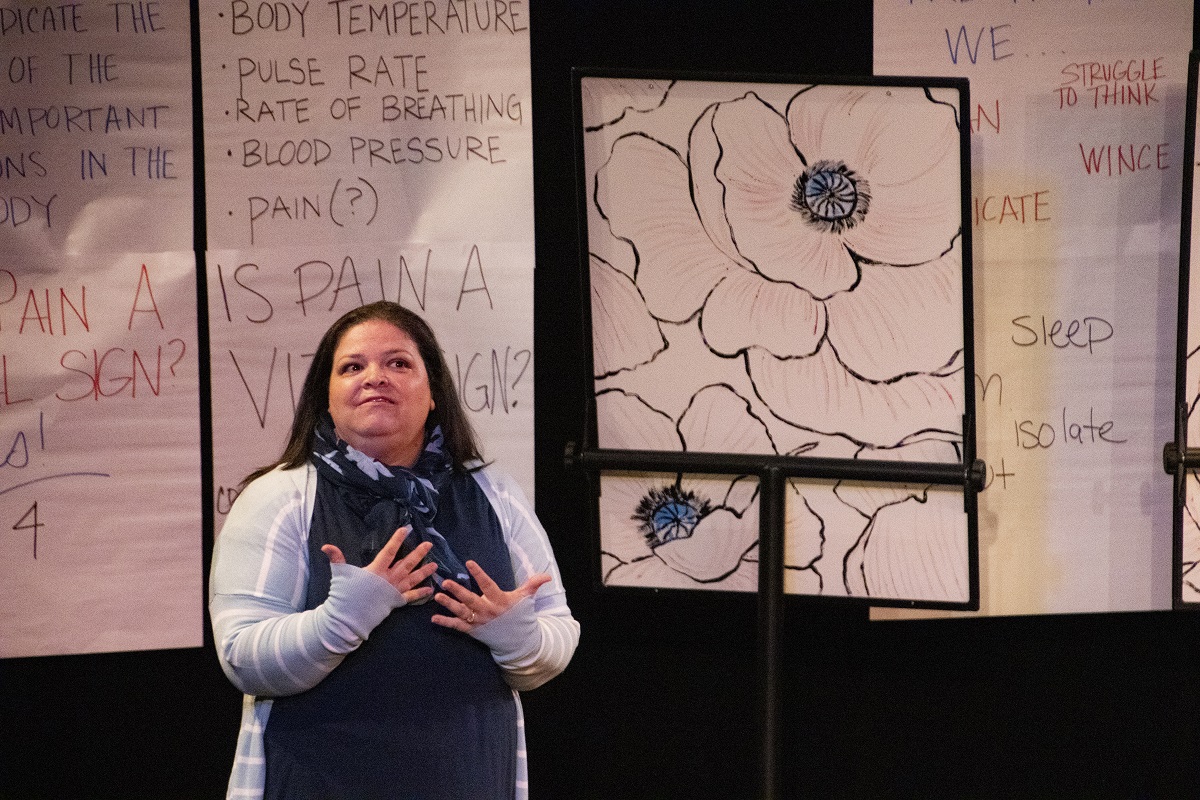 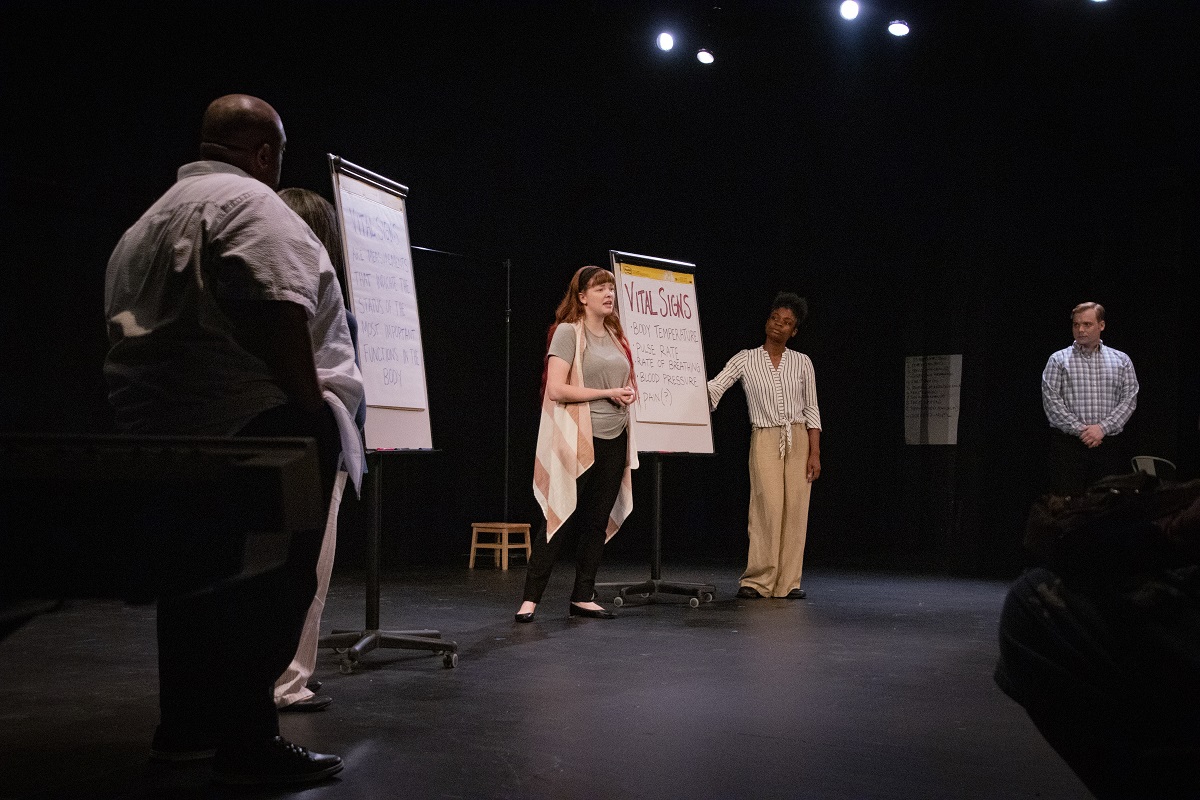 Healing through the arts: CPT’s partnership with MetroHealth 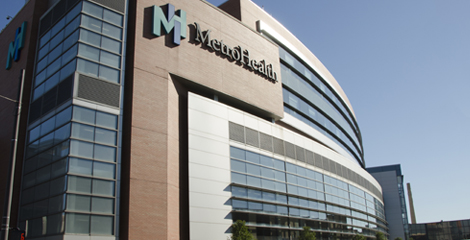 “ENDependence is a partnership with MetroHealth’s Department of Arts in Medicine. There was a lot of discussion before we even went into the project. Last year, co-creators John Dayo-Aliya, Christopher Johnston, and Jaclyn Vogel and I did deep-dive research at MetroHealth—we talked to doctors, patients, and first responders in order to get a sense of the complexity of the issue. Once we heard all of the interviews, we came together and said, ‘How can we tell a story with this?'” -Molly Andrews-Hinders

Click here to learn more about MetroHealth’s Department of Arts in Medicine.

“These performances are for everyone. This includes those affected directly by the opioid epidemic and anyone who just wants to learn more about it.” 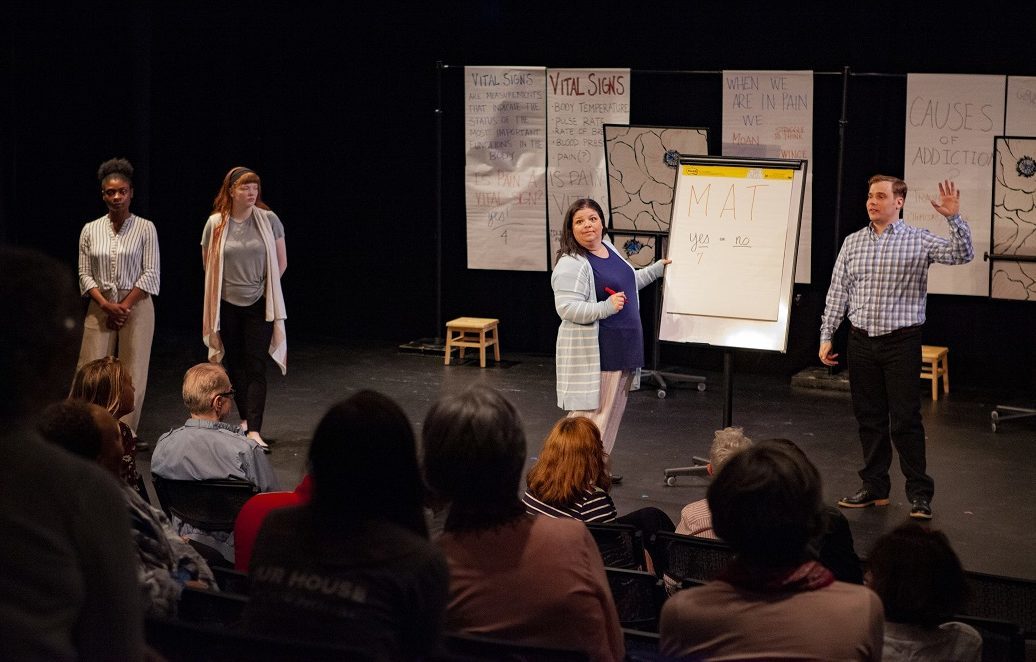 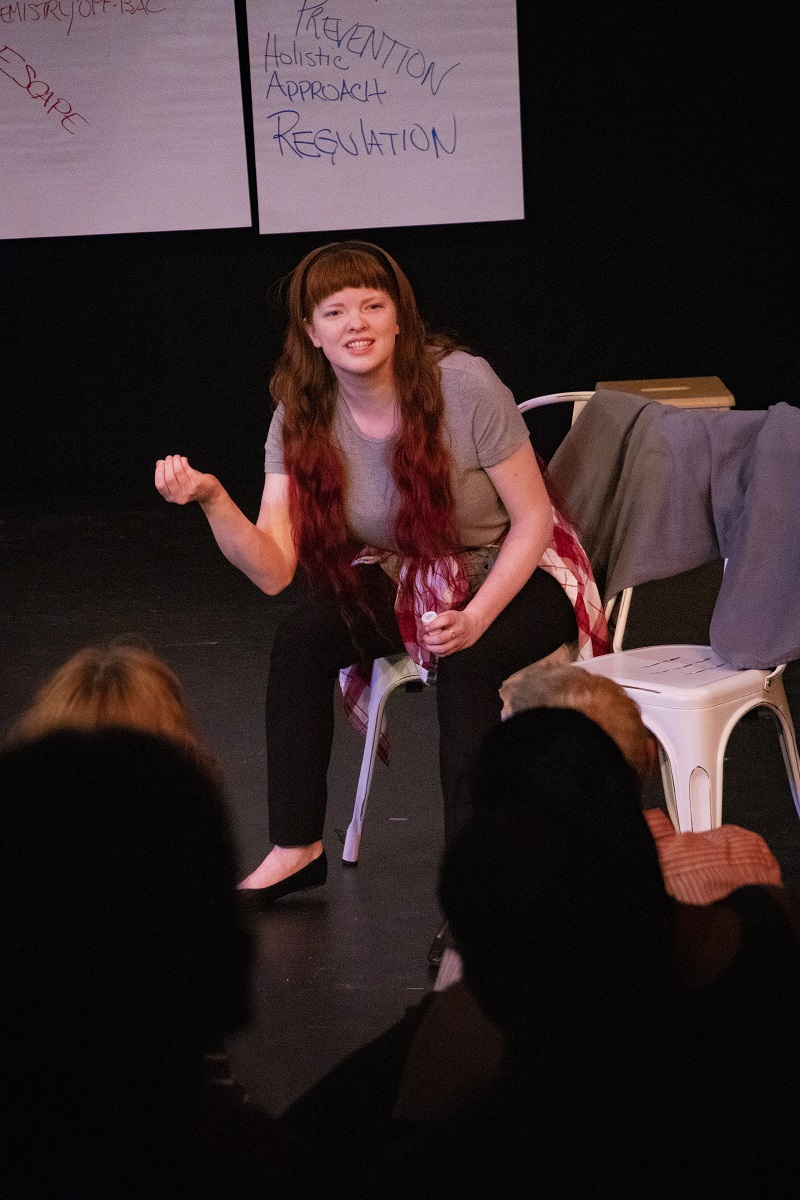 “In the late 1990s, pharmaceutical companies reassured the medical community that patients would not become addicted to prescription opioid pain relievers, and healthcare providers began to prescribe them at greater rates. This subsequently led to widespread diversion and misuse of these medications before it became clear that these medications could indeed be highly addictive.”

Click here to read more from the National Institute on Drug Abuse.

In 2017, Ohio had the second highest rate in the country of drug overdose deaths involving opioids. Click here or on the image to learn more.

“There are so many ways people are fighting this epidemic, and I believe art and ENDependence can create a safe space for needed discussion on how to move forward.” 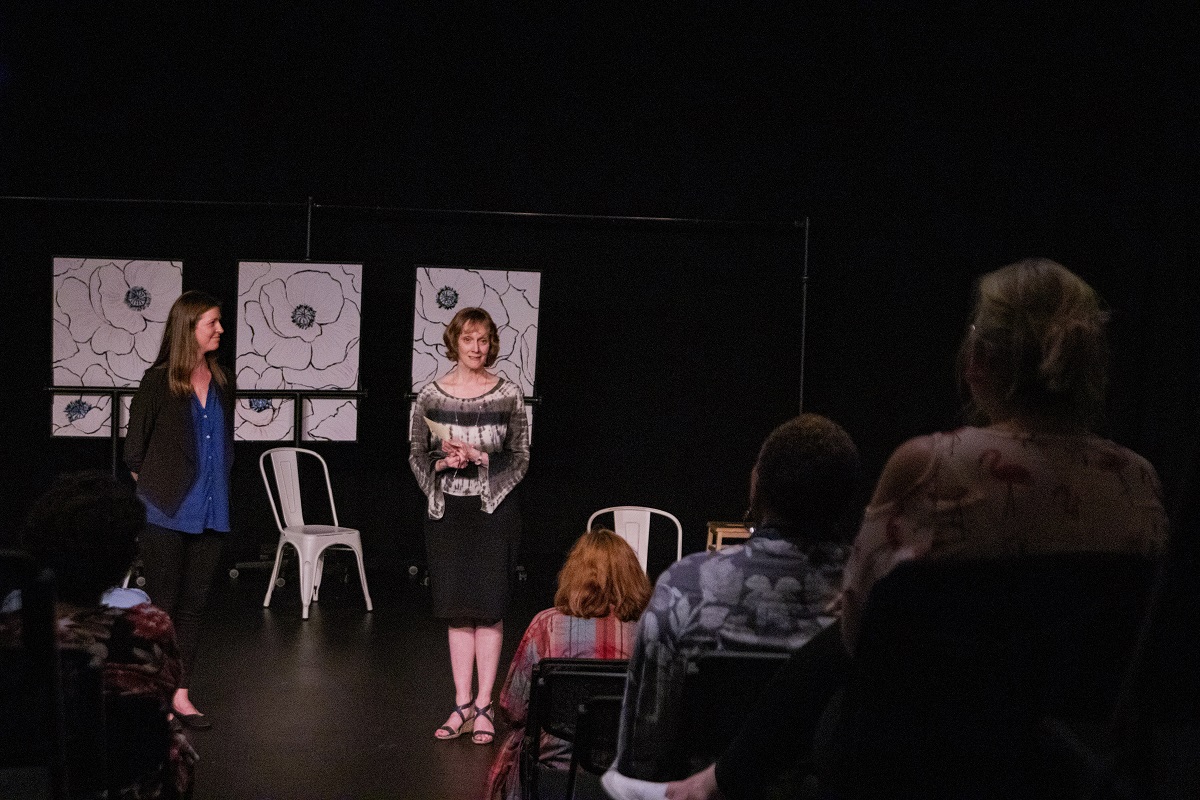 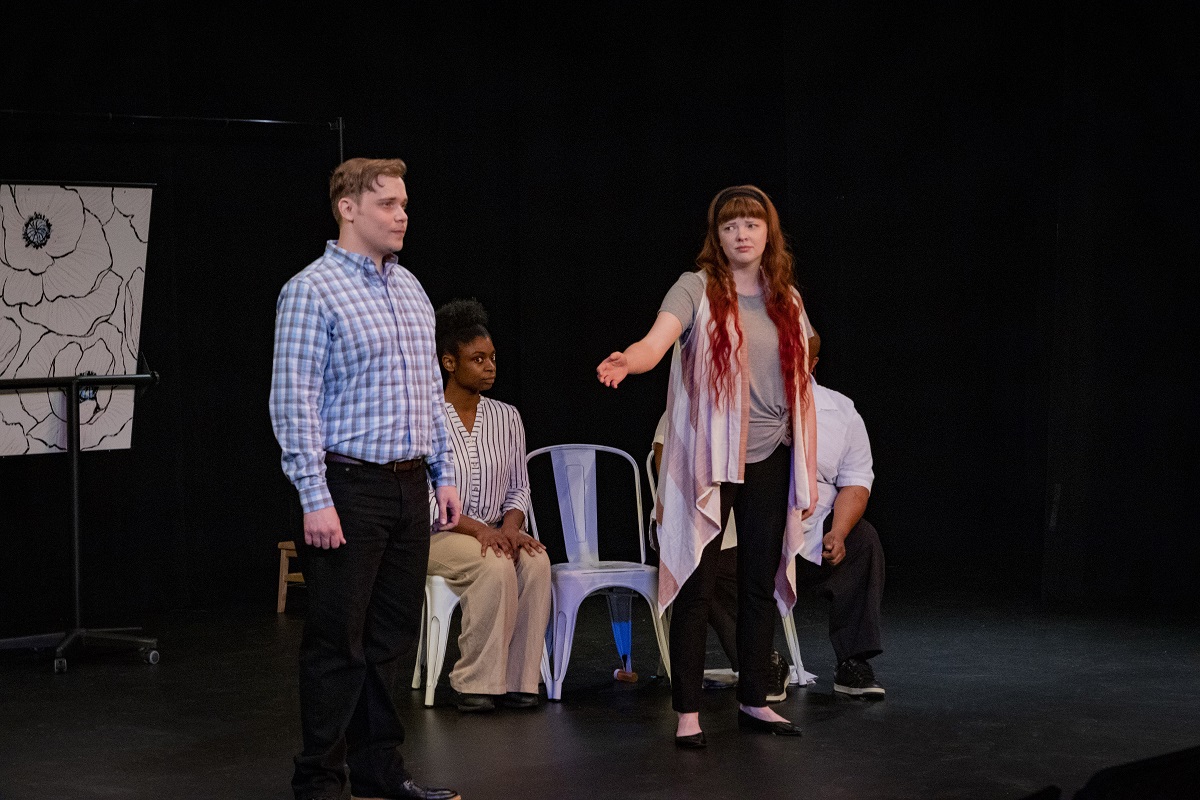 Oklahoma’s landmark trial: Can drug companies be held responsible for the opioid crisis?

“Opioids take a hold of you and it’s extremely hard for people to overcome that.” -Emily Walden, mother of TJ Walden, who died from overdosing on oxymorphone at 21

In a historic trial being held in Oklahoma, the state is accusing Johnson & Johnson of using deceptive marketing that fueled the opioid crisis. The trial will set the stage for every other opioid lawsuit across the country. Click here or on the image to watch the full report on CBS News.

About The MetroHealth System

The MetroHealth System, Cuyahoga County’s public health system, is honoring its commitment to create a healthier community by building a new hospital on its main campus in Cleveland. The building and the 25 acres of green space around it are catalyzing the revitalization of MetroHealth’s West Side neighborhood.

MetroHealth broke ground on its new hospital in 2019. The project is being financed with nearly $1 billion the system borrowed on its own credit after dramatically improving its finances. In the past five years, MetroHealth’s operating revenue has increased by 44.5 percent and its number of employees by 21 percent. Today, its staff of more than 7,900 provides care at MetroHealth’s four hospitals, four emergency departments, and more than 20 health centers and 40 additional sites throughout Cuyahoga County. In the past year, MetroHealth has served 300,000 patients at more than 1.4 million visits in its hospitals and health centers, 75 percent of whom are uninsured or covered by Medicare or Medicaid.

The health system is home to Cuyahoga County’s most experienced Level I Adult Trauma Center, verified since 1992, and Ohio’s only adult and pediatric trauma and burn center.

As an academic medical center, MetroHealth is committed to teaching and research. Each active staff physician holds a faculty appointment at Case Western Reserve University School of Medicine and its main campus hospital houses a Cleveland Metropolitan School District high school of science and health. 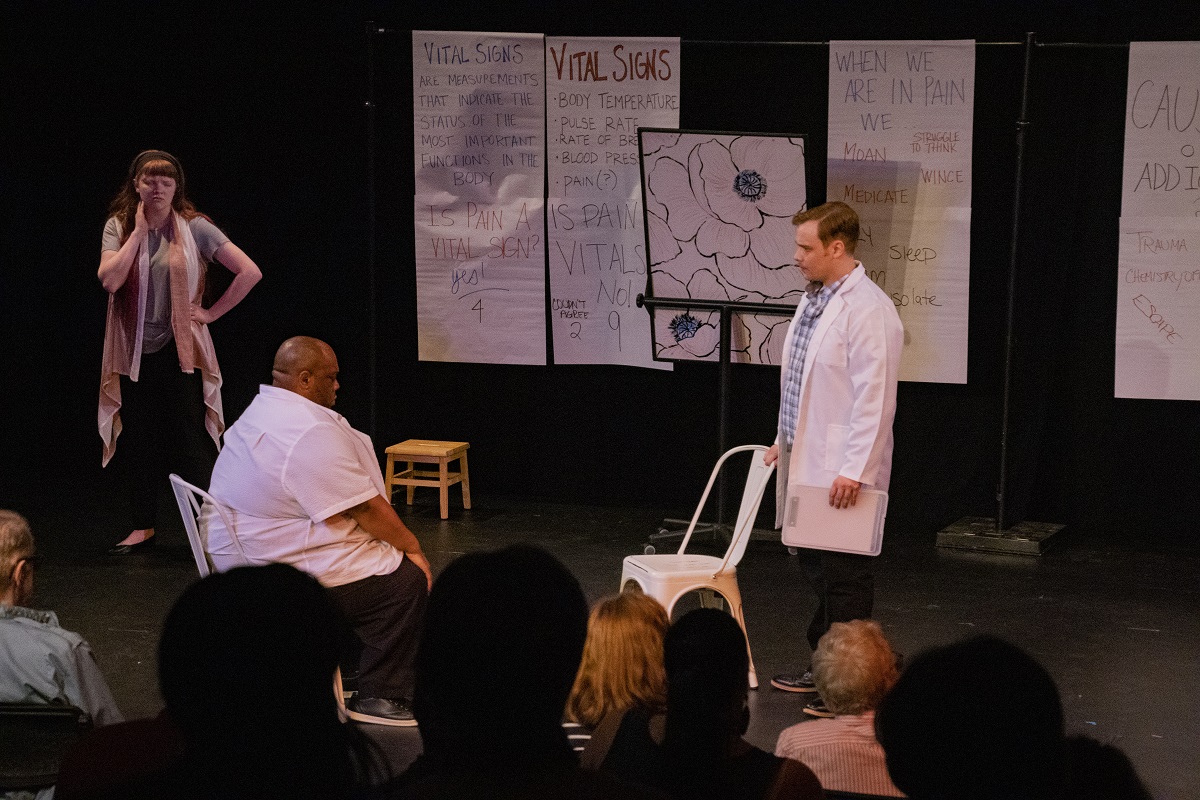 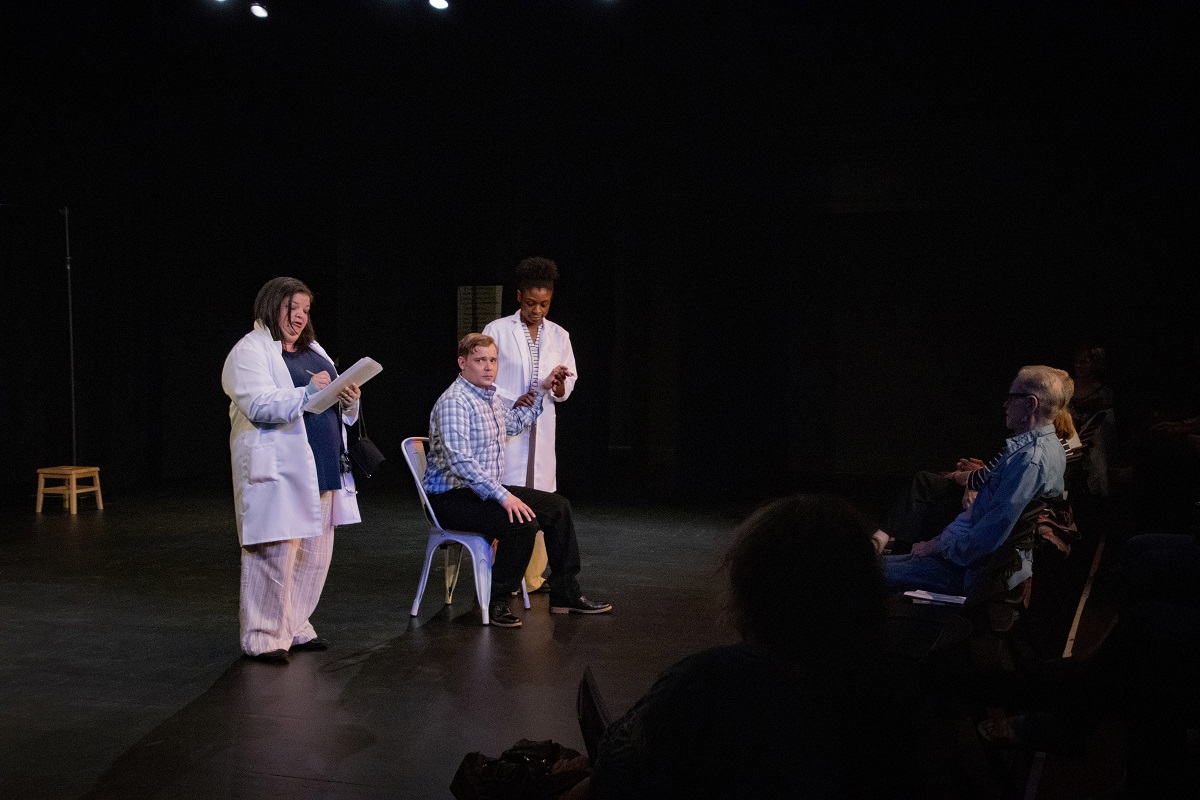 About The MetroHealth System Department of Arts in Medicine

The performing and visual arts have a positive, transformative impact on health and quality of life in and outside of MetroHealth’s walls. Patients, caregivers, and the broader community benefit from an integrated approach to the arts and health through dedicated physical space and programs.

The Arts in Medicine program at MetroHealth is dedicated to transforming health and healing through the arts. They integrate the arts in a variety of settings: in their hospital, their clinics, their health centers, and their neighborhoods. Through music, dance, theatre, visual arts, and community arts programs, artists create a truly extraordinary MetroHealth experience.

For more information about The MetroHealth System Department of Arts in Medicine, click here or watch the video below from MetroHealth.

Ohio’s first Project DAWN began in 2012 as a pilot program initiated by the Ohio Department of Health (ODH) in Scioto County. Cuyahoga County Project DAWN began on March 1, 2013 as a response to the alarming rise in opioid overdose fatalities within the county. The Ohio Department of Health reported a 413% increase in overdose death between 1999 and 2013 with nearly 3/4 of the overdose deaths in 2013 involving an opioid.

An opioid includes both prescription painkillers (Percocet, OxyContin, Oxycodone, Vicodin, Morphine, Fentanyl, etc.) and heroin. Naloxone, also known as narcan, is an opioid antagonist and the antidote to an opioid overdose. Opioid overdose causes respiratory depression and, if not treated, death. When administered during an overdose, naloxone blocks the effects of opioids on the brain and restores breathing within two to five minutes. Naloxone has been used safely by emergency medical professionals since the 1960s and has only one function: to reverse the effects of opioids on the brain and respiratory system in order to prevent death.

Naloxone has no potential for abuse and is innocuous if administered to an individual not experiencing an opioid overdose. It has no effect on other drugs such as benzodiazepines or alcohol. If naloxone is administered to a person who is dependent on opioids, it will produce withdrawal symptoms. Opioid withdrawal, although uncomfortable, is not life-threatening. Naloxone does not reverse overdoses that are caused by non-opioid drugs, such as cocaine, benzodiazepines (e.g. Xanex, Klonopin, and Valium), methamphetamines, or alcohol.

ENDependence IS MADE POSSIBLE THROUGH THE GENEROUS SUPPORT OF