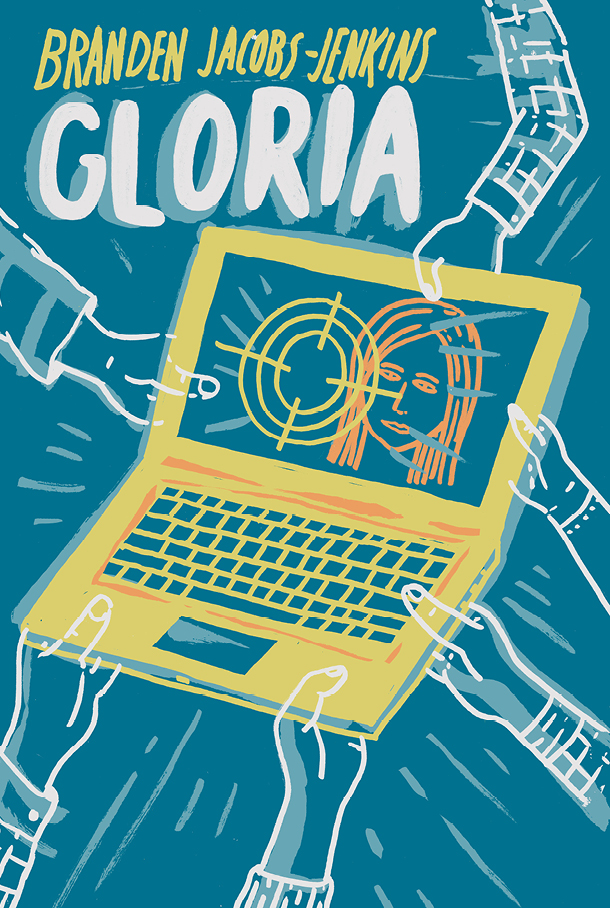 A group of bickering editorial assistants at a prestigious magazine are chasing the dream: a book deal before they turn 30 and a shot at fame when an ordinary day at the office becomes a living nightmare. The stakes for who gets the story skyrocket when crisis offers an opportunity for a career-defining moment. Inside America’s media machine, who has the right to tell whose story? Simultaneously funny and shocking, Gloria is an adrenaline rush of a show skewering the opportunistic culture of modern media.

CPT'S PRODUCTION OF GLORIA INCLUDES SUDDEN, LOUD GUNSHOTS, AND GRAPHIC VIOLENCE. FOR ADDITIONAL CONTEXT ABOUT THE PRODUCTION, WE STRONGLY ENCOURAGE YOU TO CLICK THE LINK AT THE BOTTOM OF THIS PAGE TO READ THE CONTENT WARNING. NOTE: INCLUDES SPOILERS. YOU CAN ALSO CONTACT THE BOX OFFICE WITH QUESTIONS AT 216.631.2727 x501 OR boxoffice@cptonline.org. 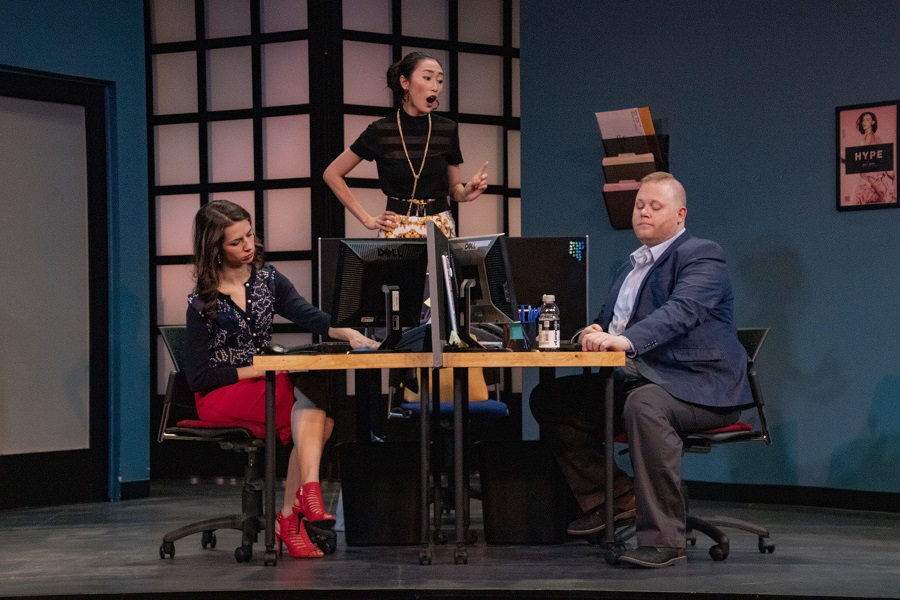 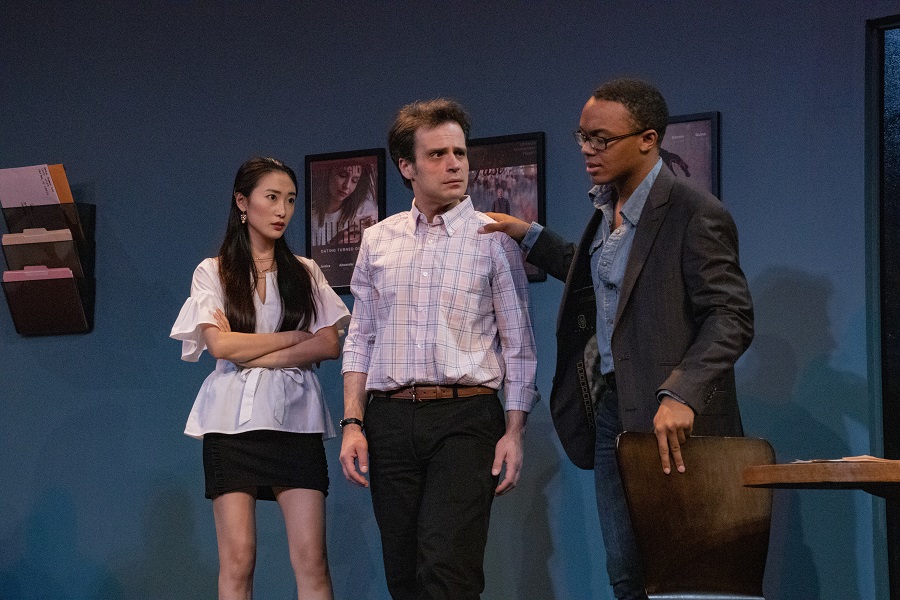 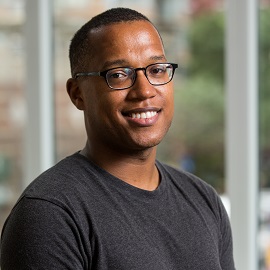 ABOUT the PLAYWRIGHT: BRANDEN JACOBS-JENKINS

ABOUT the DIRECTOR: BETH WOOD

Beth Wood joined the CPT staff in 2007. A director, actress, administrator, designer, educator, and theatre technician, she holds a BA in Communications and Theatre from John Carroll University. As a director of adventurous scripted work, she has been honored as a director of superior achievement by the Cleveland Critics Circle in 2016, 2015, and 2013, and has directed 16 productions, including seven world premieres and seven regional premieres, during her ten-year tenure at CPT. In 2017, Beth was selected as a finalist for the National Directing Fellowship. In addition to her directing work, Beth supports four New Play Development series that invest in outside-the-mainstream work and the artistic growth of Northeast Ohio creators. In 2016, she was awarded a TCG Leadership U[niversity] Continuing Ed grant to research long-term new play development models across the country. Beth also produces large-scale community events for CPT, including Station Hope – an annual community event featuring over 200 artists performing original work inspired by issues of freedom and justice at Cleveland’s first authenticated Underground Railroad site. Last February, Beth traveled to Iowa to direct the World Premiere of Apples in Winter by Jennifer Fawcett at Riverside Theatre in Iowa City. Her CPT directing credits include Lines in the Dust by Nikkole Salter, the NNPN Rolling World Premiere of in a word by Lauren Yee, There Is a Happiness That Morning Is by Mickle Maher, Barbecue and Antebellum by Robert O’Hara, FEVER/DREAM by Sheila Callaghan, Why Torture is Wrong and the People Who Love Them by Christopher Durang, and BOOM by Peter Sinn Nachtrieb. In addition to her work with scripted productions, Beth co-creates and directs original plays based on a comedic singing duo, The Loush Sisters, for Playhouse Square in 2011 and CPT in 2013, 2015, and 2017. Beth’s CPT acting credits include Hedwig and the Angry Inch, Mrs. Bob Cratchet’s Wild Christmas Binge, A Bright Room Called Day, Fefu and Her Friends, The Rocky Horror Show, Our Town, Pulp, Matt & Ben, Anna Bella Eema (co-production with Theater Ninjas, now Maelstrom Collaborative Arts), Open Mind Firmament, Don’t Call Me Fat, Akarui, Standing on Ceremony: The Gay Marriage Plays, Earth Plays (Part Two of the Elements Cycle), The Loush Sisters DO the Nutcracker, The Loush Sisters Love Dick’ns: Great Expectations, The Loush Sisters get HARD for the Holidays (Yippie-Kai-Yay Mother-Loushers), and Mr. Burns, a Post-Electric Play. A former Actor-Teacher for Great Lakes Theater, Beth has taught a variety of theatre and acting courses throughout Northeast Ohio, and has served as the Technical Director for John Carroll University, Lakeland Theatre, and Stagecrafters. 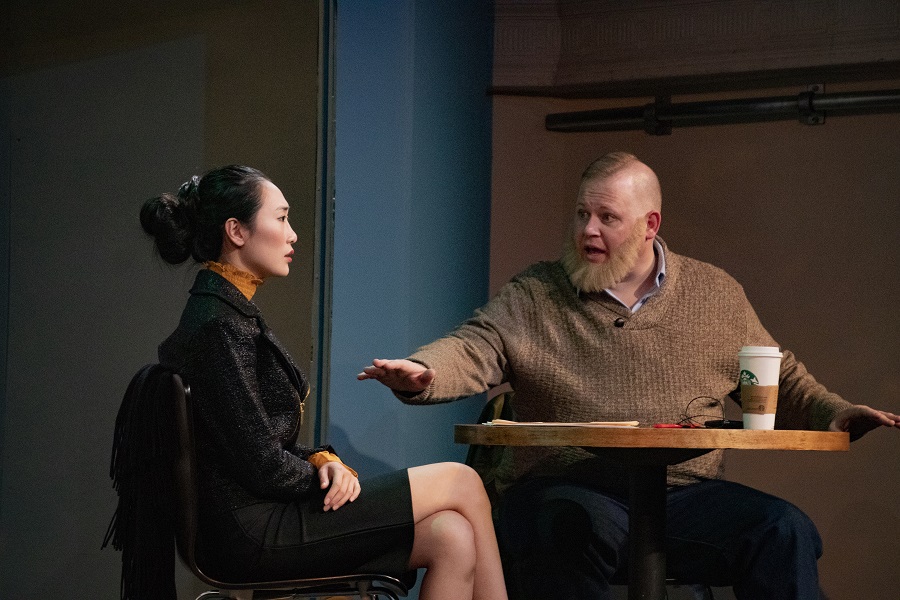 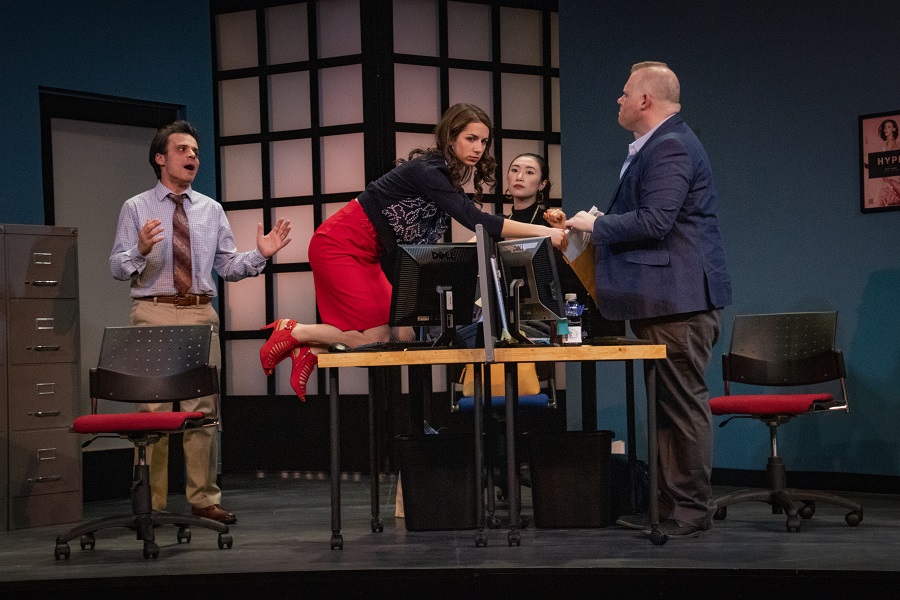 A Message from CPT Staff

“Gloria is a biting, and beautiful play that’s simultaneously hilarious and eerily reflective of disturbing contemporary practices. Inside Gloria, we consider questions like, ‘Why are cultures that focus on productivity, ambition, and self-service dominating our work and personal lives? When toxicity is so prevalent, how do we truly invest in those around us? How do we create empathy, build community, and connect with each other?’ Gloria is also about agency and ownership of experiences and stories. Who can tell and sell whose story?” -Raymond Bobgan, CPT Executive Artistic Director

Gloria follows an ambitious (and squabbling) group of editorial assistants at a prestigious Manhattan magazine whose ordinary workday suddenly becomes a living nightmare. The story begins as a sharp satire of toxic work environments and transforms into an exploration of authorship and who has ownership of the story.

Gloria is both laugh-out-loud funny and devastating, digging into the depths of humanity in unexpected ways. In an interview, Playwright Branden Jacobs-Jenkins said, “Plays are about the people who show up together.”

We hope you’ll join us.

“When you’re striving to be your best, what masks do you wear and how does that change you to the core? How much of yourself will you sacrifice to get ahead? Gloria explores the deep repercussions of ambition.” 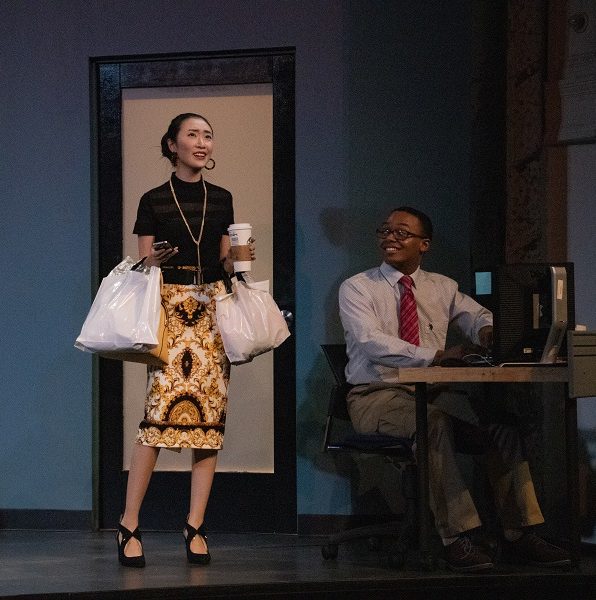 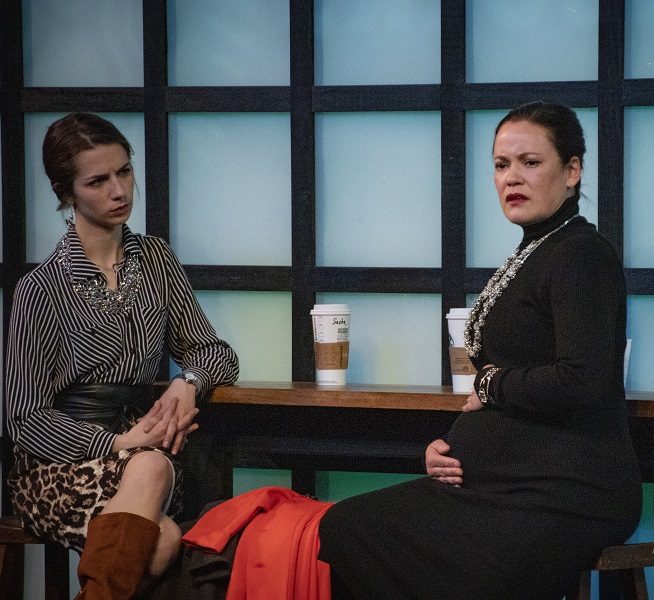 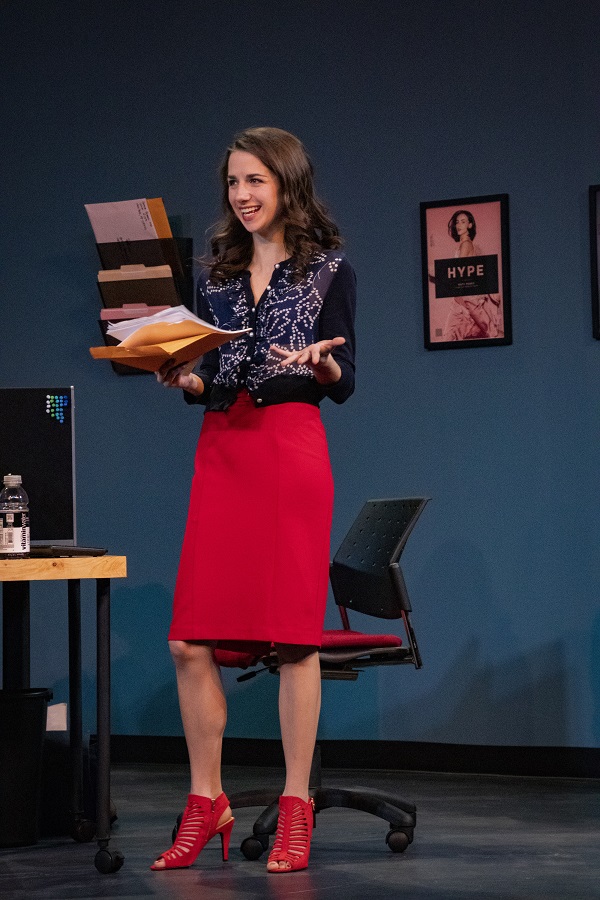 Branden Jacobs-Jenkins is a brilliant playwright. Gloria is hilarious—and then not so funny at the same time. This balance, or this juxtaposition, awakens something inside of you. I’ve been a fan of Branden Jacobs-Jenkins’ work for years (An Octoroon, Neighbors, Appropriate, War, Everybody), and I’m thrilled to have the opportunity to tackle one of his plays… and this play is incredible! Gloria is a sharp-toothed comic drama that starts off in the drudgery of working in a soul-sucking office environment. But after a tragedy, this play becomes a story about authorship and identity. Gloria is funny, shocking, and transformative.

“One of the most incredible and important things about theatre, and all art really, is that we’re creating a safe space for all feelings, but especially ugly feelings. I think we can’t deny that we are human beings who feel fear, who feel disgust, and I think that the theatre’s supposed to be the space to rehearse those feelings. Feel yourself feeling those feelings, and then make peace with them and understand what they’re about… all I want is for people to leave [the theatre] with something to mull over. And leave with the bravery to actually try to connect, try to understand, to see each other in each other.”

“The way Branden Jacobs-Jenkins uses storytelling to dig in and ask questions of our society, and call society out, is really brilliant, powerful, and palpable.” 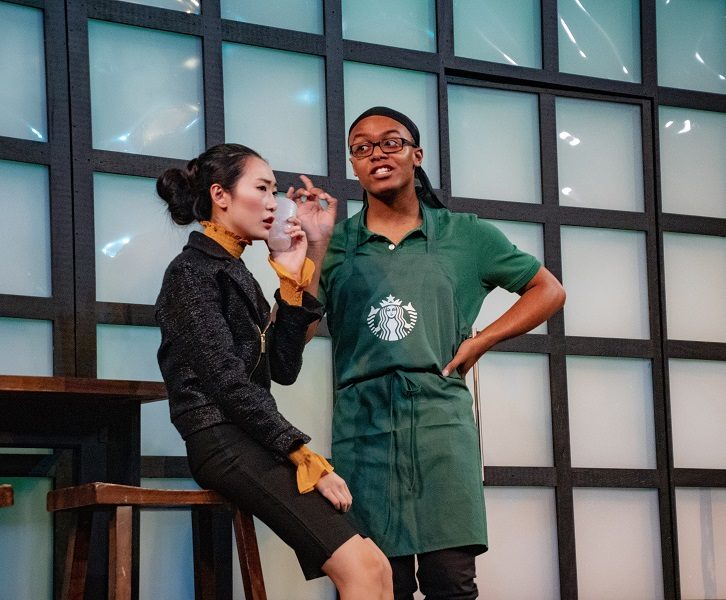 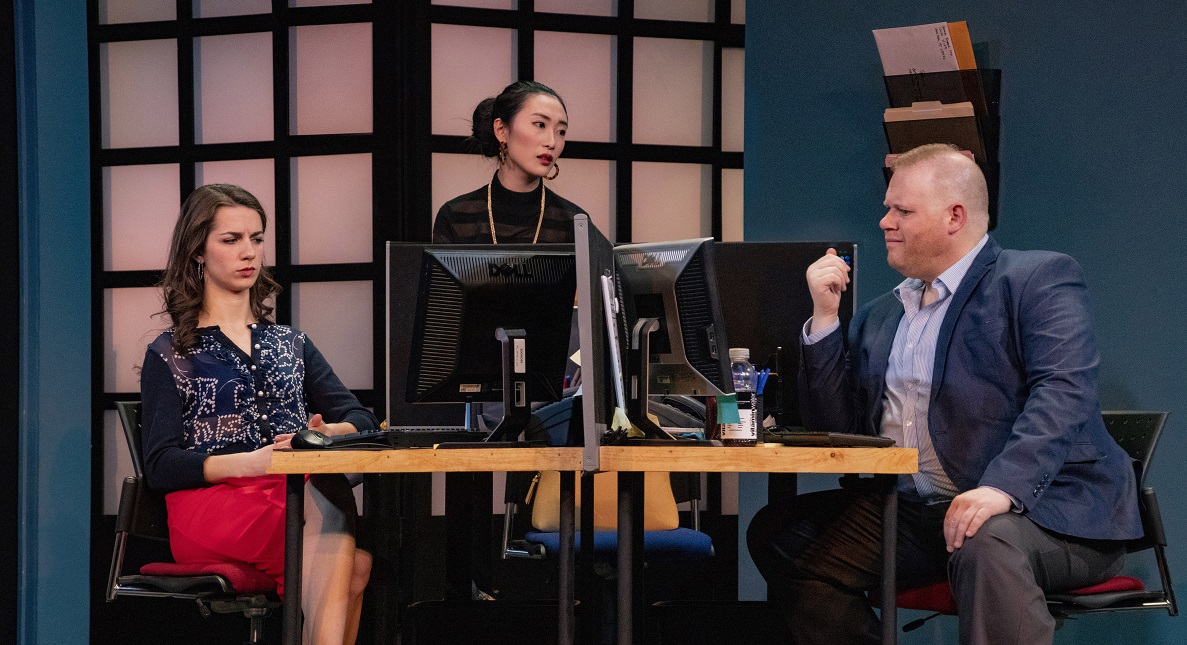 “I was interested in the ways that [ambition] affects the compromises you make with yourself and your morals. I was also interested in what a writer’s ambition is, because I was writing about a group of people whose job is to basically transcribe life and experience and decide what’s newsworthy or not newsworthy, what lives have value or not, determined by what happens in them.”

Just before Gloria had its World Premiere at NYC’s Vineyard Theatre in 2015, Branden sat down with Miriam Weiner, Vineyard Theatre Literary Associate, to discuss the play. Click here or on the image to read the full interview.

An interview with Branden Jacobs-Jenkins

“His multifaceted plays ricochet between genres and from hilarity to heartache.” -Eliza Bent, American Theatre magazine

“I find that when I see one thing, Branden sees 10 things. His work represents the struggle to show an audience how these 10 things are all indelibly connected.” -Alex Barron, Dramaturg & Literary Manager

Click here to read further and then scroll down for an in-depth (and frequently hilarious) interview with Gloria Playwright Branden Jacobs-Jenkins conducted by Eliza Bent in American Theatre magazine.

Confronting race and identity in the U.S.

Branden Jacobs-Jenkins is known for pushing boundaries with provocative plays that confront race and identity in America. Click here or on the button below to hear more in an interview with Branden on All Things Considered. 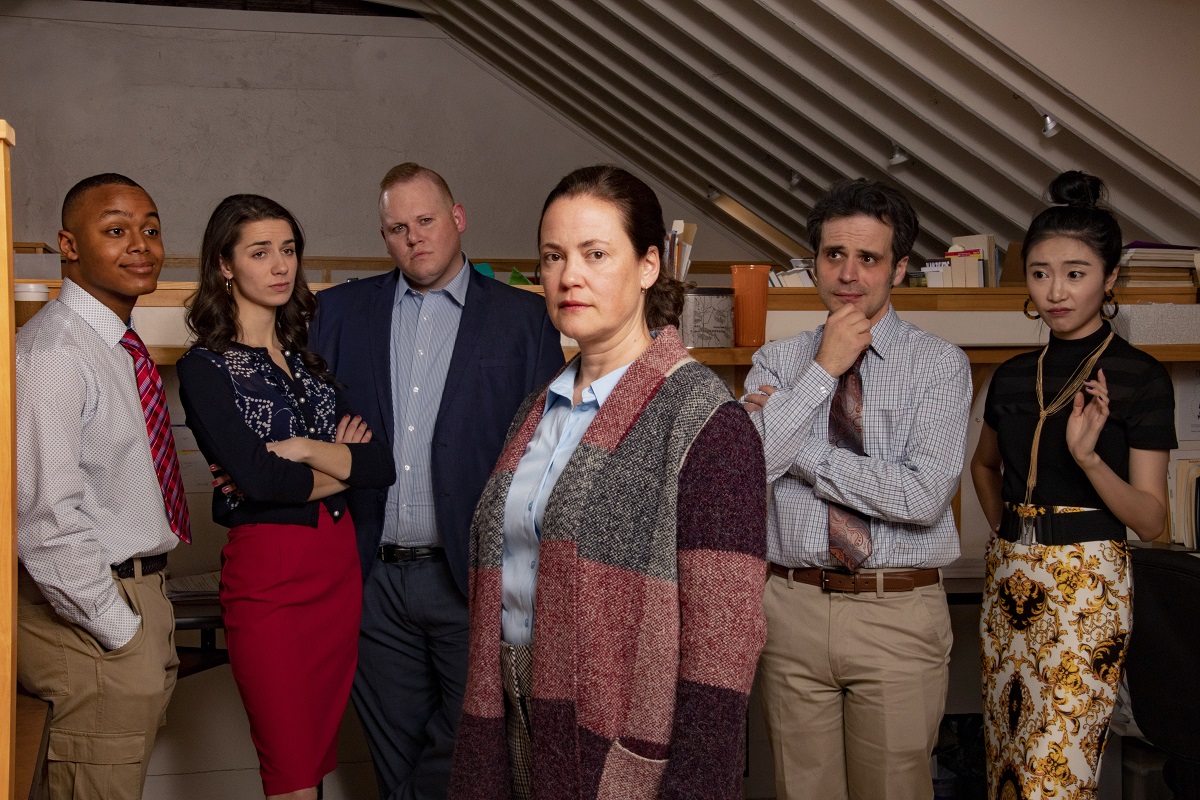 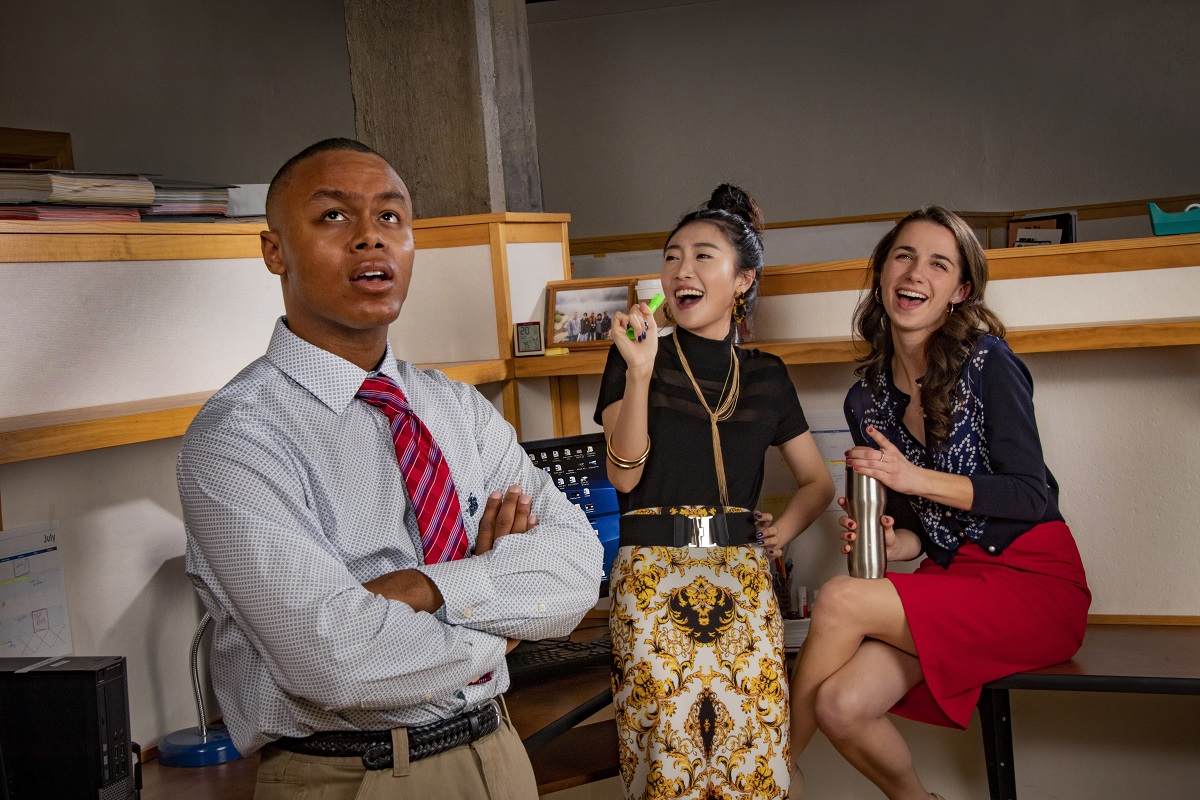 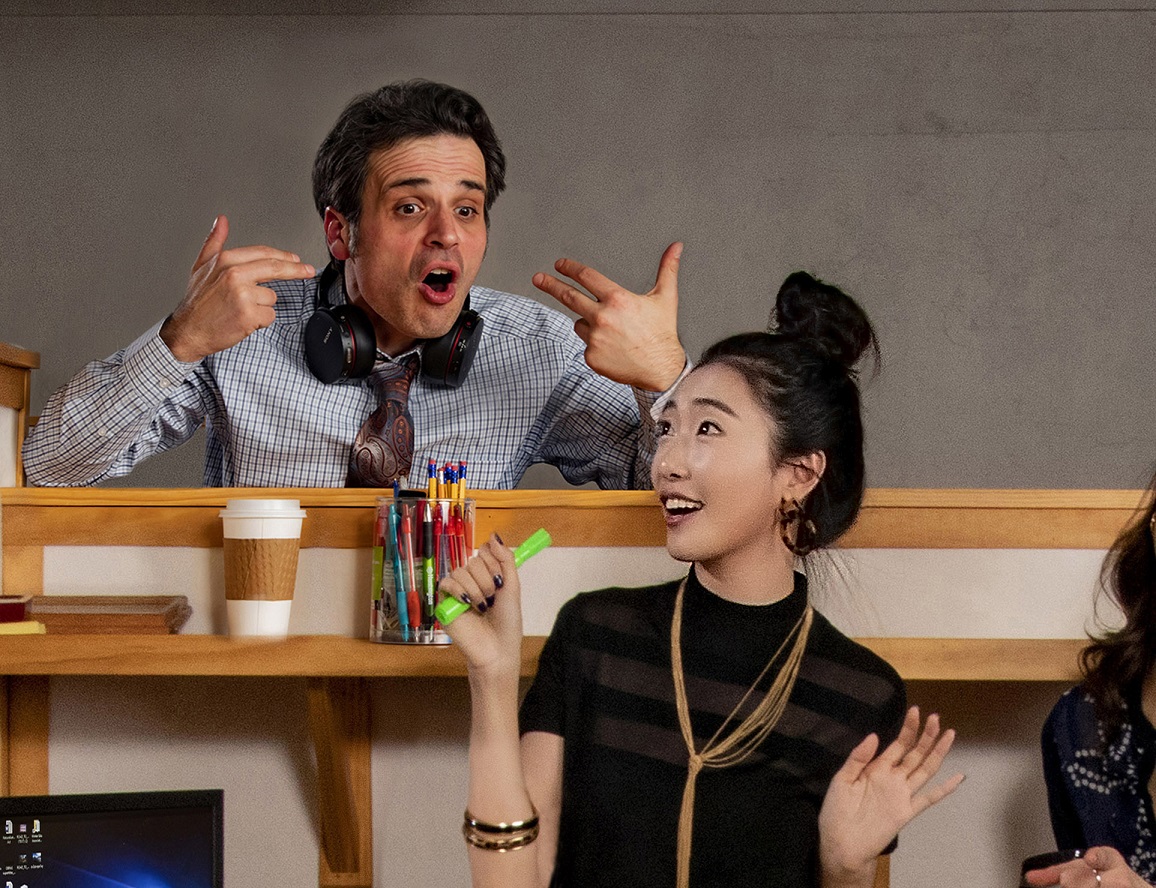 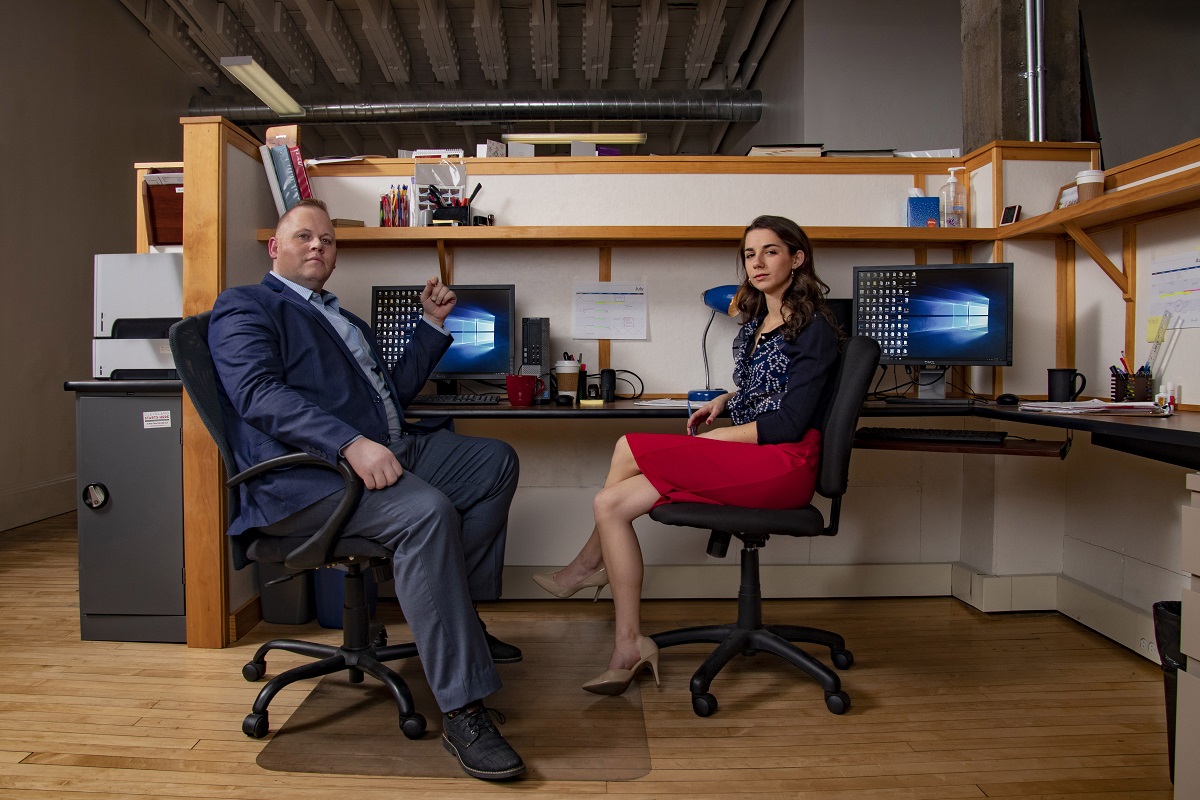 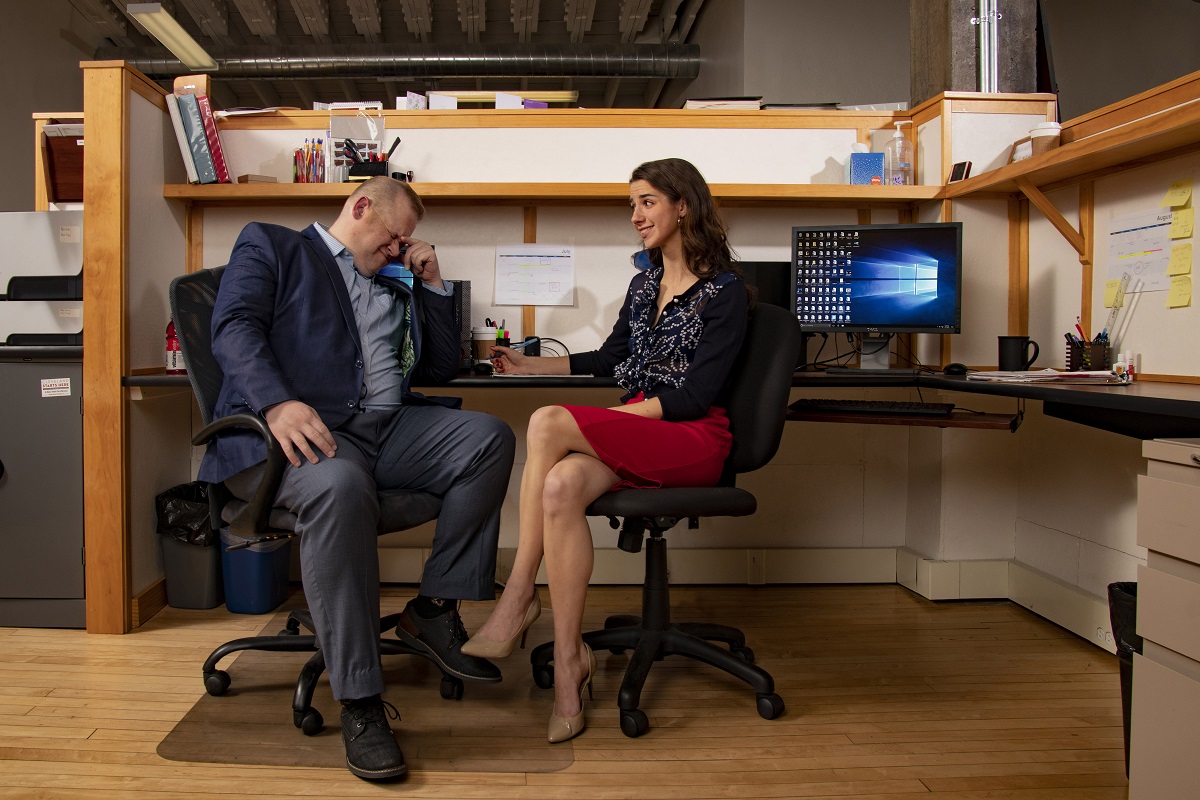 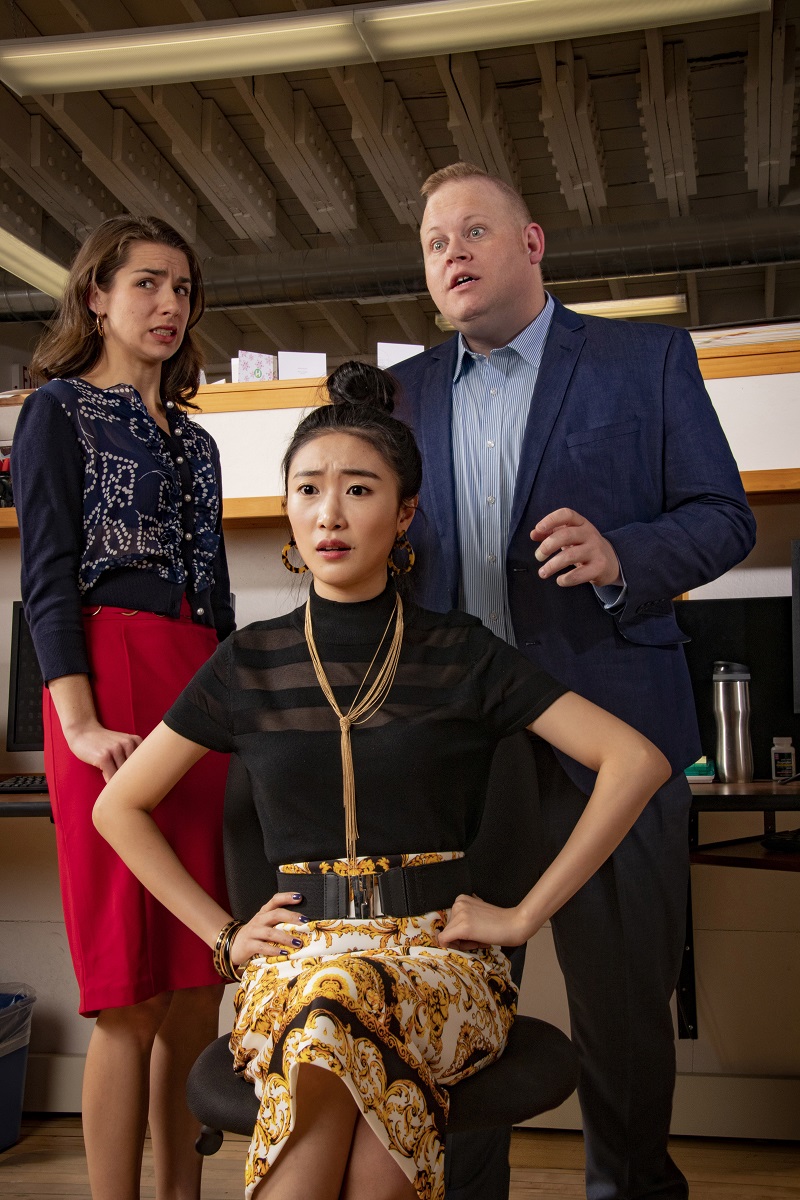