The River Bride: Reenvisioning a Folktale

Everyone's A Critic - Review of The River Bride

Marisela Treviño Orta’s play, inspired by Brazilian folklore, addresses many contemporary issues, including women’s positions in a secluded community, love & trust, compromise and its price, and sibling rivalry. With the hung panels and different levels of platforms on the stage, the director Bridgett Martinez did wonderful work in visualizing the interior and exterior scenes (Benjamin Gantose, set designer/lighting designer), invoking the audience’s imagination through the sound of water (Megan Slabach, sound designer). The powerful performance came from an ensemble of performers- Lilyvette Acevedo, Alisha Caraballo, Ricky Ortega, Gil Peña, Camila Piñero, and Jono Rodriguez. They play each character in a way that the audience can grasp different roles imposed upon men and women in the period (a long time ago, and costume designer Desiree Monique Anderson accentuates that period-ness), which certainly resonates with some aspects of today’s society. This play makes one rethink and re-examine what we take for granted as a folktale–for example, what’s so good about transforming from an animal to a human, knowing that the world of humans is so filled with miseries, hatred, and betrayals. Why does that “magic” require one to commit to blind love and trust, which leaves no space for intellectual and logical quests (like Helena does). 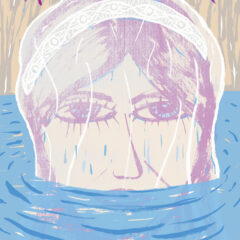 Amazon folklore and lyric storytelling blend into a heartrending tale of love, grudges, and transformation.