Raymond Bobgan named one of Cleveland’s Most Interesting People! 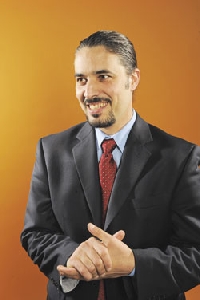 In the January, 2009 issue of Cleveland Magazine, CPT Executive Artistic Director Raymond Bobgan was chosen as one of the Most Interesting People! You can check out who else made the cut and read all about them by clicking here!

The full article on Bobgan is below.

Why he’s interesting: Bobgan, who writes, directs and produces some pretty cool plays himself, guides Cleveland Public Theatre in staging experimental Ohio premieres from new (and often local) playwrights, including a program in which formerly homeless men write and perform original plays.

Old (stage) hand: A native of Santa Barbara, Calif., Bobgan got the theater gene from his mother, who directed plays at their church. By the third grade, he was directing. By the sixth grade, he was writing his own plays.

Artistic process: Bobgan says his work with homeless men in transition has had an incredible effect on his sense of compassion, justice and self-awareness. “It’s this group of artists who are in the process of very actively reflecting on their lives and attempting to grow and change. That’s something that all artists should be doing, and these men have an opportunity to do it actively…because it’s a life-or-death struggle.”

On his nightstand: “I really like to read juvenile fiction, for some reason.” Favorites include Philip Pullman’s His Dark Materials trilogy and The Wind-up Bird Chronicle by Murakami. He is also a huge T.S. Eliot fan and hopes to someday make a play based on his “Four Quartets” poems.

He’d like to see more…: Original work. “There’s not a lot of people doing that in Cleveland. What makes CPT amazing is that people across the country…know about it. We’re recognized from people in our [industry] more than we’re recognized in Cleveland.”

On Cleveland theatergoers: Cleveland has audiences that are “really smart and not pretentious.”