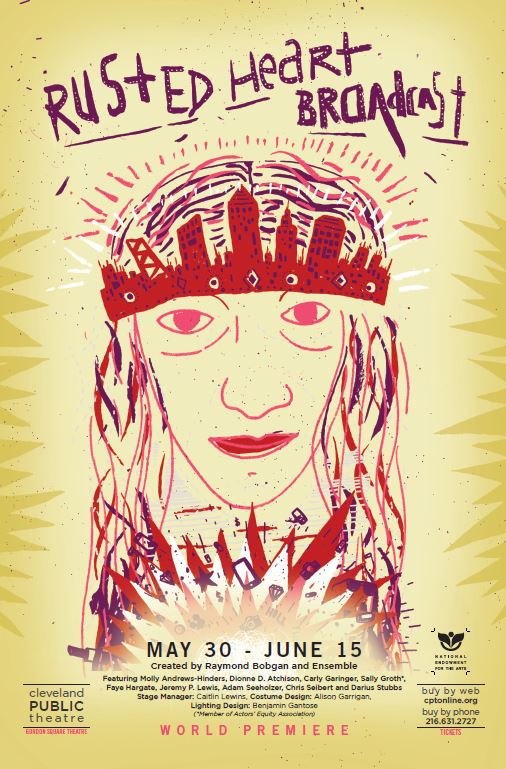 Created by Raymond Bobgan and Ensemble

"Rusted Heart Broadcast" is an epic production with powerful visual elements, original music, and fast paced story telling. In a pandemic of technology-induced "sleep", a small group of survivors act out the mythic origin of the "virus" in order to stay awake - to stay alive. They tell a story of Cleveland-born Kaysha who travels to Hollywood to become a star and is enlisted by softnet, a company developing a new technology line that connects people to the world-wide-web without a device. WORLD PREMIERE.

Take advatage of $10 Mondays and Thurdays every ticket in the house only $10 or FREE BEER FRIDAY – Stay after the performance on any Friday performance to mingle with the artists and enjoy a FREE drink on CPT.

The Beta-Tests are complete and the softnet is coming any day. You gotta get the soft, it’s like surfing without the board. No screen, no mouse, no keyboard, just you and the world. It’s your world.

As Kaysha tries to escape softnet, her fight for survival becomes a struggle for the future of humanity.

Blending a contemporary story and dialogue with material inspired by ancient Gnostic texts, Rusted Heart Broadcast interrogates the conflicting messages confronting us every day that promote contradictory values underpinned by consumerism and a religion of fame.

Conceived over the last three years, Rusted Heart Broadcast is a culmination of a collaborative ensemble-based process which engages actors in the authorship of the play. Featuring Bobgan’s hallmark style, the show is a visceral montage of movement, music, storytelling and action that celebrates Cleveland values and the aspiration to live fully.

Note from the Director Years back while teaching a series of workshops I began to use open-ended framing devices – stories that would allow us to quickly give context for diverse and unfinished work being created in the workshops. A framing device that seemed very effective was one in which a group of people come together to ward off a sickness. Sometimes the sickness was a sleeping sickness, but other times it might be sickness of memory or listening. As I began to work on Rusted Heart Broadcast, I knew I wanted to adapt this frame to a larger show, and I knew I wanted to connect two seemingly disparate motifs – Cleveland values and pride, and ancient religious texts from the Gnosticism tradition.

As the work developed, we struck on the idea of a lone woman who knows she has something special but who is confused about how to share it and the context of a post-pandemic world. So many ideas and themes come to play in creating a work like this but here are a few links to powerful sources that have shaped, inspired, and challenged us.

What the cast of Rusted Heart Broadcast have in Something unique about Rusted Heart Broadcast is that every member of the ensemble is, or has been, a teaching artist for CPT’s ground-breaking education programs, a core component of our mission to nurture compassion and consciousness in our community. While our main stage productions often feature professional artists that work with our education programs, never before has an original CPT production featured an entire ensemble of CPT teaching artists; including Education Director, Chris Seibert and Education Associate, Faye Hargate.

At CPT, we believe that everyone has a story to tell and through arts-centered, long-term, performance-based education programs, we celebrate the artist within all of us. We focus on groups of people who are often excluded from art-making, and partner them with teaching artists, like those in Rusted Heart Broadcast, to create original works of theatre.

In each of CPT’s three core education programs, Student Theatre Enrichment Program (STEP), Brick City Theatre, and Y-Haven Theatre Project, each participant is considered an artist and is fully involved in the creative process. Together with teaching artists, participants create original works of theatre by contributing to the words spoken, the movement and the production elements.

The creation process used in our education programs is grounded in the same techniques and principles used to create our original, professional productions. Performing in Rusted Heart Broadcast is not only an opportunity for this ensemble to nurture their artistry, but it’s also an opportunity to hone the creation tools they use as teaching artists. At CPT we believe in supporting the complete artist, whether professional or a member of the community, and it is this commitment that inspires us on a daily basis.

Learn more about our education programs. The Hymn of the Pearl (found as part of the Gospel of Thomas)
Trailer to Fallout 3, a post-apocalyptic video game
Inspiring music:
Beats Antique complete with Belly Dancer
And more Beats Antique without Belly Dancer
Four Tet (akarui hold-over)

How would you describe what Rusted Heart Broadcast is about?
There’s been this sleeping epidemic and Rusted Heart Broadcast, a group of survivors, comes together to stay awake in order to stay alive. Within that there are a couple of other story threads going on, one of which is about this woman, Kaysha, who has had some type of connection with all the people in this group. So it’s about their comment on how she brought life and vitality and presence into their own lives and inspired them.

Can you explain how the epidemic happens?
It starts with this technological advancement that orients the brain to the web. Then a virus starts to spread through that and people become hooked and addicted to this web. Since they are mentally “linked in” it becomes hard for them to differentiate between what’s going on in the web and actual life to the point where they are not be able to get basic needs such as food and sleep.

So basically, they are so addicted to it they forget the rest of the world is out there?
Exactly, which is really interesting because we are currently in such a technologically connected world– with so much political, cultural, communal discourse on line that it begs the question of ok how do we interact when we are face to face.

Have you felt that in your own life that you have been disconnected from reality?
Yes and No. Something like Facebook, when used in the right way, is very interesting because it allows you to stay connected with a broader community and reach people you wouldn’t normally keep in touch with, which I think is really cool. However, for instance with the smart phone – I was very wary of getting my smart phone because I did not want to be linked in all the time or feel like I needed to have it by my side. Since getting the smart phone I’ve made sure to have intentional time away from it. It’s the world at your fingertips. It’s a constant source of entertainment and information, and it’s hard not to check. I hate trying to have a conversation with someone who is texting incessantly. There should be an etiquette of leaving technology to the side when interacting face to face with someone.

Why do you enjoy working on devised works?
I like working on devised works because the picture is always changing and coming into focus. While in rehearsal, there are really specific tasks that we’re trying to accomplish for example like getting this song down and its structure, this piece of choreography down and its structure. Then depending on how that plugs in, the story changes. So the story is continually changing, and your role in it is constantly changing. The play continually becomes deeper, richer, more layered. It’s really cool how organic the texture is brought into the piece.

What is your role in Rusted Heart Broadcast?
Everyone has multiple roles they play throughout the piece. The ensemble tells the story of Kaysha, a woman pursuing to be a star and finding her true self, and along the way the ensemble plays different roles her life. I portray some of her ancestors and also am able to portray contemporaries in the piece that challenge her. So it’s very interesting being able to play people who support and encourage Kaysha and those who challenge and test her.

In this devised piece how did you guys come with choreography you mentioned earlier?
So Raymond will have a goal, like we need to get into this position or we’re going into this scene, how can we get there? He’ll give us certain stipulations: we’re in a certain place, we have only so many counts to get to there and you need to fill the space. He’ll give these guidelines and say GO and sometimes it’s like – “Alright, you want us to do what?- Alright, let’s try it.” So we’ll make propositions and most of the time he’ll use our propositions as a base and then tailor it here and there, fine tune and make sure it looks good. Once we have a physical score, we can add song and text on top. There are other times where we need to propose something and there are no stipulations for what needs to be in it except for a broad theme and you go off and create that then come back and then he’ll put it all together with everyone else’s proposal. The ensemble is really co-creating with Raymond.

Why do audiences want to see this show?
I think that everyone has that question of what is my purpose, why am I here, how can I be authentic and true, especially in this day and age of technologically connectivity, and Rusted Heart Broadcast speaks to that. There is also, of course, an awesome ensemble, great music and choreography. It is very visually stimulating.

“…you’re not likely to find a more stimulating production than the world premiere of Rusted Heart Broadcast…”
Christine Howey, Rave and Pan

“RUSTED HEART BROADCAST will send you out of the theatre questioning your own life, relationships and priorities. It is indeed an unforgettable piece of theatre.”
Kory, The New 102