Insomnia: The Waking of Herselves 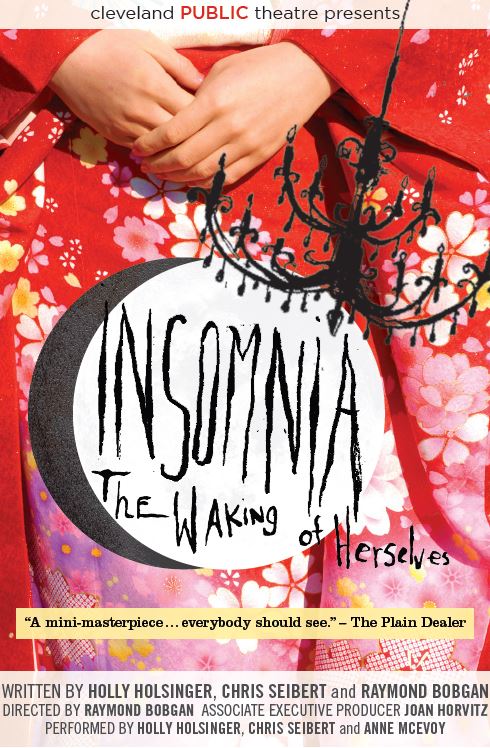 "Insomnia" returns to CPT! Ev is trapped in the attic; Evelyn is fronting downstairs; and Zelda, a former imaginary friend, has returned to remember the past and rekindle the will to return to reality. "Insomnia" delves into the innermost thoughts of one woman on the brink of dramatic change - death, flight, mental collapse or self-discovery. SECOND US PRODUCTION/NORTHEAST OHIO CREATORS.

“A mini-masterpiece… [that] …everybody should see,” (The Plain Dealer)

Take advantage of $12 Mondays and Thursdays where every ticket in the house is only $12!
or FREE BEER FRIDAY – Stay after the show on any Friday performance to mingle with the artists and enjoy a FREE drink or two on CPT.

An Interview with Holly Holsinger a

Why did you create Insomnia and what was your inspiration?
I had for a long time wanted to create a piece where I was one of the primary artists, where I could really have a strong voice in the piece. And I’m a chronic insomniac, so I knew pretty early on that it’d be called Insomnia, because it’s something I’ve been grappling with for years. I had eventually brought us, because Chris joined me in this endeavor, to a place where we were really interested in the voices in our heads, especially as women. I just felt like women have a lot of conversations going on. I think all people do but I think our conversations are, you know, different because of who we are. We had the idea that maybe all of these conversations were what was keeping us up. We were also interested in the short stories of Anais Nin and there was something period about her writings that interested us. We didn’t know why, we had no idea how any of this would come together, but we had about 2 years to follow our whims and explore psychology and these short stories and go off writing on any old thing that peeked our fancy. We gave each other a lot of assignments, we found a lot of pictures, we created music. It was really the first time in our lives where we had that kind of time: where there wasn’t a deadline, there wasn’t a date on the calendar when this had to be shown. So it was really just fun letting things come to fruition and eventually we started putting together what felt strongest or felt most attached to us. We had some help, we had a lot of beginning outside eyes, and we’d do works in progress showings just to get some feedback.

In your words, what is it about? In some ways it’s about the voices in our head that keep us up at night. In a parallel way, it’s about a woman divided who has not been true to herself and has compartmentalized her life. She has banished parts of herself that she can’t deal with or face right now to the attic, which is some kind of metaphor for one’s mind, and she’s gone on living a false life downstairs. Meanwhile, these banished parts of the selves are playing, but also conniving, to reunite and get her to face what’s happened to her life. And eventually they get her to come upstairs and battle it out. A lot of play happens. In some way I feel like this play is really attached to my childhood, I’m sure Chris would probably say the same. These two selves spend some time in the attic playing, pretending, reliving scenes from the past or from movies they love or games that feel attached to childhood: some of them to get the woman to come up, some of them to pass the time. They all appear as childhood games but then go to somewhere really grown up. It has that childlike feel but where it goes is really deep, disturbing questions about, well I suppose about middle age, in some way. I think that’s also that brought both Chris and I, even though I’m a little older, to the piece’s, I don’t want to say crisis, but the questions that come to you when you’ve reached the midpoint of your life, like “What have I done and is it what I wanted to do? Is it enough and do I still have time to do anything else and am I worthy and am I still beautiful?”

I hear that Chris is your imaginary friend, could you speak on that? When I thought about imaginary friends I realized, “Wow…”, I didn’t have an imaginary friend, I was constantly conversing with imaginary people my entire childhood, probably into my teenage years. I grew up in Idaho and I had a big mountain in my backyard and I spent a lot of time sitting alone in a tree or at the top of a hill talking with people and looking at the sky. I must say that’s kind of how I feel in this piece, it’s not one, there are lots of imaginary people I have these conversations with. I definitely had a whole community of imaginary friends. And I’m not sure they were all my friends. Yea, I had an imaginary community with diverse folk.

Can you tell me about approaching the work for a second time?
We’re still in rehearsal, some of it we’re changing. So this opportunity to do it again is an opportunity to make it better, so I feel like we’re cleaning it up a lot, and we’re especially working on the end to make it clearer, how it all finally comes to resolve itself which, I’m not sure was totally clear last time, it was to us. So that’s the work we’ve been doing this week actually, and you know, it’s tough. It reminds me of creating in the first place: it takes a lot of time.

It was originally produced 2 years ago. Has the way you, Chris, and Raymond changed personally influenced the direction of the work?
We think so, that’s one of the questions that we asked ourselves coming back to it: “who are we now”? And the way we make sense of some things is a little different than last time and we allowed ourselves the freedom to find what it is to us now instead of trying to reproduce exactly what we had before. And I think we are a little different, I don’t know if I could tell you how. It does feel a little different and I think will appear a little different.

On Facebook, we asked our friends if they had or have imaginary friends! We have some pretty creative friends, here are their answers:

Taylor Bailey
When I was very young, my grandfather, or “Pops” and I were in the park. Now, my family was pretty used to my being a little overly imaginative, so when I started screaming that there was a boy struggling to swim in the river where the water was perfectly still, Pops knew what he had to do. He waded out into the river and saved the struggling invisible child. When we arrived back at my home, Pops announced that “all three of us are home!” My mother was very confused. She was quickly introduced to Louie, who would live with us for quite a while. Louie was incredibly mischievous. He was always hanging from the ceiling fans and climbing up the fireplace and getting stuck in various places. My family were all great sports and constantly helping Louie out if whatever he had gotten into. He also took the bulk of the blame for most messes and situations that would arise. Then the family grew. Louie had a girlfriend, LouieBadon. Then the parents, LouieDon and LouieBadooey. Oh and LouieBadooeyHooey. There were many many adventures. And then one day, I announced that they all had to move. We all stood in the front yard and waved them away, off to their next adventure. My family loves to tell the stories. I however cannot remember Louie at all.

Linda Browning
I always had imaginary horses, & there was a little boy whose name was Walnut Alan Tin- my mom thought I was schizophrenic & took me to the DR. but the doc said I was just creative. (I’m 62 now.)

Melissa Crum- 2013-2014 Joan Yellen Horvitz Director Fellow
I had an imaginary friend named Lonnie, we put on plays in my backyard. Typical audience in attendance included piles of leaves and my dog Scooter.

Catie Dargue- Director of Development
Tim from Jurassic Park. Seriously, a Joseph Mazzello look alike named Tim. I really just wanted a little brother and he was pretty cool. Then as the actor got older that turned into a crush which is actually pretty strange when I think about it now.

Zachary De Nardi
…my imaginary friend was… no joke. Jesus.

Carly Garinger
I can’t really remember… I think I used have an imaginary black puppy dog that followed me around to school and slept next to my bed. I also remember that my friend Annie and I created an imaginary place in my backyard called Laku Lagoon and we both had magic names to get inside. Laku Lagoon was filled with many magical mystical creatures. We played there A LOT.

Faye Hargate- Education Associate
Anything fey for Faye… pretty sure her name was Barbara.

Elizabeth Ullman Jaszczak
My cousin and I had an imaginary friend named Bessin. Sadly, she met her demise when she contracted the Hong Kong flu from the gold domes at St. Vladimir’s church in Parma.

Andrew Kramer
For years and years I used to battle with an imaginary Ursula the Sea Witch, who would creep into my room at night.

Rose Leininger
Yes I did and this reminded me of her. Wow.

Jane Lewins
Mine was Guessy!!

Lynna Metrisin
I remember walking home from school when I was about 6 or 7 with my imaginary friend, Bella and I think she had a twin sister, but I can’t remember her name.

Rachael Sauber
Yes! She was my imaginary twin sister, Rebecca.

Do you have an imaginary friend? Leave your answers HERE and you’ll make it onto the CPT Website!

Insomnia Performs in the Catskills

“NACL Theatre is a professional, not-for-profit company that has created over 15 original and ensemble theatre productions since 1997. Founded by Canadian-born Tannis Kowalchuk and American Brad Krumholz, NACL (North American Cultural Laboratory) operates a theatre space and retreat center in Highland Lake, NY, located two hours from New York City in the southwestern Catskills region. The company creates and tours its own original and devised theatre performances, collaborates with an international circle of artists, and presents a performance season that features work by local and visiting artists. Committed to supporting theatre training at all stages in an artist’s development, NACL offers artist residencies, professional development retreats, master classes, workshops, and early education drama classes.” (From the NACL Website)

Click Here for more information about the Event at NACL Theatre

Other Artists Inspired by Insomnia (the disorder)

Large Scale Thread Installation
Fueled by an affinity for sleep deprivation, Pae White creates a “large-scale structure [that] echoes one’s endless stream of thoughts when they are robbed of a good night’s rest and come face to face with too much time to themselves”.

Insomnia and the Poet
A woman explores the romanticism of Insomnia and what happens when we relate the inability to sleep to “merely” physical abnormalities rather than racing thoughts.

On the Other Side…

Moon Phases Tied to Sleep Cycles
Do we have a lunar clock in our brains?

Insomnia: The Waking of Her Selves from Raymond Bobgan on Vimeo.

Clips from the critically acclaimed Insomnia: The Waking of Her Selves.

Insomnia: The Waking of Herselves- Audience Interaction Piece from Raymond Bobgan on Vimeo.