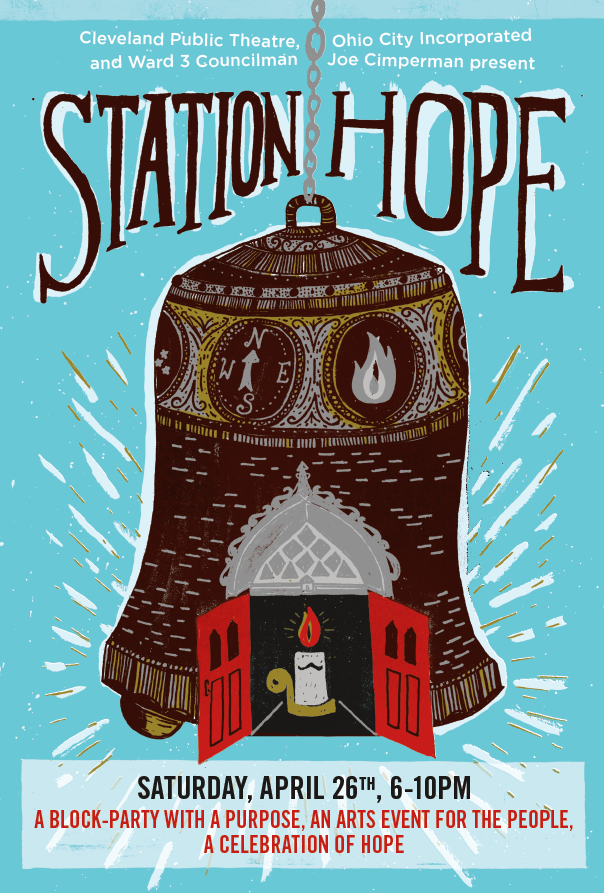 Station Hope was created in partnership with St. John’s Church and The Episcopal Diocese of Ohio, Friends of St. John’s Church, Restore Cleveland Hope and the Cozad Bates House, Cuyahoga Metropolitan Housing Authority, The City of Cleveland, Cleveland State University, and over 25 participating arts groups and individuals from the Northeast Ohio region.

Based on Cleveland Public Theatre’s past success producing large-scale public performance events, including Arts In August, pARTy in the Gordon Square and CPT’s annual Pandemonium event, Station Hope offers audiences of all ages a rich, engaging experience created by local professional and community-based artists across many disciplines.

CPT will stage this event on one of the most historically significant sites in Greater Cleveland – St. John’s Episcopal Church or, as it was known on the Underground Railroad, “Station Hope.” Audiences will tour through St. John’s sanctuary, parish hall and intricate basements to view an array of short performances of dance, theatre, storytelling and music. Visual art displays and interactive art activities permeate the event while choral performances set the atmosphere of the outdoor spaces in and around the church. St. John’s Episcopal Church is located at 2600 Church Street in the Ohio City neighborhood of Cleveland. St. John’s is the oldest consecrated building in Cuyahoga County. As a church active in the Underground Railroad, St. John’s was a last stop for fleeing slaves seeking their freedom across the waters of Lake Erie and the church’s steeple acted as a beacon of freedom.

Ticket & Show Information
Station Hope will take place on Saturday, April 26th, 6pm-10pm at St. John’s Episcopal Church, located at 2600 Church Street, Cleveland, OH 44113. Station Hope is a free event and open to people of all ages.
Performances will take base on a rotating basis throughout the St. John’s Episcopal Church and adjoining buildings, as well as outdoor spaces surrounding the church.

**Note: Due to the historic construction of the building, some interior spaces may not be accessible to people with limited mobility.