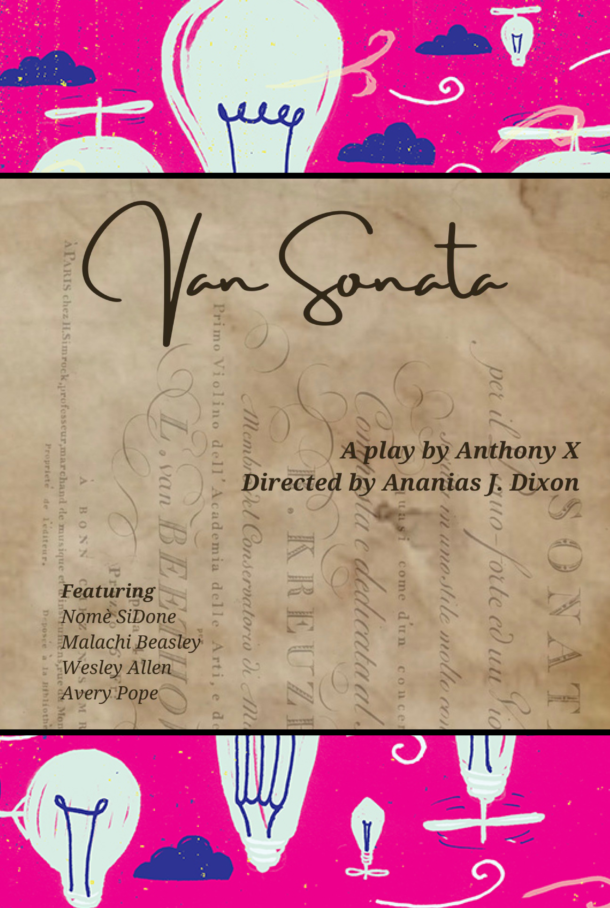 This is a reading, an exploration, a play in fragments. Van Sonata is a quilt of three storylines tied together: a Black British composer’s first tour in America while being interviewed by a Black newspaper, two Black reporters uncovering a myth, and two musicians in a romantic and artistic partnership. It’s about media, music, and myths, and how claiming space is a physical act.

Ananias J. Dixon is a theatre teacher and coach at the Cleveland School of the Arts, Cleveland Play House, and Playhouse Square. Theatre credits include Good at Heart, The Family Claxon, How to End Poverty in 90 Minutes (with 119 people you may or may not know), Rastus and Hattie (Cleveland Public Theatre); Skeleton Crew, Sunset Baby, The Effect, An Octoroon (Dobama Theatre); Detroit 67, Julius X (Karamu House); Black Angels Over Tuskegee (Actors Temple); John Henry (Cleveland Play House); and The Toilet (New Federal Theatre). TV/film credits include “Law and Order: SVU”, “Blue Bloods”, “Person of Interest”, “Boardwalk Empire”, “Upstairs”, “NYC 22”, “Antwone Fisher”, “Home_”, and “Criminal Activity”. Ananias was also part of Cleveland Play House’s New Ground Theatre Festival as the Assistant Director for The Nolan Williams Project as well as Assistant Director for The Royale under the direction of Robert Barry Fleming.

Anthony X (he/X) is a blk actor and writer. A Cleveland native, who is currently pursuing his MFA in Acting at the Yale School of Drama. X’s play, Van Sonata, is an exploration of many questions that come up for him. Van was first proposed in an actor-generated work course at Yale.