Everyone's A Critic - Review of Breakout Session (or Frogorse)

What happens when a tragic murder involving a police officer results in a visit by the United States Deparment of Justice and is followed by a Consent Decree? Cleveland Public Theatre’s production of Breakout Session (Or Frogorse) brings a close up, conference room view of one of the outcomes, namely, a police department in-service training demonstration. And in this case, it’s the Cleveland Police Department.

There was no mention of the actual events that precipitated the current federally mandated measure here in Cleveland. In fact, the incident mentioned in the script had to do with a police officer who was killed in the line of duty. Three officers, one of whom was the fallen officer’s partner, attend a workshop on strategies for building empathy. Their experiences and the experiences of their facilitator and her supervisor are woven into an extremely intricate web of conflict and self-actualization.

First, there’s workshop facilitator Sara Benton (Jess Moore) and her supervisor, Jessica Moore (Nicole Sumlin). Their conflicts unfold as the session progress. Supervisor wants it done by the book. Subordinate wants to think outside the box and interrupt, a common theme expressed in this story.

Then you have the officers, first of which is Officer Preston Walker (Jimmie Woody). He is the partner of the one who lost his life on the job, blamed for the tragedy, and hazed by other officers. His conflict is with Sergeant Karen Spencer (Tina D. Stump), a Field Training Officer who displayed obvious disdain for her fellow officer.

Playwright Nikkole Salter masterfully crafted a multi-layered look at how implicit bias and perception affect human behavior. It was edgy in that it rang true with the discomfort of confronting racism head-on, depicting how people lose lives as a result of assumptions based on how people look. Black people and other people of color are more often the victims of police brutality than whites while significantly being outnumbered. Often, this occurs because police officers default to biases that demonize them.

The officers participating in the workshop were also used to depict the pressures of the occupation, as they are often simultaneously seen as saviors and villains. Salter provided another layer of complexity by assigning dual roles to her characters with a zoomorphic angle that comedically illustrated the limitations of their perspectives.

Sergeant Spencer becomes a crocodile whom others in the session are forced to tip toe around. Clearly the antagonist, she demonstrates an unwillingness to embrace the training aimed at enhancing her empathy. Her reptilian nature is an impediment that won’t allow her human nature to rise above animosity, effectively sabotaging what she considered to be “crappy curriculum.”

In an ironic twist, she also plays the role of a magician who, with the assistance of her cast mate Nicole Sumlin, waves a magic wand and a transforms a yuppie into a thug.

Sumlin doubles as a catfish comedian who performs a set that has her cast mates providing canned laughter through her stand up routine about the painful realities being faced by marginalized communities discriminated against due to implicit bias.

Woody elicits vulnerability and reels in compassion with his rendition of “Somewhere Over The Rainbow.” His animal of choice as the ostracized officer is a canary. During the magician scene, he’s seen as a Black man murdered by police as he reaches for the wallet in the breast pocket of his blazer.

A central character emerges to tie all loose ends. It is Mantis Shrimp (Beau Reinker), an interrupter who has the uncanny ability to see beyond the capability of human beings. Its capacity to do so illustrates perspective in a somewhat whimsical way, but underscores the fact that there are so many angles and complexities in our society that must be considered if there is ever going to be any real change.

Breakout Session (Or Frogorse) puts the viewer through a two-hour experience of the American reality of a system of racism. From this reviewer’s perspective, it demonstrates the futility of process and procedures that exclude the equality of all human beings through the suspension of disbelief provided by theatre. At its core, it forces theatre patrons into their own personal workshop for building empathy. In its strategically awkward moments, it effectively exposes the frailty and dysfunction of our law enforcement system and calls for a transformation of toxic police culture.

This piece was superbly directed by Beth Wood. The actors delivered a cleverly choreographed dance around the elephant that stares into the eyes of those who pretend its non-existence.

Frog or horse? Reptile or mammal? We must see both, but change can only come when divinity becomes the interruption that eliminates struggle. 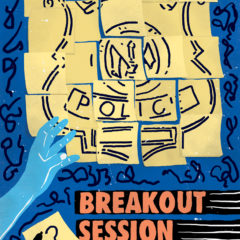 Can a society legislate a change of heart?