Everyone's A Critic - Review of Panther Women: An Army for the Liberation

It is challenging to write and stage a show about the tumultuous time-over 50 years ago through compelling characters and their “voices.” India Nicole Burton’s Panther Women: An Amy for the Liberation weaves different narratives from three Panther Women’s autobiographies to create a Shange-like poem/drama/performance piece. They are Assata Shakur, Angela Davis, and Elaine Brown. Seven ensemble women become their (characters’) grandmothers, mothers, descendants, their panther “brothers.” A common thread of these women is their struggle to implement good and necessary programs while fighting and pushing back chauvinism within the movement. They constantly needed to validate and work. They needed to protect the movement as well as their family. I am reading Elaine Brown’s A Taste of Power, which illuminates her aspiration, hope, disillusion, and restitution (in their own terms). Actually, I met Brown some time ago and I had her book (signed) on my shelf. With my busy schedule and eye problems and so on, I did not open this book until recently.

Burton’s piece used the first part of this book, explaining her house on York Street in Philadelphia and her ascension to “power” in 1974 when she took the place of Huey Newton. By then, the most prosperous and aspiring period of the Black Panthers had been long gone. So taking over the leadership position of the group with so many internal conflicts and problems, particularly as a woman in the 1970s–was more than challenging. Elaine’s journey itself would become Burton’s second play (Yay!)

I loved the Angela Davis portion, particularly her gun used by Jonathan Jackson is well known to many of us. Her upbringing is in Birmingham, Alabama — so the set designer Nina Castillo-D’Angier hung three small church windows and placed one big window on the stage as a memorial metaphor for the 1963 Church Bombing. Moneé Stamp’s lighting design complements the set with stairs, carts, crates (which remind me of ammunition boxes), a damaged wall panel, and the church windows.

I was very curious about costume choice before I saw this show. I expected to see the 1960s and 70s jeans, shirts, and hairdos. Contrary to my expectation, the costume designer Marti Coles created all-black dresses, skirts, pants, and shirts. They all have silver chains — perhaps as a metaphor for captivity as well as defiance. The chains also symbolize the journeys women take to become ancestors. Marti told me that “at some point, we all become ancestors.” To illuminate that, Coles used “fewer chains for the character who represents the start of the journey of becoming an ancestor. The Journey character–played by Ash —has the largest number of chains.” 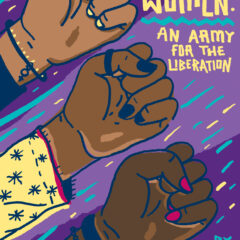 Explore the lives and unique experiences of prominent Black women in America.