A compelling and moving work emphasizing the importance of building bridges

Everyone's A Critic - Review of وبعدها التقينا And Then We Met…

The Masrah Cleveland Al-Arabi مسرح كليفلاند العربي production of وبعدها التقينا And Then We Met… is a compelling and moving work that emphasizes the importance of building bridges between people with different cultures and beliefs. Centered on the people who fled the country torn by a civil war, the play includes first-generation immigrants’ struggles to support their families as well as keep their cultural heritage, younger generation’s liberal ideas and defiance, and challenges that those who remain in a home-country face. Directed by Raymond Bobgan and Faye Hargate, the performers include both experienced and newer actors of Arabic descent living in Cleveland. Different locations on the simple stage (designed by Hussein Ghareeb) suggest multiple locations in Cleveland and the hometown. Using a poem written by a soldier as a thread for the characters to trace back, the play explores the power of mercy, understanding, and kindness. The parents’ generation’s understandable but unfortunate focus on business and medical school for their children, which I have seen in many Asian American families, is portrayed with humor and pathos. The reunion is literal and also metaphorical, underscoring how personal and collective stories bring people together, building a new community.

This is the second full production by Masrah Cleveland Al-Arabi. They always cater fabulous free food, desserts, and music to  provide their audiences with a space for appreciation and dialogue, which I could enjoy only at the Cleveland Public Theatre in this area. 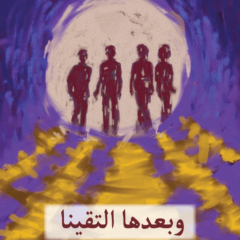 An original production created by the ensemble members with Raymond Bobgan & Faye Hargate.